UNIVERSAL LAW OF PROSPERITY DEFYING ALL OTHERS 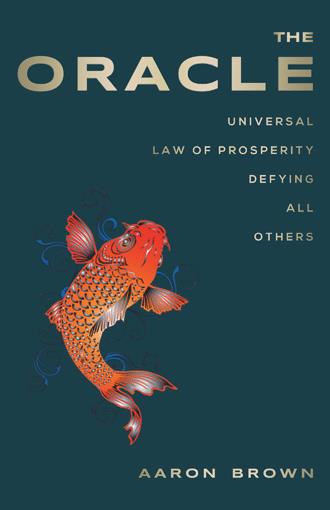 Universal principles permeate this world. Fashioned by a grand designer, they waver not, for what God says, is so. Period. Truth is absolute and stubbornly unyielding, even if the whole of humanity were to deny it. A wealth of prophecies circulate and surround us offering wisdom, guidance, and hope. But one prophecy stands alone from all others in significance and scope, and the fate of an individual will hinge upon his response to it. With astonishing life-altering potential, this single principle boasts promises almost too good to be true. Almost.

The Oracle is indeed radical. Enduring as the foremost prophecy in existence and lurking long before ever inscribed, its claims stand unparalleled and unprecedented. The promises claimed are as sound and readily available today as in ancient times when initially penned.

The Oracle is profound, ensuring the transformation of life and soul to the one who observes its principles. Remaining unbelievably simple in concept, few will take notice and heed its call, despite the assurances to quench our innermost longings.

The Oracle is universal and firmly established, though few have recognized the magnitude and tested its bold claims. The prophecies herein are alive and powerful, and ready to act in the favor of the one who commits to its philosophy. Sadly, the core precepts remain grossly unchallenged.

The intention of this book is by no means an exhaustive study, for certainly volumes could be written upon each chapter. Verses have been selected and singled out from their original context. I encourage the reader to go to the source and read them in the setting from which they were borrowed for both deeper conviction and further enlightenment. If at some point, the reader may deem the subject matter at all redundant, it is merely because it follows a similar recurrence throughout the Scriptures as each assured blessing is addressed. God’s motives for repetition in teaching us the path to prosperity are primarily two-fold, and anything but subtle. Firstly, no other principle comes close in prominence. All other standards, morals, and beliefs arise from the sole premise of the Oracle. Secondly, God knows we are extremely stubborn and willful creatures, necessitating continual prodding.

If the source and origins of the Oracle stem from the mind of man, its precepts are undoubtedly debatable and suspect. If the source is God, however, the debate is moot. A myriad of biblical verses will be noted and used to support the premise for this book. The Scriptures claim inerrancy, inspiration by God, and thus its contents should be trusted as such. To the person who treats select Scriptures as true and valid, while dismissing others as unreliable or false, I submit the entire Word of God stands on shaky ground, and will be entrusted only to the degree it aligns with the preferences and liking of that individual. The whole of Scripture is undependable to that soul and its wisdom and guidance altered toward the fancy of the reader. What is one to believe but that which one reckons believable? One must trust all of Scripture, or else toss it out completely on the basis of it being tainted and untrustworthy.

A popular idea exists presently whereby the power to transform one's destiny to heights of fruition stems from within each soul. What a person focuses his mind upon will determine the course of his fate, as he coerces the world into gifting his every whim. Positive thinking, the law of attraction, and the power of self may induce whatever you want the world to render you. Considering the air of truth that a confident and proactive individual is better apt to generate his desires into reality, the universe by no means obeys the demands of its creatures. If so, that would manifest each being as god, and personify said universe a living entity with no recourse but submission to the will of all man-exalted gods. While that may sound altogether fascinating and hope-inspiring to some, it simply is not true. No, the secret lies elsewhere.

The truths revealed will undoubtedly be mocked by countless people. While this is no shock, but rather expected, even predicted, this contempt poses no threat and matters little. Indeed, the totality of all scorn is inconsequential, for the premise of the Oracle endures regardless, just as the earth continues its abode long after we have departed. This depicts a far from perfect analogy, for as surely as the earth will one day be no more, the Oracle shall certainly live on.

While some scoff at the Oracle, others will cheerfully agree with its principles, briefly observe them, and shortly fall away from lack of faith and commitment. The majority will be easily distracted by the cares of this world and the illusions it boasts. Unfortunately, the mirage of this life is all too real for many to dismiss. And yet, I suppose if a person budges from point A to B or from point K to L in one’s life-long pursuit of God, perhaps all shall not be in vain.

But a few, a scant few, I dare say, will pursue God passionately. They will observe the Oracle faithfully. They will fear God and love Him for whom He is and not for what they might gain from Him. In these God shall take notice, and pouring upon them His boundless favor and goodness, He will award the treasures of life.

If you hold but one thing dear in this life, may it be this. Defend the Oracle with all facets of your being. Guard it with every faculty you possess. Observe the Oracle relentlessly.

“God pummeled me. My most horrific experience. Also my best.”

The Oracle is the enlightenment of a profound principle the author learned during a desperate season of his life. The power to transform a life finally awakened him. Embracing its message on one of his darkest days, he wrote The Oracle to revive hope and inspiration for the prosperity God offers each of us.

The Oracle assures prosperity to the soul who observes its message, and a curse to the one who rejects it. Promoting a shift in one’s mind, this universal law prompts wellness, abundance, hope, purpose, and a radically enriched life destiny.

Ensuring the transformation of life and soul, The Oracle boasts promises almost too good to be true. Almost.

After attending Moody Bible Institute in Chicago and graduating from Texas A&M University, Aaron Brown co-founded an eclectic cafe named Sweet Eugene’s in 1993. He has a burden for drawing people closer to God through writing, so when not slinging coffee, Aaron enjoys penning his thoughts in hopes of inspiring readers to pursue an enlightened path with purpose.