The Princess and the Pea . . . nut Butter Sandwich 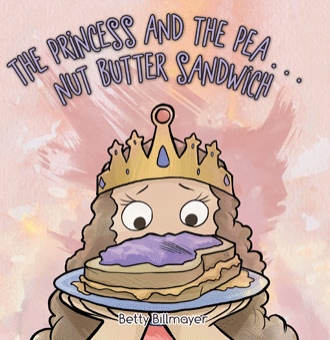 Posters were prepared on parchment paper proclaiming the news . . .

You are invited to participate in a plan to attempt to produce a perfect sandwich using Positively Perfect Peanut Butter.

Once you have produced and packaged it, you are to proceed to present it to Princess Pietra in the palace parlor at precisely noon on Saturday.

Whoever succeeds in doing so, thus providing Princess Pietra with the perfect peace she so desires, is promised a preposterously big prize!

The posters were pasted on poles throughout the countryside for all the people to see. And so it came to pass that, at precisely noon on Saturday, the princess, attired in her prettiest, poofiest, pink and purple party dress, proceeded to the parlor to begin to peer at the products prepared by people who came from near and far to present to the princess, with the hopes of pleasing her. She looked up politely as a pleasant looking fellow proceeded to show her his product. He had placed piles and piles of Positively Perfect Peanut Butter between two pieces of bread, and it was practically dripping off the plate. Perhaps he had put the whole pint in it! To peer at it was painful. Pietra pursed her lips and politely shook her head.

Next in line was a less prosperous looking lad who apparently had a problem with preparation. While placing the Positively Perfect Peanut Butter on the bread , he had poked too hard, tearing it to pieces, thus producing a terribly messy plateful. It was actually pathetic! Pietra couldn't even pretend to be pleased.

Next came the proud maker of a Positively Perfect Peanut Butter sandwich which appeared to have been painted with approximately a pound of plum preserves. It was apparent at this point that the princess was becoming perturbed. Her pretty little face turned into a pouty little face . . .

(Pietra began to ponder the idea that perhaps she might prefer a plateful of parsnips over these pathetic productions.)

And so on and so on they paraded by, a plethora of people presenting their products. There was a professor, a pirate, a policewoman, a pediatrician, a politician, a Pulitzer prize winner, a plumber, a poodle groomer, and more. It appeared that these people had the idea that practically anything found in the pantry could be added to a peanut butter sandwich. There were pickles and potato chips, provolone cheese and pepper, powdered sugar and peas. There was a sandwich that looked like a pizza and another like a pop tart. Even popcorn poked out from between two pieces of pumpernickel bread! And one fellow tried, somewhat pompously, to enter the parlor balancing a platter of Positively Perfect Peanut Butter sandwiches while riding on a pony!

Pretty little Princess Pietra (pronounced Pe-et-ra) is convinced that she will be able to find the perfect peace she has been pursuing by partaking of a perfect peanut butter sandwich. People come from near and far, hoping to please her with their productions, but Pietra ends up pouting. As her parents seek God’s help in how to best proceed, they all come to realize that perfect peace comes only from Jesus, a lesson beneficial to princesses of all ages.

Author Betty Billmayer has lived all of her life in rural Montana. She works alongside her husband, Mark, in the farming, ranching and cattle buying business. They raised three daughters and are now fully enjoying being grandparents. She and her youngest daughter published a children’s alphabet/photography book titled Apples to Zebras in 2015. Over the years Betty has written several skits that have been used at various events in their church. In fact, this book started out just that way, as a skit for a ladies’ luncheon.