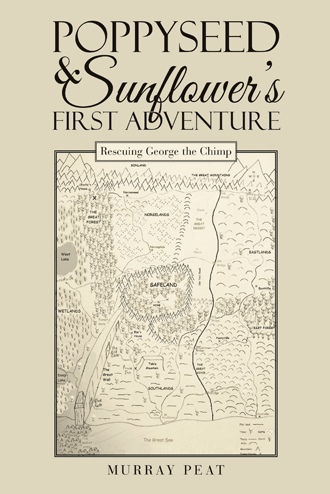 … It was just as well our trio made this decision, for a few meters down the grass track, they heard voices coming up from the south. Charlie told Poppyseed and Sunflower to duck down at once and keep still. Of course, they obeyed him instantly. The three crouched down and waited, and along the road they heard voices approaching.


“I’d much prefer to be at home in Southlands,” one was saying. “Hills, hills, too many hills!”


“Oh, stop complaining! Hey, here’s something to remind you of home. A sign.” He read the sign aloud.


The first voice then said, “Funnyville. What a silly name. But the boss probably needs it checked out.”


Sunflower heard this and realized they had to stop the men entering Funnyville for three reasons: 1) They were obviously the Prince’s men; 2) They might discover the greenstone mine; and 3) They might find and steal the Farmer Brown stories!


Sunflower then did something she had learned from the birds and animals in Safeland. She threw her voice, making it sound like it was coming out of the signpost. “Oh no,” said the signpost. “Hills, hills and more hills west of here. Take my advice, go north.”


The men were struck dumb for a moment. Then one replied, “A talking sign?”


“Ah, but not just any talking sign,” the sign answered. “No sir! You look tired. Eastville has great dinners and Bed and Breakfasts.”


“Just a minute. We’re not going to take the word of a sign,” said another. “If you’re such a smart sign, see if you can answer my three questions: Number One: What town do we come from?”


“Too easy, too easy,” replied the sign. “Your accent gives you away. You’re Southlanders from Southtown, of course.”


The man was obviously taken aback by this but pressed on with his next question. “OK, smarty sign. Number Two: Who sent us on our mission?”


“Do you really want to know?” the sign asked.


“Of course we do and quit stalling. Just answer the question. Do you know or don’t you?”


“Ah, but I do. It was the Prince of Southland whom you call King Prince. But Prince Pride is his real name.”


“How did the sign know about King Prince? No-one knows except us!” whispered one.


The other said, “Prince Pride? Never heard him called that before! But we must admit you are right about King Prince. But you’ll never answer Number Three question because it hasn’t happened yet!! Ha ha. Number Three: Who will be the next person up this road after we leave?”


Sunflower, it’s true, didn’t have an answer to this question. Her mind raced as she tried to think how to reply. Then she put her ear to the ground, a piece of advice Wootoo had given them earlier, and she heard something. The sound of a trumpet!


The sign replied, “Your Prince will be the next person and you will hear the sound of his trumpet to prove this. This being the case, I strongly suggest you get smartly to Eastville.”


The men laughed. “The Prince isn’t anywhere near here. He decided to take the West Route!” Suddenly a trumpet blew out clear and long. The men froze, then grabbed their bags which were resting on the ground, and ran as fast as their tired legs could carry them up the road.


The girls and Charlie laughed, thanking the true King in their mission to protect the people of this land from the error and bad advice of Prince Pride. They quickly picked up their things and beat a track through the long grass until they came to the edge of the Forest...

Beyond Safeland where the twins live is a world of fun-filled humorous adventure, lovable creatures and a few untrustworthy characters. Charlie the chimp lost his brother George when all the monkeys in the Great Forest were captured, and the race is on to find and rescue them. The unseen King Adonai promises a good and safe outcome.


Along the way, the twins discover secret mountain passages, accompany the acrobatic Hootoos, engage in story-telling, raft the rapids, meet Evie in the little Garden of Eden, help devise a rescue plan involving mushrooms, discover what truly is at the end of a rainbow, and make countless creature friends.

Entertaining through story-telling has long been a forte of Murray’s. Over the years he has delighted children and adults with his humorous and inspiring short stories.


Murray came to faith in Jesus Christ in 1968 and it was the best decision he has ever made. In his spare time he enjoys writing stories, piano improvisation, walking, café outings with friends, and has a travel blog at his ArmChairWorldTravel google site. He has 2 daughters and 8 grandchildren, and loves to spend time with them.


Murray has lived and ministered in New Zealand, Australia, England and China. He has been a pastor, missionary, chairman of various NGO boards, English teacher, medical receptionist, conductor, actor in a Chinese movie, operations manager for a large Christian social service agency, co-founder of an international business organization in Qingdao China, visited 42 countries, and he loves to befriend people of all backgrounds.