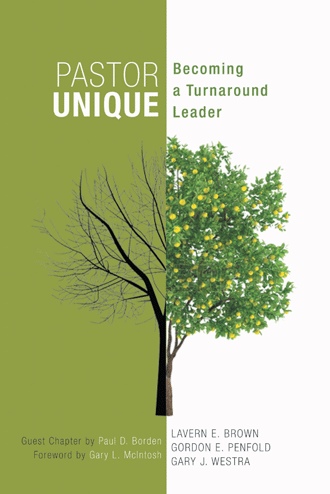 It is unlikely in the highest degree that this book should have been written and almost miraculous that it was. Credit the Internet. Or blame it, depending upon how you evaluate this volume's merits and faults.

The three of us met on a social media website frequented by those who practice the esoteric arts of pastoral ministry, clergy coaching, and church renewal. We discovered in one another kindred spirits who shared passion for the renewal of deteriorating churches, deep concern for the pastors who lead them, and a desire for greater understanding of why some pastors are adept at leading turnaround churches while most are not. We wondered if it was possible to discern an explanation that might lead to meaningful help for churches and pastors. Over the course of several months, our discussions led to the idea for this book.

The concept developed somewhat like an avalanche. It started slowly and progressed imperceptibly. Then it happened all at once and we were swept away by the power of the idea and a clear sense that we had been called to write. It began when Bud posted a question to Gary about the difference between the MBTI and The Birkman Method®. In time Gordon was brought into the discussion. We began to wonder what we might discover, and what we could contribute to church renewal literature, if we applied the Birkman to Gordon’s earlier research.

Suddenly, we found ourselves standing on fresh ground.

After the data had been gathered, evaluated and subjected to careful statistical analysis, we realized that the Lord had entrusted us with remarkable and occasionally surprising insights into the nature of effective turnaround leadership in the Church.

In our minds, the case was nailed shut when we went back to evaluate several successful turnaround pastors who had puzzled us. One, for example, was an adept turnaround leader even though the more familiar typing tools indicate that he is wholly unsuited for turnaround ministry. In contrast, his Birkman profile closely matches the turnaround pastor profile in six of seven distinctive components.

The research also revealed best practices that correlate to effective turnaround leadership. We settled on three purposes in writing this book. Our first purpose is to bring our research to the Church in the hope that pastors, church leaders, and denominational executives will understand which leadership behaviors promote church renewal and which behaviors hinder it. Our second purpose is to show how these findings can be applied profitably to several of the most vexing problems that confront declining congregations. Our third purpose is to suggest one way forward for those who want to bring renewal to moribund churches.

We are painfully aware of the limitations of our research and this book. We are hopeful that others will replicate, correct and extend this work to include a greater variety of ethnic churches, inner-city congregations, and more churches within the mainline denominations. We also hope that as our dataset grows, our research will be further refined relative to church size and context.

As it stands, the scope of this book is limited to a snapshot of what distinguishes those who have been successful turnaround leaders in the past. It begs for a longitudinal follow-up study that shows whether the best practices and the training process we advocate help pastors become effective renewal leaders. The anecdotal evidence available to us indicates that roughly one-half of those who embark on the journey will become effective turnaround leaders.

But that's the subject of another research project.

Each year thousands of books are written, published, and distributed. Few are really significant works. Pastor Unique is, in my view, a significant book.

Helping pastors understand themselves and their role is crucial and fundamental. So is training them in the tactics and strategies of change. Furthermore, they must learn how their personalities help or hinder leading change. I believe the process described in this book is targeted more specifically than any other I know to provide this training

I am grateful to the authors for including The Birkman Method® in their work with pastors. My father, Roger Birkman, was passionate about helping people of faith gain a clearer, more accurate understanding of self and others. The authentic kind of leadership development recommended in this book will profoundly impact pastors and the people they lead. We are proud that Birkman can play a role in the important initiative represented in Pastor Unique.

Are you still searching for that killer church health conference, that “rock star pastor” to imitate, or the perfect formula that will tell you how lead your church to effective service in Jesus’ mission? Pastors who chase dreams of high powered ministry by looking for answers outside of themselves are inevitably discouraged when they learn that what works for others won’t work for them.

If that’s your story, Pastor Unique is what you’ve been looking for. Inside you will learn how to use all the tools the Head of the Church has already given you – your identity, your personality, and your life experience – to become a turnaround leader in your church.

Lavern (Bud) Brown, D.Min., has served as an intentional interim pastor in four turnaround churches. He has served in a wide variety of ministry contexts including rural communities, mid-sized cities and large suburban centers. His experience in small, medium and megachurches affords him a broad understanding of the unique challenges faced by churches of various sizes. His work has been published in academic journals, Christian magazines, books and popular websites.

Gordon E. Penfold, D.Min pastored four turnaround churches along with two intentional interims. He has trained pastors across the US and Ukraine, Russia and Armenia. His dissertation, “Characteristics of Turnaround Pastors among Evangelical Churches in the Rocky Mountain States,” led to publishing of Re:Vision—The Key to Transforming Your Church (Baker Books), co-authored with Dr. Aubrey Malphurs.

Gary Westra, D.Min., has served as lead pastor in several turnarounds. He has been in ministry over 35 years in churches under 100 to over 1000. He is a Certified Consultant in The Birkman Method, coaches churches and pastors, and works as a hospice chaplain.