A Model for Decision Making 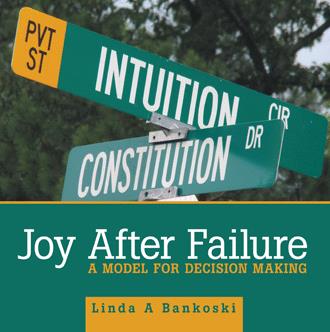 Constitutions
Groups, communities and civilizations are created from shared or common interests and intentions. Collectively instructions, rules, vision, mission and values could be called constitutions. Countries develop constitutions to define how they intend to act and govern themselves because everybody acting on their own intentions would be chaotic and ineffective.
Organizations function best when the vision, mission and values are written to be clear to all, shared and understood. Because they believe that it is important, many companies take time to create statements of their vision and mission and list their values. They may create documents and post them in the lobby of their buildings or put them on company literature and websites. Some companies never use them or refer to them after they are written. If they aren’t used, it is very clear because decisions do not reflect what has been written. If not used, they can demotivate those who view them as platitudes or empty statements. To be useful, they must be memorable, simple and visible, and visible means to be seen in actions. For the companies that do use them, they can be very powerful because they align the efforts of everyone involved in the enterprise.
There are many examples of mission and vision statements that were used with success. Here are two of my favorites. In 1962, John F. Kennedy, United States president, identified a mission to put a man on the moon by the end of the decade and return him safely to the Earth. In 1969, Apollo 11 became the first spaceflight that landed humans on the moon thus fulfilling the mission. In 1980, then Microsoft chairman and chief executive officer, Bill Gates shared his vison to have a computer on every desk and in every home, running Microsoft software. Arguably, they have come close to achieving that vision. An example of clear values can be found in the Declaration of Independence of the United States. The founders of the United States declared what they believed were values worth fighting for—safety, security, life, liberty and the pursuit of happiness.
Both missions and visons statements are statements of intentions. To be useful, however intentions must be operational. A constitution is a way to make them operational and to describe a system. A system is a set of interconnected parts forming a complex whole with a purpose.
Constitutions are used to establish how the governance of the system will work and define rights and responsibilities. To be effective they have to be both stable and flexible. Most countries have constitutions but few individuals do. I decided that I could develop my own constitution. My constitution includes my vision, mission and values. I make amendments whenever it needs to be improved or clarified or when my current constitution no longer serves my needs as a reliable guide.
Here are a couple examples of how I use my constitution.
1. Because I have decided that honesty is a value in my constitution, it is guides my decisions. The decision is an easy one if I receive too much change or if someone makes an error in my favor. I simply return the excess. It is easy to call attention to the owner or return an item if I see someone drop something that belongs to them.
2. I chose continual improvement and, to me, that means to keep moving forward. A car that is not moving cannot be turned. In humans, paralysis (not moving) is often caused by fear. Continual improvement is choosing to reject fear and choosing to move forward. It is by continually moving forward that I have learned that joy comes after failure.
The primary difficulty is changing our way of thinking. It means a shift to choose to see bad news, a failure, as an indicator to keep moving. Someone once said “If you're going through hell, keep going. That is no place to stop.” I once saw a sign on someone’s desk that said “Sometimes you win and sometimes you learn.”
It is important to me that I try to have and live with integrity; constantly remember to maintain discipline and self-control over my mind, and to maintain the clarity provided by my personal constitution. Control over one’s own thoughts is most likely a significant challenge for many of us. We can decide to increase our self-control and self-discipline and stay focused on our purpose. A guide to developing a personal constitution follows.

Our resources are the result of how we make decisions. This book is about how to make better decisions using The Choice Cycle™ and what to do next when we experience failure.

It demonstrates how to take an inventory of our resources, how to clarify our intentions and how to develop our own constitution so that we live richer lives. True leadership is making decisions intentionally.