by James Runyon & With Cynthia Runyon 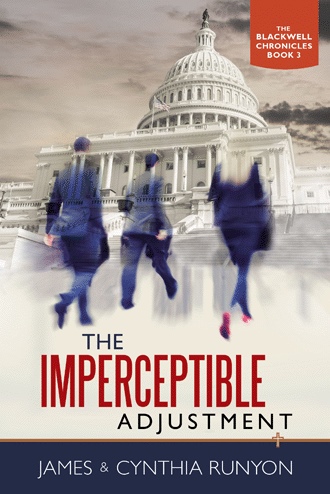 Poking Todd on the chest, Hudson whispered, “Don’t make her more nervous than she already is. I don’t want her upset.” He faked a smile.

“Hey, she asked me what I do. I’m a minister, I can’t lie,” he said shrugging his shoulders. “Uh-huh,” Hudson mumbled while laying the drawings on the bed.

Everyone looked on while Hudson got down on his knees and began tracing his finger across lines on the page. Each sheet represented a level within the building and the agent had to look at one page on top of another to trace connected lines and areas of intersection.

“Todd, over on the nightstand is a book of services, bring that over,” he said pointing. Hudson continued tracing lines, “The Greenbrier is a world renowned five diamond resort; however what most people don’t know is that in 1959, the U.S. government rented the entire facility for almost three years to build a bomb shelter under it.” Todd and Sara looked at each other. “They built this shelter large enough to house the entire Legislative branch for an extended period of time.

Todd, open that book up. There has to be a floor plan or site map.”

“Bring it over here.” Hudson kept one finger on a spot on the drawing and started scanning the floor plan diagram for a match. “There it is.”

Sara sat in a wingback chair. “What did you find?”

Standing up, Hudson straightened his back and then sat in another wingback across from her. ”We know that he’s in the shelter below us. It’s pretty obvious that he’s going to be well guarded, but only at the main entrances. We need to get to him through another way.”

“What is the other way?” Todd spoke up.

“The bomb shelter became public knowledge in the late 90’s. Changes were made around the grounds to bring the resort back to its original glory. In that time, certain doors and passageways were covered.” Hudson stood and walked back over to the drawings. “I found a ventilation shaft that should get us down to the bunker. We’ll have to do some welding, but we can get down there.”

“The Cameo Ballroom,” he said pointing to the name on the floor plan.

Picking up the television remote, Todd keyed in the channel describing the events going on at the hotel. “Hudson, it says that there is a formal dance taking place in that room in a little over an hour.”

All eyes went to the agent, “Well, it looks like we need to get ready for the ball. Todd, you need to find a server’s outfit, and I will get us some clothes,” he said pointing to Sara. “I suggest you take a shower and start primping. You need to look beautiful.”

“But I don’t have anything. No makeup or even a brush,” she complained throwing her arms in the air.

“I’ll get you what you need,” Hudson said heading for the door.

“But you don’t know what color of makeup I use or what size I wear.”

The agent smiled, “I’ll figure it out.”

The World Leader with Unlimited Power

Hayden Christopher Langley has a secret billion-dollar project that he has manipulated for his own devices. Will the outcome of this hidden venture leave him a legacy as the most powerful president or destroy the world?

Hudson Blackwell is once again sent to protect his country, but this time it has become personal. Having someone very close to him taken, can he regain what he has lost and also right the many wrongs that have occurred in his nation and the world?

The Professor of Ancient Studies

Dr. Todd Meyers knows more about ancient Israel than anyone else in academia. Yet will this knowledge be of any help when it comes to saving Hudson or restoring the world?

Being an influential voice for a powerful senator does not protect this innocent woman from being dragged into a web of deception and lies. Will she make it out safe or lose her true destiny forever?

Our History at Risk

With each successive change, more of the world is altered. Can humanity recover from the power of a mad man? Can this leader be stopped or will he complete The Imperceptible Adjustment and change our nation forever.

Dr. James Runyon pastors a church and teaches at several universities. He enjoys flying his airplane and riding his Indian motorcycle. Cynthia is a marketing strategist who writes to inspire Christian women with the truths of God. They live in New Mexico with their four children. Visit them at jamesandcindirunyon.com.