Kindi and the Preacher

A Story About Why Things Happen 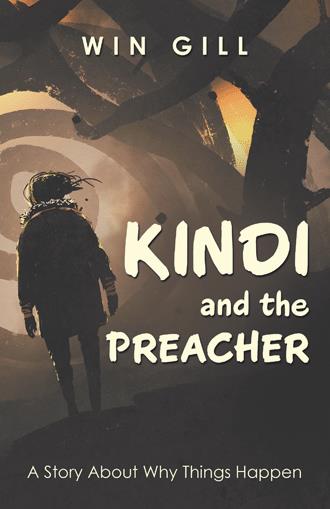 Kindi decided to press her way into the church. As she went forward, leading Mark by the hand, she felt Mark’s hand pull her back.
“Why are we going in?” he asked with an underline of reluctance.
“I want to see if the preacher is here,” she answered. “He was supposed to speak and didn’t.”
“Don’t you think he’s busy talking to the families?” Mark replied.
Somehow Kindi just kept thinking something was wrong. She simply wasn’t thinking about the families that were grieving, only what happened to the preacher. The local television cameras and reporters, hundreds of people inside and outside the building were no distraction to her befuddled worry. She seemed fixated on the dark worry that something bad happened.
The many things the preacher told her in their conferences started to race through her mind. She thought about his encouraging words. This day was like that other winter day about three weeks ago. It was a cold misty rain. The preacher reminded her, “Kindi, it’s warm in here.” She remembered how the pastor agreed with her about the world being so messed up. She thought of his being so patient with her. There was that time in their conference when she kept interrupting, but the pastor kept patiently listening. And of course, she mostly recalled the feeling of feeling safe with him.
Having pressed her way into the building, Kindi noticed the welling tears in her eyes. Her memories of the preacher along with the grieving atmosphere in the sanctuary forced her worry to a sullen panic. Her quick scan of the crowd revealed the preacher nowhere. Her now empty hand wondered what happened to Mark.
She turned around and found Mark tucked behind several people at the sanctuary entrance. Their eyes met around the heads and shoulders of the crowd. She read Mark’s lips, “I’ll wait outside.” He motioned and turned around toward the exit.
Okay, she thought. He’ll just wait outside. I don’t understand why he doesn’t understand something’s wrong – can’t he see that I need him? She looked back toward the front of the auditorium. Chaplain Rae was talking with a man in a white uniform. She thought that must be the Chaplain who gave the memorial sermon.
She continued to press her way forward, saying, “Excuse me.” “I’m sorry.” “Pardon me, please.” She turned left and right, trying to negotiate a gloomy crowd in a sanctuary of sadness. She went forward as if her worry surpassed their grief. Somehow, the pain of all the loss in that room escaped Kindi’s intensifying fears of the preacher’s absence.
She looked up from the last intersection of quiet mourners and noticed Chaplain Rae exiting through a back door. Kindi’s impulsive urge forced her voice into the bottom of her throat and she thought to yell out, “Chaplain Rae.”
Just as she breathed in deeply for the volume she would need, she stopped and realized how embarrassing that would be. So, Kindi finally arrived in the line of the many people talking to the chaplain in the white uniform. Still listening to the quiet whispering voices of the grieving crowd, she heard no mention of the preacher. She resolved that the chaplain in the white uniform will know something. She finally arrived at the chaplain’s hand extended in a kind welcome.
“Excuse me, sir,” Kindi said hastily. She looked at all the colorful markers on one side of his uniform and found his name on a pin on the other side. “Mr. Baker.”
“Yes,” Rear Admiral John T. Baker replied. He bowed his head with a welcoming smile. “How can I help you?”
“Well,” she stammered, “I was wondering about the preacher, you know the pastor here. I thought he was supposed to speak, and I was wandering if you knew where he was?”
Chaplain Baker knew what had happened. But he didn’t feel at all comfortable sharing with someone he did not know. So, he wisely and kindly answered, “Well, uh, What’s your name?”
“Kindi,” she answered.
“Kindi,” he replied. “Are you related? His daughter?”
Kindi had a warm thought just then, What if I were the preacher’s daughter? In that moment, she realized she had an affection for the preacher that she had never really felt. Maybe her feelings were what she might feel for a dad that she really loved. Maybe this new impulsive worry for this older man, the preacher, who had been so kind and patient – maybe this new feeling was a love for a father that she never really had. In the sincerity of this new holy feeling, she answered honestly, “No, I’m not his daughter, but I go to church here. And, he’s my preacher.” She stood up straight to declare it with pride.
“I am really sorry,” the chaplain said. “I am just not at liberty to share at this time. I’m confident that the church staff will be sending out a message soon.”
Kindi shook her head and motioned breathlessly with her lips, “Oh no, what's happened?”

When young Kindi seeks help from the Preacher, the unanswered questions get darker with more unexpected crises. Each person plays a role they don’t even understand. Each one interconnected with the other, never fully knowing their own impact. Abuse, scandal, and death create a web of confusion where nothing seems to make sense. Local tragedy causes one kind of pain. Town talk causes another. The people of Greverton discover how even the most insignificant details matter in the larger plan of cosmic justice. When they demand answers to life’s hard and thorny questions they uncover more than they ever really wanted to know about why things happen.

Windell "Win" Gill is a pastor, educator, chaplain, author, consultant, and coach. He has more than three decades of service as a pastor and educator. His academic background in theology and his research in emotional labor marks the basis for understanding the internal conflict of suffering as it relates to the God question. He directs Daring Ventures Initiative, a non-profit 501(c)(3) that provides emotional skills training and recovery support for adolescents, individuals, couples, families, churches, schools, and municipalities. Win holds a Doctorate in Education, Master of Science in Education, and a Master of Divinity with Biblical Languages. Contact him at windell@daringventures.com.