The Seven Pillars of Christian Manhood

Turning your Son into a Solid Man of God

by Daniel A. Biddle & Mark Johnston 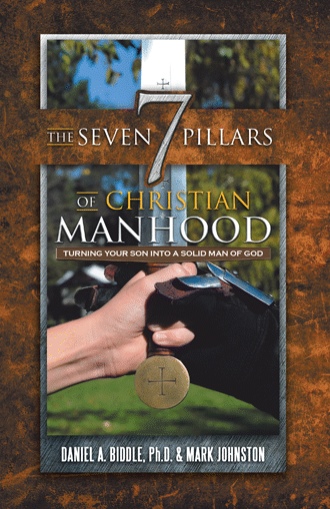 This book provides a Biblically-based, seven-month program to turn your son into a solid man of God based on the Seven Pillars of Manhood:

Churches are filled with well-meaning youth pastors and programs that promote Christian values, doctrine, and culture to today’s youth. But it is rare to find a program that includes a comprehensive set of “pillars” that are specifically designed to bring a teenage boy into Christian Manhood. By providing an intentional framework for Christian Manhood that can be worked through by a father/guardian and son over seven months, this book is designed to provide such a program.

Dr. Daniel A. Biddle is president of Genesis Apologetics, Inc., a non-profit organization dedicated to equipping youth pastors, parents, and students with Biblical answers for evolutionary teaching in public schools. Daniel also heads up www.knightsofchrist.com, a ministry that equips Christian young men in the pursuit of Godly character and virtues. Daniel’s professional background is in the areas of Human Resource consulting.

Mark Johnston is the president of NextGen Arising, a 501C(3) youth ministry focused on the development of strong Christian students. Mark has over 25 years in youth ministry in California, ranging from Christian schools to mega-churches.