The Legal Basis for a Moral Constitution

A Guide for Christians to Understand America's Constitutional Crisis 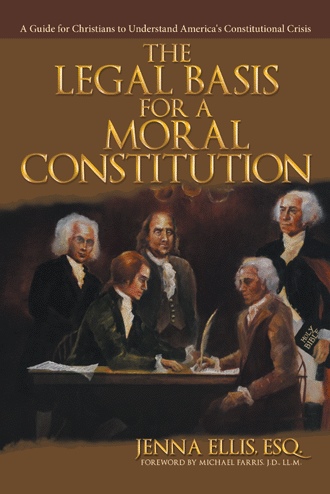 I started writing this book well before the Obergefell v. Hodges same-sex marriage decision was handed down in June 2015. That Supreme Court opinion simply further necessitated a comprehensive, logical, and legal argument for a moral basis to Constitutional interpretation. In the aftermath of that decision, the States and the American people in general were left in a Constitutional crisis greater than we have ever faced since the original Constitutional Convention in 1787.

As Americans, we are adrift in a huge, murky melting pot of so many different ideas, cultures, faiths, and worldviews that we have largely embraced the mantra that in order to safely coexist, no one can or should assert any moral conclusions. That, the secularists argue, would be imposing my views on you, which absolutely cannot be tolerated in the name of absolute tolerance. Liberty, they argue, can only be asserted when it is not offensive to anyone else. Free speech and possessing sincerely held beliefs and values have become “bigotry.”

With the rise of modern social media, expert opinion has become vastly watered down … And of course, any person’s opinion must be tolerated and accepted, so long as the opinion itself is tolerant and acceptable.

The 24/7 cycle of noise and chattering opinion has so muddied the waters that our society is both harshly critical of any “hating” or “bigoted” opinion that differs from one’s own and also firmly demanding complete tolerance for everyone’s opinion—simultaneously.

We are in a cultural crisis also.

Yet within this pool of raging inconsistencies, the general public still understands why objective, authoritative justification matters—not just having support for an opinion from friends and family or the latest poll showing the majority opinion currently agrees with one’s own stance. We still want authoritative validation.

The so-called “same-sex marriage” decision, Obergefell, was a key example of this social paradox. Most of the LGBT response and celebration was not about legalization, government benefits, or the same-sex community’s satisfaction in a slight majority on the Court currently favoring their cause, but rather it focused on the idea that their same-sex couplings (and by theoretical extension, polyamorous and other “unions”) were finally validated by the highest government authority and therefore considered just as valuable as heterosexual unions. A government license equals government value and validation.

Even the final paragraph of the opinion, written by Justice Kennedy and the portion most widely reposted on social media, discussed this very moral value judgment:

“They ask for equal dignity in the eyes of the law.”

In other words, the LGBT community asked for a value judgment and moral validation from the Supreme Court, via (supposedly) the U.S. Constitution.

This is a fascinating insight into the American psyche and the current mantra’s contradiction. Jean-Paul Sartre, secular existentialist philosopher, wrote, “[Man] was free, free in every way, free to behave like a fool or a machine, free to accept, free to refuse, free to equivocate; to marry, to give up the game, to drag this death weight about with him for years to come. He could do what he liked, no one had the right to advise him, there would be for him no Good or Evil unless he thought them into being.”

But if we are truly free, independent beings that have broken free from the “bonds” of social custom or of anyone else’s judgment and live only within our own reality, as secularists like Sartre assert, why should we care about the law’s value judgment or morality at all?

We care because we are still human beings with a conscience, and as much as we try to intellectually liberate ourselves from any bonds of nature or social or government-imposed “labels” on gender, race, sexual orientation, traditional family composition, marriage, morality, etc., we still know objective morality and value exists outside of ourselves. And we still crave its validation.

As much as we may preach tolerance and equality of all opinions, every person understands the difference between simply holding an opinion ourselves and having that opinion legitimized and validated through the law or an actual authority. Winning a civil lawsuit or securing a criminal trial acquittal turns a person’s claim of damages or innocence into a legitimate legal result.

The law as a whole is an expression of what a society values and its morality. Our justice system shows that we value due process and the right to a fair trial. We value protecting life and liberty. The law is our codified morality, expressed through our formal authorization on everything from what acts we criminally punish to what we allow science to test in petri dishes and on animals.

The law is, and always has been, used to impose a specific worldview on culture. We cannot escape the fact that law is therefore always inherently moral.

But Americans still understand value and how our law imposes that morality on the whole. We still place a great deal of weight to our Constitutional authority and what our laws choose to say about us and our national moral compass. But if we actually cannot divorce law from moral judgments, whose morality is really controlling and whose morality is legitimate authority?

This book offers insight into the legal reasons our nation must be compelled to return to universally objective moral judgments from a higher source than the collective government. Morality is not the subjective, changing whim of the majority, or more specifically, the majority of nine Supreme Court Justices. It will unpack a comprehensive, logical, and legal argument for the only legitimate basis of objective morality within the U.S. Constitution, through its history and foundations, and then provide a proposed solution: the Article V Convention of States project.

America is in the midst of a cultural and constitutional law crisis that began more than sixty years ago and was further exacerbated by the 2015 Supreme Court same-sex marriage decision. How did we become a culture that lacks objective morality and embraces secular ideas, hinging on the majority whim of nine justices? How do we get back to being a biblically moral, upright society and recognizing the U.S. Constitution as supreme law of the land?

In The Legal Basis for a Moral Constitution, Jenna Ellis makes a compelling case for the true roots of America’s Founding Documents in objective morality and how our system of government is founded upon the Christian worldview and God’s unchanging law, not a secular humanist worldview. She provides a unique perspective of the Founding Fathers as lawyers and how they understood the legitimate authority of biblical truth and appealed directly to God’s law for the foundation of America.

Weaving together the legal history and underpinning worldview shifts in American culture, Ellis advocates how Christians must change the basic reasoning of our appeal and effectively engage our culture. Finally, she proposes the solution to reclaim objective, biblical morality in law that the Founders themselves provided for through Article V of the U.S. Constitution.

This book is for every Christian who seeks to understand the times and our constitutional and cultural crisis.

Jenna Ellis is an attorney, professor, and legal analyst from Denver, Colorado. She practices law throughout Colorado and regularly speaks at conferences and on radio programs, discussing a variety of constitutional law, religious freedom, and current-events issues. Jenna received her J.D. from the University of Richmond School of Law.