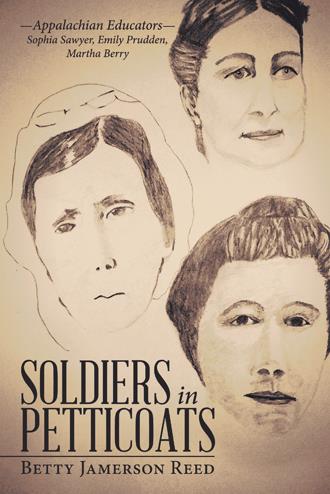 History chronicles the achievements of Sophia Sawyer, Emily Prudden, and Martha Berry; in the nineteenth and early twentieth century, they pursued teaching as an avenue of service. Sawyer directed her efforts toward advancing the education of the Cherokees, Prudden focused on educationally deprived black and white students, and Berry dedicated herself to teaching poor mountain whites. Each woman routinely made executive decisions, organized fund-raising events, sought outside support, founded schools, bought land and supplies, erected buildings, furnished those buildings, and hired and fired employees. They often faced efforts to put them “in their place.” On occasion, male supervisors challenged any tendency to rank a woman’s place of service as equal to a man’s. However, competition with or victory over men was not important in their lives as missionary teachers. Their energy converged on sharing their Christian faith and on their pupils’ accomplishments.

· In her role as a missionary teacher, Sophia Sawyer, with her keen sense of duty, emerged as a strong educator in diverse roles as manager, administrator, innovator, and transformer.

· Emily Prudden provided learning opportunities through perseverance. She traveled throughout the mountains and foothills of western North Carolina and nearby South Carolina to identify deprived communities in need of schools. She exhibited vision, devotion, and determination.

· Martha Berry improved her schools through the power of her lifestyle. Her image as a woman of prominence gained her an influence in accomplished circles and expanded her prospects to acquire support for creating schools to serve poverty-stricken mountain youth.

Sawyer, Prudden, and Berry displayed a strong religious faith and advocated education as a key to strengthening a child’s confidence in God and in the Bible. Such conviction spurred these Appalachian educators to exploit learning as an empowering tool for underprivileged children. Drawing strength from her faith, Sawyer faced every obstacle with courage and fortitude. In today’s vernacular, one might say she possessed guts, grit, and swag. Emily Prudden found a vital avenue of service in later adulthood. Her life serves as an example that physically challenged individuals can lead lives of service and thrive in new surroundings. Martha Berry lived a life of noble sacrifice and enriched the lives of countless mountain children. Criticized and demeaned, she stood tall in the face of adversity and won victory after victory for her schools and her students.

Earnestly seeking to help the deprived, Sophia Sawyer, Emily Prudden, and Martha Berry confronted crisis after crisis; they fought fires, discrimination, bigotry, and poverty, as well as ignorance and even dirt. All three remained confident that God would provide the way, the funds, the stamina, and the direction. A generous spirit also prodded each woman to invest her personal funds in school business. All three women accepted the values of piety, purity, submissiveness, and domesticity. Neither woman assumed the prescribed role of homemaker; instead, they became role models for classrooms of children.

On one occasion two militiamen showed up at the school door and threatened to arrest the teacher if she continued teaching black children to read. Another instructor dealt with murder and mayhem, violence, loss of life, and racial hostility. And a third was shunned by her neighbors because she associated with poor mountaineers and “begged” to keep her school open. Their victories against overwhelming obstacles on behalf of struggling youth in the Southern Appalachian region, as well as in Oklahoma and Arkansas, led each into a deeper Christian life. With vision, audacity, and resolution these teachers enabled students to succeed.

Their accomplishments as educators and as Christians provide inspiration for today’s readers. Sawyer, Prudden, and Berry were viewed in their culture as weak. However, they battled ignorance, bias, superstition, and even dirt, as they effectively changed the lives of thousands of children and adults.

A retired educator with an interest in Christian missions, Betty Jamerson Reed has rigorously researched the lives of three school founders. Reed spotlights Sophia Sawyer, a committed instructor of Cherokees; Emily Prudden, a master builder of fifteen schools; and Martha Berry, an untrained educator who turned ignorant boys and girls into active learners. The author, a graduate of Bryan College, reveals details of their battle to overcome barriers confronting the youth of Appalachia. Reed’s previous books identified the accomplishments of black and white educators in their crusade to overcome the limitations of a segregated education: The Brevard Rosenwald School: Black Education and Community Building in a Southern Appalachian Town, 1920-1966 (McFarland, 2004) and School Segregation in Western North Carolina: A History, 1860s-1970s (McFarland, 2011).