The Lion and the Lamb

by Charles Causey & With Frits Nieuwstraten 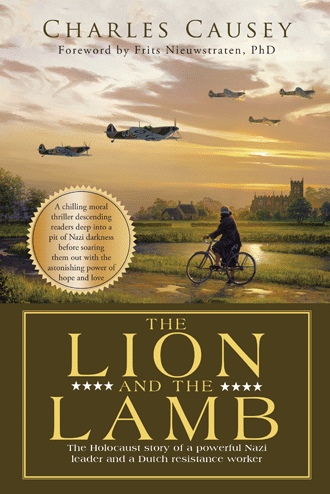 Fourteen-year-old Martin Adolf Bormann was home from his Bavarian boarding school for the Christmas holiday. He and his kid sister, Eike, loved spending time on the Obersalzberg, sledding and playing games in the snow with their friends. Martin often ran errands for his father, or for his godfather, Adolf Hitler. Martin was quick and helpful; he dashed around the mountain to different meetings near Hitler's headquarters with films, maps, and war photographs.

Martin and Eike were invited one day to visit the house of a neighbor, Hedwig Potthast, for tea. They did not know her well but she seemed nice, plus she served chocolate cake that was lip-smacking. Martin wondered about this interesting woman. He knew Fräulein Potthast was in a secret relationship with the SS leader, Heinrich Himmler, who worked alongside his father to help Adolf Hitler win the war. He did not know what she did during the day or why she lived alone.

The visit was going well, but after the trio finished their treats, Fräulein Potthast stood and told the children she had something she wanted to show them in the attic if they were interested: a special trove of secret treasures.

Martin and his younger sister looked at each other, silently consulting, then nodded excitedly. The children stood and followed their hostess up the back stairs to the attic. "Now, children," said Fräulein Potthast sternly, "you must promise me you will never tell anyone about the things you are about to see. I am showing you because I think you will find them as fascinating as I do. It is a rare assortment of treasures that my friend, Herr Himmler, collected and stores here."

"We promise," Martin and Eike said together.

"Okay, I trust you. Look over here." Fräulein Potthast pointed to a table and chairs and explained them in a scientific manner. The children looked at the furniture with curiosity.

"The furniture up here is made entirely out of human body parts. You see this chair, it is made of human bones. See the arms? They are human arms. See the legs? Those are actual legs on human feet. Look at the seat; it is made of a human pelvis bone. You can sit on it if you like, it's sturdy."

Martin grabbed his sister's hand, "Don't worry, Eike. You don't have to." He himself was also full of fear, and desired to leave the attic.

Fräulein Potthast was not disheartened, "Take a look at this." She picked up a book from a pile and handed it to Martin.

Martin reached for the book, recognizing it as Adolf Hitler's treatise Mein Kampf. Martin had seen it many times before. This one had a cover that felt leathery. "This cover is made from a very unique material," said Fräulein Potthast smiling while Martin held it. "The prisoners at Dachau made these books with covers out of human skin. They used the skin from the center of the back. Isn't that interesting?"

So did Martin. He swiftly handed the book back to Fräulein Potthast, and hastily said goodbye without looking at her. He grabbed Eike's hand and maneuvered toward the back stairway.

"Don't you want to see the other things?" asked Fräulein Potthast with disappointment. The children did not acknowledge the question as they were already halfway down the stairs. They could not leave fast enough. Eike pushed her brother down the narrow stairs as Martin's feet tried to find each step to avoid tripping. They left the house and raced all the way home into the arms of their mother.

Though they never returned to the house of Fräulein Potthast, the memory haunted them. As much as they tried to forget about it, they were stained with the images they witnessed in the attic. 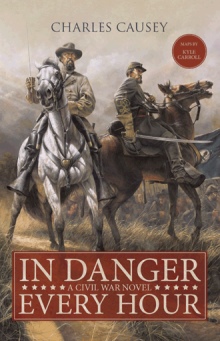 In Danger Every Hour
Charles Causey
$34.95

A true Holocaust story, The Lion and the Lamb begins with a mysterious plane crash which catapults architect Albert Speer into Adolf Hitler’s inner circle. When the two Nazi leaders become close confidantes, Speer is forced into constant competition with Heinrich Himmler, Joseph Goebbels and the unstable Hermann Göring. When a botched assassination attempt reveals Albert Speer’s name in an SS investigation, Speer is ostracized by the staff and falls under Hitler’s suspicion for disloyalty. As the Russian army advances on Berlin, Speer is poisoned, lied about, and forced to fight for his standing with the most evil and calculating men in Europe. Will Speer survive his last-minute trip to the Führer’s bunker just hours before the end?

The Lion and the Lamb also tells the story of a Dutch Resistance worker named Corrie ten Boom who leads her entire family into a desperate struggle against the Nazi’s anti-Jewish policies in Holland. Like Speer, Corrie is thrust into a psychological torture chamber suffering daily anguish from abusive guards. She is forced to travel from prison to prison in Nazi death trains after her underground operation is raided by the secret police. A novel of innocence, betrayal and tragedy, The Lion and the Lamb is an absorbing tale of how war-torn people cling to the power of faith, hope and love.

Colonel Charles Causey serves soldiers and their families as a U.S. Army chaplain stationed in Washington, D.C. He holds a doctorate and master’s degrees from Trinity in Deerfield, IL and the United States Army War College in Carlisle, PA. He is an author for Abingdon Press and NavPress/Tyndale House and has written several literary works including the American Civil War novel In Danger Every Hour and a unique guide for married couples Unbreakable co-written with Tony Miltenberger. Charles and his wife Lauri live in northern Virginia and, together with their four children, have partnered with the Tanzanian mission Hope of the Nations. Learn more about Charles Causey’s work at causeybooks.com.