The Dragon Stalks the Butterfly

The Intriguing Crises within the NT Christian Churches of Judea revealed in the pages of Galatians, James, Jude and Hebrews 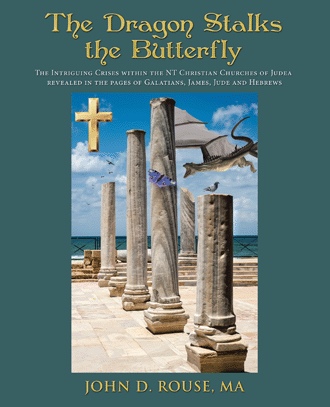 “False Notions of Christianity”: verses 26-27: Translation from the Greek: 1: 26: “If anyone considers (himself) to be religious while not controlling his tongue, (this person is) deceiving his heart, (and) the religion of this man (is) futile.” Exegetical Analysis and Commentary with Practical Applications: “If anyone considers (himself) to be religious....” This statement proposed a possible hypothetical situation. ‘Just suppose that a person thinks he (or she) is religious.’ James was suggesting that a person considered himself to religious, perhaps not unlike a strict Pharisee. ‘Considers’ was δοκεῖ, from δοκέω, ‘to consider as probable, think, believe, suppose, consider,’ (BDAG). ‘Religious’ was θρησκός, ‘religious,’ (BDAG). This term was only used here in the NT (a hapax legomena), but was derived from the noun, θρησκεία (only used twice in the NT, once in an evil sense by Paul, Colossians 2:18, ‘the worship of angels,’ and once here in the last part of this verse, which referred to performing sacrifices and cultic rites: ‘going through the outward motions of religion: showing piety).’ “…while not controlling his tongue….” The condition that negated the validity of his religion was ‘not controlling his tongue,’ μὴ χαλιναγωγῶν, a present progressive participle meaning to ‘bridle, hold in check,’ (BDAG), a term relating to a bridle of a horse which the rider used to control the horse’s movements. This word was unique to James (used here and also in 3:2). This person or group of people were either real or hypothetical (they were real heretical teachers according to Davids, p. 101), and they had no control over their tongues; therefore, they were helpless in moving in the proper direction, resulting in a chaotic situation. If James was referring to a real group of heretical teachers, they may had been speaking lies about Christian doctrine or stirring up conflicts. “… (this person is) deceiving his heart….” ‘Deceives’ was ἀπατῶν from ἀπατάω, meaning to ‘deceive, mislead,’ (BDAG). This person continually (present progressive tense) misled his or her own heart and became spiritually derailed. “… (And) the religion of this man (is) futile.” Therefore, the person’s ‘religion’ was futile, ‘μάταιος, ‘pertaining of being of no use, idle, empty, fruitless, useless, powerless, lacking truth,’ (BDAG). This kind of religion was false and not based on the truth of the Scripture. It was an empty show without substance. See also a more complete study of the ‘tongue’ in James chapter 3:5 to 8. Translation from the Greek: 1 27: “A clean and unstained religion in the presence of God is this, to visit orphans and widows in their trouble, to keep himself unspotted from the world.” Exegetical Analysis and Commentary with Practical Applications: “A clean and unstained religion in the presence of God is….” Here James defined true ‘religion,’ or ‘worship,’ θρησκεία. “…is this, to visit orphans and widows in their trouble….” ‘True religion’ in the presence of God was not just performing the rituals of religion; it was performing good deeds to those in need with a true sense of giving comfort to those were suffering. This was the outcome of true faith, something Paul would have agreed with. “…to keep himself unspotted from the world.” The other requirement of true religion before God was purity: ‘to keep himself unspotted’ a descriptive phrase to avoid. ‘Keep himself unspotted’ was ‘τηρεῖν ἑαυτὸν ἄσπιλον,’ where the verb τηρεῖν was a present progressive tense infinitive (continually) emphasizing ‘continually keeping’ that was required for this part of the definition. Also the direct object, ἄσπιλον, ‘unspotted,’ was in the emphatic position, occurring first in the phrase, stressing its importance. This person who was celebrating this ‘false religion’ had no concerns about ‘contamination of the evil world,’ a major concern of God for all believers. The influence of the world contaminated the person’s being and thwarted the purity that God demanded. ‘Unspotted,’ ἄσπιλον, ‘pertaining to being of untainted character, pure, without fault, an inner characteristic,’ a word also used by Paul (I Tim. 6:14), Peter (2 Peter 3:14), and Jude (25). James was well within the orthodoxy of first century Christianity with these comments. Chapter 2: The theme: Riches and Charity: Translation from the Greek: 2:1: “My brothers, do not express by favoritism the faith of our Lord Jesus Christ who (is) from glory.” Exegetical Analysis and Commentary with Practical Applications: “…My brothers, do not express by favoritism….” Literally, ‘Do not have favoritism’ regarding the faith….” ‘Favoritism’ was προσωπολημψίαις, ‘partiality,’ (BDAG). This noun was also used three times by Paul (Romans 2:11; Ephesians 6:9; and Colossians 3:25), revealing agreement with Paul’s emphasis on a faith that produces good works. This term was in stark contrast with Graeco-Roman judges of the time who considered a person’s wealth while considering his or her guilt or innocence. If the defendant was wealthy, then the judge would rule ‘according the face’ of the person, not according to the facts, that is, according to the payoff that would have been expected by the judge. Christians were held to a far higher standard than showing that sort of ‘partiality.’ The term for ‘favoritism' implied that the word was used in judicial situations by the Palestinian churches (Davids, p. 105). “…do not express by favoritism the faith of our Lord Jesus Christ who (is) from glory.” The point was that James, the half-brother of Jesus, made a profound statement of Christology here. He stated clearly that Jesus was Lord, and that He came from ‘glory.’ In other words, Jesus did not come, like all other people, from Adam. He was from the God of glory. According to Paul, Christ shared God the Father’s glory which was seen in the face of Christ Himself (II Cor. 4:6). Again, Paul shared the same theology and Christology with James: both held that Jesus was God and Lord.

This book was the culmination of several years spent teaching New Testament (NT) Greek on the epistles of Galatians, James, Jude, and Hebrews. It was discovered early in Pauline studies that Paul addressed the encroachment of ‘Judaizers’ as they added two tenets of Judaism to the requirements of salvation: circumcision and following the Mosaic law. Paul’s letter was the earliest of the four written around 48 AD. James also wrote to the same group in 52 AD, learning about bursts of rage and conduct issues unbecoming to Christians. Jude, James’s brother, also wrote a short letter to them (64 AD), concentrating on even more serious issues in their love-feasts. The last letter to the Hebrews (fall, 68 AD) also addressed church tendencies of lifting Moses above Christ, angel worship, and immaturity, warning Judean Christians of apostasy by treating Christianity as a mere religion, as the Jews had done over many centuries before with Judaism.

The background of this book—and a commentary also written by Mr. Rouse entitled Paul, the Passionate Scholar—was developed over a fifty-year period of research, teaching, and exploring the archeological remains of Rome and Greece. The research had begun after graduating from Bob Jones University in 1964, where Mr. Rouse majored in history and Greek with a minor in English. The extensive research concentrated on coursework at UCLA in preparation for two major visits to Italy and Greece.

In the mid 1980s he was admitted as a visiting scholar at the British Museum, where he conducted extensive research on Roman artifacts and took hundreds of photographs in the backrooms of the Museum.

In the last ten years, Mr. Rouse has designed and taught a new course on New Testament Greek, designed for lay students who are interested in the depth of the Greek meanings.