Everyday Language from the Bible 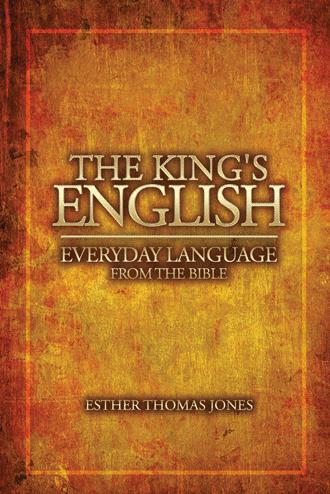 Despite the fact that the 1611 King James Version of the Bible has been revised several times, most of the expressions in this book have been in the English language for more than four hundred years. Expressions from the Geneva Bible, Tyndale Bible, and the Authorized King James Version of the Bible (generally referred to as the KJV) are still very much in use by both speakers and writers of English. The year 2011 marked the four hundredth anniversary of the first printing of the KJV, but four hundred years have not diminished its popularity. In this book, there are over 1,100 sayings, truisms, and quotations as well as inferences drawn from the Bible which we use in our everyday communication. While this list may not be exhaustive, it comprises the expressions I encountered during several personal journeys through the awe-inspiring yet convicting, timeless, and beautiful pages of the King James Version of the Bible.

As a modern-day Griot, or storyteller, my purposes for writing this book are to provide everyday speakers of English as well as language lovers, students of the Bible, and those new to the language with a pleasurable and insightful journey into our rich linguistic past which will: (1) create an awareness that the KJV has influenced our language and literature as well as our laws, our social behavior, and religion; (2) show the KJV's influence on English as well as aid speakers new to the language by defining and/or explaining a selected list of everyday expressions and well-worn quotations currently in use; and (3) give the complete verse of the Bible so that the reader can readily see that the meaning of the original usage remains although the expression may have been rendered into modern English.

This collection had its inception over twenty years ago when I began my third attempt at reading the entire KJV. As I delved deeper into my reading, I was struck by the abundance of present-day expressions, some of which I already knew were biblical. However, it surprised me to learn that many others which I had heard all my life could also be found in the KJV. About the time I reached the book of Job, I began recording the phrases that caught my attention.

After my first reading, I began again. This time I specifically searched for sayings, figures of speech, and truisms as well as literary allusions I knew to be still in general use. I was astounded to discover such expressions as all things to all men, play the fool, in one’s right mind, break one’s word, make a name for oneself,and living off the fat of the land.

This book is an alphabetically arranged list of everyday biblical expressions. The entry phrases (or sentences) are printed in boldface letters followed by an explanation or definition along with the complete biblical citation which shows the entry phrase in italics. Spelling, capitalization, punctuation, and word spacing are reprinted as they appear in the KJV. Historical, literary, and/or cultural asides have sometimes been added to complement the definitions and explanations.

Here is an example:

A man’s home is his castle – The husband is king and ruler of his household.

When Queen Vashti disobeys the summons of her husband, King Ahasuerus, his court advises him to publish a decree admonishing all wives to give honor to their husbands, both to the great and to the small: “For he sent letters into all the king’s provinces, into every province according to the writing thereof, and to every people after their language, that every man should bear rule in his own house, and that it should be published according to the language of every people” (Esther 1:22).

During my research, inferences also came to my attention. Some of the ones I have drawn may appear a little far-fetched and even irreverent. I am certain too that some of them have been assigned other meanings and other sources of origin by linguistic scholars and specialists. Yet, I found a number of striking parallels between present-day idioms and biblical situations. For that reason, I could not restrain myself from saying the people of Noah’s day missed the boat, and the children of Israel covered the same ground.

Finally, a book about the English language that everyone can understand and enjoy. Get ready for a deeper understanding of the influence of the Bible on historical and modern-day life. Learn how since our country was founded, Scripture has impacted the language of poets, playwrights, musicians, philosophers, statesmen, you, and me.

• Over 1,100 expressions, figures of speech, and quotations that make up our everyday language
• Biblical origin and citations along with present-day meanings
• Definitions and explanations of biblical and literary references

Esther, “Queen Esther” to her family, has a rich love affair with words that spans eight decades. At five, she sought solitude under the kitchen table with her favorite book. At fourteen, she earned money by listening to the jukebox in her uncle’s café and writing out the lyrics for a local band. In school, classmates always checked their answers with hers before turning in their papers.

Upon graduation, she completed a Bachelors in English and Master’s in Library Science. Her 34-year career as a public-school Librarian ensured she was always surrounded by thousands of books. After retirement, she pursued her passion for writing which blossomed after she was awarded the Frances Shaw Fellowship for Women Writers at Lake Forest Artist’s Colony near Chicago. Her short stories led to literary awards and found a receptive audience with both editors and readers of major Texas magazines and newspapers.

A modern-day Griot or storyteller, this book is Esther's life’s dream, her passion fulfilled. It brings her love for God and the written word of the Bible to life. Like her namesake, Esther steps out confidently and boldly while calling our nation to turn their minds, hearts, and spirits to God and His Word. She was born for such a time as this.