I Have a Nick Story

A Journal Following the Death of My Son 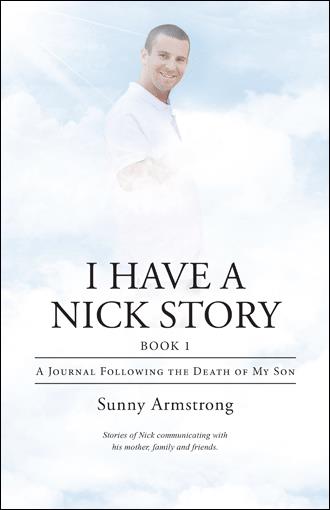 I had cancelled three dentist appointments. I knew the dentist would ask why I wasn’t my happy self, but I just wasn’t ready to answer. A few weeks ago I had received in the mail an advertisement with a bunch of stickers. I left them on the front seat to share with the boys eventually. I got in the car this morning to babysit at Natalia’s. There on my arm rest of my car were four small stickers all in a row like a chain. The first one was white, second was red, the third and fourth were also white. The red sticker said, “Dentist.” I turned on the radio and Michael Jackson’s song was playing, “You are Not Alone.” Again words sending me comfort.

Eating dinner. Call from Natalia. I called back. She hadn’t called. Nick.

Tonight went with Natalia and boys to a play place with rooms of different things to do like the ball room, the climbing room etc. Natalia told me that Henry had gotten into the CD TV drawer earlier and pulled out a flyer of Mt. Rushmore. Nick loved Mt. Rushmore. None of us knew how the flyer got in the drawer. Funny, just last week, while Sofia and I were walking the pier, I mentioned Mt. Rushmore to her and we decided that would be a good road trip. Maybe Nick was listening.

After the play place, Natalia and I took the boys to a restaurant. The boys were restless awaiting the bill, so we walked around. In the back room were lots of pictures on the wall. Henry said, “Look Nanny, There’s a picture of Mt. Rushmore. “I got in the car and turned on the radio-Michael Jackson’ song was playing, “You are Not Alone.” Nice. Thanks Nick. You are with us and so are your comforting words. 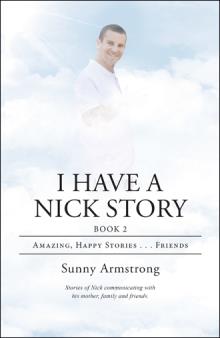 Upon the sudden death of her son, Nick, at age twenty-six, Sunny used her counseling experience to handle the grief by writing in a journal. Numerous unexplainable incidents immediately occurred following Nick’s death, not only to Sunny but to family members and friends. “I have a Nick story” became the mantra for those incidents when shared with one another. God has allowed Nick to communicate through various astonishing means. Sunny believes she should not be the only one receiving such examples of God’s goodness. She decided to share Nick’s stories of his love for her, for his family, and for his friends with interested readers.

Sunny Armstrong was born and raised in Worcester, Massachusetts, along with her two sisters. She has lived in California most of her life. Sunny is a former elementary teacher, middle school teacher, counselor, and administrator. Sunny has continued teaching at the community college level. She enjoys vacationing with family and visiting her numerous nieces and nephews, her immediate children, extended family, and precious grandchildren. Along with weekly Pilates, yoga, and biking, Sunny also is an avid reader.