Leave No Way Out!

A Guide to Getting and Staying Married 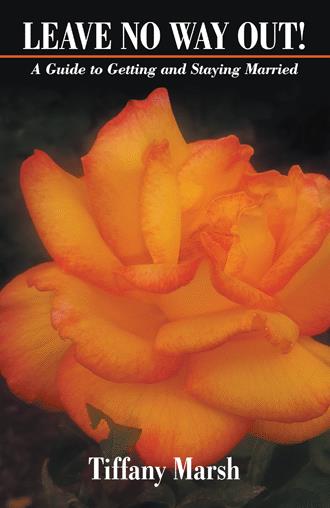 Marriage is an eternal commitment between you, your spouse, and God. Getting married is a very life changing decision, sadly it is a choice not taken seriously in America. Getting married is easy; staying married is where faith comes in. “The Difficult we do immediately, the impossible takes a little longer. “unknown author”

Marriage is the sanctity, an action between two people who love each other. According to the Bible Marriage is the closest idea of a relationship God desires to have with his bride the Church. If Christ is the groom and the believer is His Bride we can never fail. However, when we attempt to do Marriage without God through Christ this can become and unpleasant and trying time in your life. Marriage without, Christ as the head is like trying to float a boat on the Ocean with a whole in the bottom. It will float for awhile, but eventually it will sink.

Christians are getting married and divorced for the same reason as non-believers. Our approach to marriage is the same. We look to ourselves and our own reasoning to both rectify and heal the troubles that plague our marriages. Think about it, just as no finger prints are the same neither is any marriage. All Marriages are unique and should be. Make your marriage your own. You must be proud of the uniqueness of your marriage. When husbands and wives attempt to mirror their marriage after an idea of what others believe their marriage should look like is when their marriage has already begun to fail. The purpose of this book is to help married or engaged couples understand reasons to get and stay married. There are many reasons to get married but only one reason the Bible allows for a divorce. When considering marriage you must Leave No Way Out!

Leave No Way Out is meant to be used as a guide to help married and non-married couples through some of life’s most difficult decisions when considering if they should get or stay married. The book is meant to aide those who are wrestling through the dark seasons in marriage. When you are dealing with your spouse’s issues and the different ordeals that may arise during marriage, you may find yourself wanting out. Marriage is work. Alongside of raising children, marriage is the most difficult, yet completely rewarding feat a person can experience.

When thinking about getting married or staying in your marriage, you must consider many factors. First, if you are considering marriage, you must ask yourself if the two of you make sense together. Are you headed in the same direction? Are you equally yoked? After reading this book you should be able to answer these questions and make an informed decision. Sadly, most who consider marriage fail to think through the fact that marriage is about spending a lifetime together with another person; This means forever, for better or for worse. To those who are already married, or to those who are rethinking their marriage; reading this book may help you remain married. There are many reasons to get married but only one reason for divorce. When thinking of marriage, you must remember to LEAVE NO WAY OUT.

This Author has been a follower of Christ her entire life. She has written this book based on her knowledge of love and loss regarding marriage. She is married for the second time and has experienced extreme differences between the two marriages. Her obedience to God has directed her path in writing this book. She would like for you to understand that the way you view marriage in general can set your marriage up for failure or success.