Jesus Makes Salsa by the Seashore

And Other Fresh-Approach Bible Studies 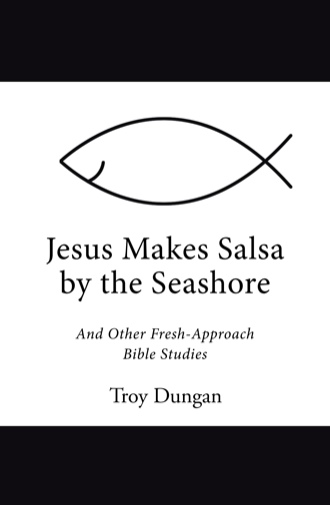 Jesus Makes Salsa by the Seashore

The setting for story this is the shore of the Sea of Galilee, which is really a lake - Lake Gennesaret - in Israel. It takes place sometime between Jesus' resurrection and His ascension into Heaven. Jesus had already appeared to His Disciples at least once since being raised from the dead. In John Chapter 20 He suddenly appeared in a locked room where His disciples were hiding because they were afraid that the Jewish authorities, having gotten rid of Jesus (so they thought), would now be coming after them. This John Chapter 20 appearance was perhaps only twelve hours or so after His resurrection. He told the disciples to have peace. But they did not quite get it. That was a tall order. They were afraid. But things changed for them big time just a verse later in John Chapter 20:22 when the scripture says He breathed on them and bestowed the Holy Spirit on them. Only then did they really understand fully who Jesus was and what He was teaching them. During their approximately three years of walking with him, they still only had their human understanding. Now the Holy Spirit illuminated their minds. All the other believers in Israel had to wait until about fifty days later at the Feast of Pentecost to receive the filling of the Holy Spirit. As Christians today, we are blessed to receive the filling of the Holy Spirit the moment we believe in Jesus.

So, with that background, here in Chapter 21:1-14 is the story you have no doubt heard many times. My Bible calls it Breakfast by the Sea. But, there is a really cool twist to the story that you probably have not heard. Okay, Peter and the guys have been out fishing all night and caught nothing. They are tired and frustrated. Peter saw that someone had built a fire on the beach. He did not yet realize that it is Jesus. At this point Jesus, knowing their night's fishing has been unsuccessful called out to the guys and told them to drop the nets on the other side of the boat. They did so an suddenly they caught so many fish the nets were strained almost to the point of breaking. Then Jesus told them to bring their fish over to Him.

John then recognized Jesus and told Peter who He was. Peter, always impulsive, jumped over the side of the boat and started swimming toward Jesus. But note what the text here said he did first. Peter put on his outer garment. Normally one would take off as many clothes as possible when starting to swim. So, what's that all about? Peter often made bad decisions. But he had true zeal in his love for Christ. This was no doubt one of those, seemed like a good idea at the time moments. But, thankfully he made it to shore. Meanwhile the other disciples, followed Jesus' instructions an brought the boat with the fish to shore near Him.

A point of application for us here is that love for Jesus is manifested in different ways by different believers. We need to let other believers worship Him in their own ways. For instance, some people raise their hands when they sing in church. Some don't. Some kneel to pray. Some don't. We need to cut fellow believers some slack. We don't all have to worship Jesus in exactly the same manner.

So, the guys dragged this heavy net full of fish onto shore near where Jesus had a fire going. The passage then says He had some fish and bread cooking on the fire. Well, first of all, where do you suppose Jesus got bread, fish and charcoal early in the morning on a deserted beach. 7-11? Nope. Well, we don't know where He got them. But if anybody could come up with those things in this situation, it would be Jesus....Being God and all.

Then He told the disciples to bring Him some of the fish from their catch. If one of he things He already had was fish, why tell them to bring over more fish. What's up with that? If He already had fish cooking, why ask them to bring more? Well, here's the cool twist. The normal Greek word for fish is ichthys. (That Christian fish symbol you see on the back of some folks' cars is called an ichthys. It means fish. That ichthys symbol came to symbolize Jesus). So, ichthys is the word He used. Bring over some of that ichthys that you just caught.

Meanwhile the text uses another word for the "fish" Jesus had on the fire along with the bread. The Greek word is opsarion. Now, that word CAN mean fish. But it has another meaning as well. It can mean a relish, condiment or sauce for fish. In context that is exactly what it means here. Jesus had made SALSA to go on the bread He had and the fish the disciples had caught. And the bread would have been unleavened. So right there by the Sea Of Galilee that morning, Jesus made the original fish tacos. Would you love to have some of that Jesus Salsa? I know I would.

Side note here: Why does the text then say that there were 153 large fish in the net? It is an authenticating detail in the story. And though the net was stretched beyond its normal strength, it did not break. Our application: Our "nets" are as strong as the purpose God has for us.

Now, we have had a little fun with this story so far. And, by the way, if God does not have a sense of humor, I am in a lot of trouble. But now in John Chapter 21, verses 15-21 take a very different and more serious tack.

You will no doubt remember that in the night and early morning of Jesus' illegal trials prior to His crucifixion, Peter denied Him three times. In this passage Jesus asks Peter three times if he loves Him.

Is there a connection? Maybe so. But, that is not the point of what is going on here. We need to consider the three Greek words for love:

Now, I must do a disclaimer here. Once I taught this study at a church (not my own). Afterward a retired minister of that church came up and pointed out to me that Jesus and the disciples would have been speaking Aramaic in their conversation. And there is only one word for love in Aramaic. My response was, that though that might be true, the New Testament was written in Greek. And two of the Greek words for love are used in this passage. I believe that the entire Bible is the divinely inspired Word of God. So I believe the following interpretation is valid.

In verse 15 Jesus asks Peter, "Do you (agape') love Me more than these?" It is commonly taught that "these" Jesus referred here were the other disciples. But the word Jesus used for these was in the neuter. So He would not have meant more than these other guys love Me. He meant the things of the world, the things that make up every day life - like fishing. In any case, Peter answered Jesus, Lord, You know that I (phileo) love You. Wrong answer. Jesus was asking for a commitment of unconditional love from Peter. But to his credit, Peter did not commit to something he knew at this point he could not give. Jesus then told Peter to feed His lambs - Lambs need to be fed. Peter was to make sure Jesus' new followers were provided for.

In verse 16 Jesus again asks Peter if he (agape') loves Him. And once again Peter declines to commit to unconditional love, telling Jesus, Yes, Lord, You know that I (Phileo) love You. Jesus told to tend his sheep - provide spiritual guidance to the followers of Jesus.

One of my most enjoyable and enlightening experiences was going to lunch with Troy Dungan. Not just any lunch, but the weekly Wednesday Bible study lunches where media folks from the Dallas Morning News and Troy’s WFAA-TV station would gather to hear Troy’s take on a Bible passage. His knowledge on the Scripture and his perspectives on life were always insightful and enriched my faith. They also strengthened my courage to face the rest of the week. This book is a must-read over and over.

Gathering each week, we could almost smell the fish and spices from Jesus’s breakfast fire. We prayed for Idgie the dog and for a child with cancer. Absorbing Troy’s poignant lessons, we tasted Jesus’s own special sauce. These lessons enriched us; they changed our lives.

Troy Dungan’s studies are refreshingly creative and biblically on target. I love how he thinks about teaching the Scriptures. He makes me smile, laugh, and reflect on the Scriptures in a very personal way. I cannot help but think, I wish I had thought of it that way. I sat there with him on more than one occasion when he led these studies at Channel 8, and I watched God encourage people through his studies. God has gifted Troy with wonderful creativity and insight of getting to the point.

Troy Dungan retired from a long career as a television weather forecaster in Dallas. He is now a Christian motivational speaker and a commercial spokesperson for carefully chosen clients. He is a native Texan and a graduate of Baylor University.