The letter of Paul to the Romans 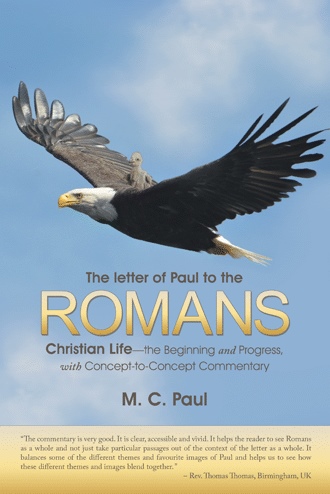 Most people in the world long for establishing contact with God. Christians claim that they have found the way for having not mere contact with God but a relationship with Him as well. They say that this relationship is through the new life in Jesus Christ, with God as the Father. This life has a beginning and it has to progress from day to day. Does Paul, the author of the epistle of Romans, want the whole world to know this? We may have to say ‘yes’, if we consider the progress of his presentation in the epistle. This may be the idea behind writing such a long letter to the Church in Rome, a Church which he never visited hitherto. First, he wanted them to know what all happened to them when they believed. He knew that they were all saved men and women who began to live this new life. He made it clear to them that they live this new life because they were justified by God when they put their faith in Christ. Secondly, he wanted them to know the possibility of leading a victorious life.

Paul has so many good words about the members of the Church in Rome. We are not sure who founded the Church. Circumstances those days, point to a possibility that it was founded by the converted Hellenistic Jews, who returned from Jerusalem after their experience of Pentecost. He knew the strategic importance of the Church. It was a fast growing Church located in the capital city. He placed before them the teaching he consolidated during his first two missionary journeys. No wonder, his presentation is very near to a systematic theology! But we know that his concern was the life in Christ which is to be enjoyed by the members of the Church there and everywhere. So far as the date of writing this epistle is concerned, there is every reason to believe that this epistle was written between 57 and 59 AD. The probable place of writing is Corinth.

The theme of the epistle, ‘justification by faith’, is not Paul’s afterthought in his ministry. It is seen in his very first message in the synagogue at Pisidian Antioch during his first missionary journey. He pointed out that they were not able to be justified by the Law and told them that it would happen only through faith in Jesus. (Ac. 13:39) Paul had known it by his own experience. God was merciful to Paul as his heart’s desire, in his struggle with the Law, was to please God. Paul says, ‘… I was shown mercy because, I acted in ignorance and unbelief.’ (I Ti. 1:13) In the Church history those who followed the Law with utmost sincerity like Paul went through such intense struggle. God was merciful to them too. They found victory when they understood the implications of the promise, ‘the just shall live by faith’. St. Augustine in 4th century and Martin Luther in 16th century AD are good examples of those who found this life of victory through the epistle of Romans. Others who do not go through this intense struggle and yet say they follow the Law may remain as Pharisees and Scribes in Christianity. These people try to please God on their terms.

There is an interesting point in Paul’s claims about himself. Once he was constrained to present his credentials of his Orthodox Judaism by listing at length in the epistle to the Philippians. He claims that he is faultless so far as his legalistic righteousness is concerned. (Ph. 3: 5, 6) If we infer from the seventh chapter of Romans that the struggle is personally about himself, we can understand that for Paul, all that mattered was his relationship with God. The Law was unable to make him rightly relate himself with God. It only satisfied his ego. He was justified only by the grace of God through faith in the resurrected Lord. Later he struggled to please God in his new found relationship with Him, by keeping the Law. It was a futile attempt. Then the revelation he received helped him to opt for the Law of Spirit of life in Christ Jesus leaving out the Law of sin and death. Thus he found victory. He wants all the believers to avail this opportunity to live a life of Christian victory. In Paul’s understanding the meaning of the phrase ‘the just shall live by faith’ can better be expressed this way: ‘those who are set right with God shall live’. This life he calls as ‘the life according to the Law of the Spirit of life in Christ Jesus’.

Calls for celebration of the life of victory and security in the Spirit. (8:1 - 39)

It is celebration time for a person who takes a positive step in line with the revelation he receives. Romans 8th chapter begins with no condemnation and ends with no separation. It leads us through the process of sanctification giving hope of future glory in the security cover of love. Those who do not live according to the sinful nature but live according to the Spirit are guilt free. They are set free from a life of failure, frustration and wretchedness and are ushered into a life of sonship, freedom, spontaneity, victory and security. Paul proclaims that it is through Jesus Christ that the Law of Spirit of life set him free from the Law of sin and death. There is a contrast between life under Law and life under Spirit. We can take them as two principles in operation in the life of a believer leaving him, option to choose between these two. One is the Law of sin and death and the other is the Law of Spirit of life in Christ Jesus. The choice of the latter is by the continuing attitude of faith in the completed act of God. God sent His Son truly as a man but without sin just as He created Adam without sin. He is the sin offering. So, flesh, the sinful nature in man is condemned. The Law was unable to set man free but God did it in His grace. Now, in the continuing attitude of faith the believer is able to receive the victory in his body by opting for the Law of Spirit of life in Christ Jesus and leaving out the Law of sin and death.

From verse 28 onwards Paul unfolds the grand plan of God in the life of a believer, which spans from eternity to eternity. The ground of his hope for future is God’s love which encompasses all known and unknown things to a human heart. Verse 28 is the key verse. The rest is an elaboration of it. This is one of the most popular verses which a believer takes as a personal promise of blessing. Paul presents this verse to them, not to ask them to be optimistic in their suffering about their future but to ask them to enjoy God’s provision in the present, visualizing the plan of God. A Christian is neither an optimist nor a pessimist. He takes things when God allows these to occur to him. Things do not work together for good by themselves, but in all things God works for the good of those who love Him. They are those who have been called according to His purpose. He proceeds to state the purpose in the following verse. It is to conform the believer to the likeness of His Son, so that His Son might be the firstborn among many brothers. Paul supposes that they all know this, as this is the natural consequence of adoption into God’s family. It is to take as their own, the righteousness of His only begotten Son. 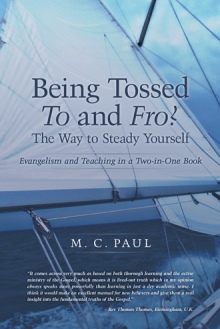 The epistle of Romans is strikingly different from Paul’s other writings and also from the writings of the other disciples—particularly in the aspects of the beginning and of progress of Christian life. Paul wrote about the work of God by the inspiration of the Holy Spirit. If the Holy Spirit inspired only Paul and nobody else, it is imperative that every doctrine on Christian life should be examined and understood with reference to this.

From Paul’s presentation, beginning from chapter 12, we can infer that God the Father resurrected the Law as “Christian ethics” after He resurrected His Son. Now, believers can see the Law no longer as that which condemns them but as Christian ethics present in them, which others can see and use to glorify God. This becomes possible when the believer opts for the Law of Spirit of his or her life in Christ Jesus and leans on the Holy Spirit. The deposit of Christ’s righteousness—Christian ethics—in the believer manifests itself as right relationships with his or her fellow believers, other people around, and figures of authority.

Chandra Paul Mangam, MCom (Andhra University), BD (Serampore College), is a retired lecturer who served for over thirty-six years at Noble College, Machilipatnam, one of the pioneering secular institutions in India—and considered the Cambridge of the East in the early years. While working as a lecturer, he rendered services as head of the Department of Commerce; warden at Clarke Hostel; and chairman of the Board of Studies in Commerce, Acharya Nagarjuna University. Besides his regular work, he has been serving as a Bible expositor and as an Evangelist for the last thirty years in student conferences, congregational conventions, and churches. During this period he pursued his theological studies externally through Union Biblical Seminary, Pune, and was awarded the Rev. Dr. B. P. Hivale Birth Centenary Prize in 1993, along with his BD, by the Senate of Serampore College, Kolkata. With his wife, Suguna, he founded Kutumba Subham Sahavasam (Family Bliss Fellowship), an unregistered organization that runs interdenominational Bible study groups. His earlier book, Being Tossed To and Fro? The Way to Steady Yourself!, was also published by WestBow Press.