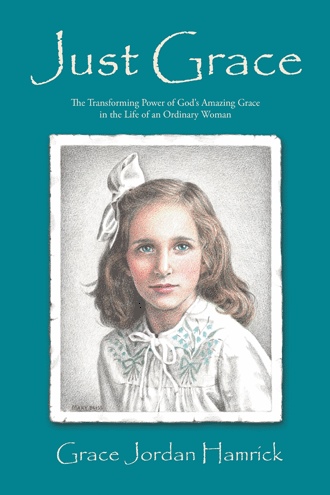 Story of “Just grace”
Grace in Grace—that is what this story is all about: God’s incredible, redeeming, amazing grace in me, Grace Hamrick. It is the story of a woman who but for the grace of God would not be around to write this book. It is also a love story, for God’s grace and His love cannot be separated. God’s unfailing, redeeming love is described in His word in Romans 5:8, “But God demonstrates His own love for us in this; while we were still sinners, Christ died for us.” Luke 1:9:10 also tells us, “For the Son of Man came to seek and save what was lost.” That was me---lost. And this is my story of Jesus Christ, the Son of Man, seeking and saving me.

This book is not written to point out the failures of anyone, but simply to tell of God's grace. It is about God’s love and the difference He has made in my life, touching and transforming it by His grace and truth. Our great God is bigger than our biggest mistakes and our greatest failures.

“Let the redeemed of the Lord say so,
Those He has redeemed from the hand of the enemy.” Psalm 107:2

I wonder who will ever read this book. There is absolutely no question in my mind that God has led me to write it, but I don’t know why. Is it just for me? Has it been part of my healing process as I have recorded this? Is it for my children and grandchildren to read about God’s faithfulness to Larry and me? Maybe it is for all of the above. I may never know, but that is God’s concern, not mine.
I think about how God told Joshua to walk with His people around Jericho (Joshua 6). I’m sure they must have felt so strange doing that -- how foolish (from the human view) to walk all around the city of your enemies, instead of attacking. I would have felt so silly and foolish doing such a thing as that, but God had spoken and they obeyed. I have felt foolish writing this book. I am not a writer and I certainly didn’t know what I was doing, but I know this is what the Lord wanted me to do, so I obeyed and I trust the Lord with the outcome. I feel like David who said in 1 Chronicles 17:16 “Who am I, LORD God, and what is my family, that you have brought me this far?”

From birth on, we will encounter a myriad of experiences that mold and make us what we are today. A great number of these experiences we have absolutely no control over. We did nothing to cause them, they just happened. Others we have created ourselves. Life is a journey and none of us knows when it will end or where it will take us. Only the Lord knows because everyone’s journey is different; we walk down different paths. Sometimes the path is level and smooth, and sometimes it is steep, sharp, rough and has many curves. We never go this path alone, although at times we may feel like we do. There is always One who is with us and goes before us, beside us, above us, below us and behind us. As Job said, “He knows the way I take” (Job 23:11).
The journey of writing this book began on October 22, 1994, the night when it felt like the Lord reached down into the very core of my being and opened up a deep wound. I was attending a women’s retreat at Myrtle Beach, SC and our speaker Patsy Clairmont was giving her message on “Hurting.” While she was speaking, the tears began flowing fast and hard. I thought I was going to lose it in front of hundreds of people, but thankfully, I was able to get out of the room as soon as she finished and before I embarrassed myself.
As soon as I could leave the conference room, I walked alone on the beach in the dark for a long time just asking, “Lord, what is going on?” As I talked with the Lord, the thought came to me to call Mr. Buck Hatch, a professor of many years at Columbia International University (formally known as Columbia Bible College.). He was such a gentle, kind and loving man, and in the past, I had sent numerous people to him for counseling. He was much loved by the students and everyone who knew him.
When I returned home to Columbia, I told Larry what had happened. Later I began to question if the Lord really wanted me to talk with Mr. Hatch or if it had just been my idea. I am ashamed to say it took a very long time before I actually spoke with him, and even then, the Lord brought Mr. Hatch to me. It happened one night as Larry and I were at a friend’s anniversary party. We were seated in their church and Mr. and Mrs. Hatch sat right down in front of us. I knew the Lord was prompting me to ask him to meet with me. I don’t know why I was so hesitant to do it because he was such a dear kind man. I kept sensing the prompting of the Lord to just lean forward and ask him. I’m ashamed to say, I didn’t. Later after the service, we went into another part of the church for the reception. Larry and I were in a corner of the room talking with another couple when I sensed someone approaching me. I turned and there was Mrs. Hatch. I didn’t even think she knew me and yet the next thing I heard her say when I turned to look at her was, “Hey, Grace. How are you?”
I responded, “Fine,”
Then she said something like, “What is the Lord doing in your life?”
I was stunned and my hands flew up to my face. I felt like a child who had been caught with her hand in the cookie jar.
I said, “Oh, Mrs. Hatch, the Lord has been telling me for a very long time to talk with Mr. Hatch”.
I knew this was a divine appointment. I could not believe this was happening as she took me by the hand and said, “Well, let’s go see him now.” Like a small child, I meekly followed her over to him.
Mrs. Hatch said, “Buck, Grace needs to make an appointment to see you.”
He was so sweet to me and said to call him later in the day when he could look at his appointment book and set a time for me to come. So, needless to say, I went to see him.
Before I went, I had already prayed that God would show him whatever I needed to do, and I would do it. If he thought I needed a counselor, I would go. I still had no clue what was going on and told him so. I told him what had happened at the beach and my life story, and that I didn’t know why, but I knew God wanted me to talk with him.
He said he wanted to really spend some time in prayer over this and asked me to come back after he had time to pray.
Several days later, I went back, and he said, “Grace, I’ve prayed about this and I think you need to write a book, and the title of the book should be about God’s grace. You need to tell your story about God’s grace.”

Just Grace: The Transforming Power of God’s Amazing Grace in the Life of an Ordinary Woman is Grace Hamrick’s story. A foolish decision made as a teenager had a devastating effect on her and an all-consuming guilt was destroying her, eventually putting her on a self-destructive path.

This memoir is a story of grace—God’s incredible, redeeming grace that rescued her. She describes how she came to realize her deep need for God’s grace through some of the heart-wrenching circumstances of her life.

We live in a world where there is much pain and suffering, and it is easy to feel like there is no hope, no future, no way of ever changing. But there is hope; and God can and does change people. There is no sin so great He cannot forgive; there is no life so messed up He cannot restore. There is no person so broken that He cannot mend. No one is ever beyond the reach of God’s mercy and grace. Grace Hamrick is living proof it is never too late.

Grace Jordan Hamrick has been involved with women’s ministries and Bible teaching for thirty-seven years. Her passion is to see people come to know the Lord Jesus Christ and lead them into a deep love and understanding of God’s Word and His power to transform lives.

Grace lives in Blythewood, SC. She opens her home for Bible study, counseling, and mentoring. She enjoys practicing hospitality, cheering on her grandchildren in their activities and spending time with her family.