THE ALLURING BRIGHTNESS OF HIS GLORY 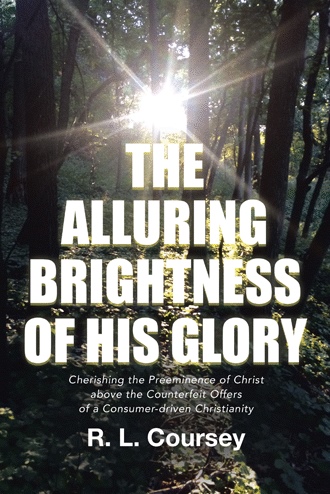 
The Vision of the Exalted Christ, its Inherent Cost and Accompanying Spiritual Power


Christ did not come to seek personal comfort, wealth, acceptance or honor. He came not to seek His own will, but the will of the Father. Where He has gone before us, and where He has set the example, we should be willing to follow. But if we are to do God's will as Christ did, we not only need a willingness like His, but also a mind like His. For we have no ability to understand His will, much less approve of it, so long as we embrace the principles and patterns of the world. Our minds must first be renewed before we can "prove what is that good, and acceptable, and perfect will of God." To discern His mind we must study his life.


If anyone ever missed an opportunity to make something of his life in the eyes of the world, it was Christ. If anyone ever had more potential to do or be anything in the life, it was He. If anyone was ever treated far below his true dignity, it was He. Never was there one so worthy who was so scorned, ridiculed, and put to shame. Never was there one so wise who was so misunderstood and misquoted as He. Christ could have been the greatest philosopher, mightiest warrior or most powerful ruler of His time, or all time. But it was not what Jesus could accomplish or become that guided Him. It was God's will.


Likewise, we must set God's will as our rule. Instead of seeking the highest seat, because we deem ourselves so worthy, we must forgo it and take the lower seat, because Christ has commanded it. By doing so we reveal that the principles, pleasures and pursuits of the world do not control us. To be lowest is only a burden to him who seeks, like the world, to be the highest. He who subjects his will to the will of God, will be indifferent to the position or place where that will is carried out.


Satan's offers are not always empty promises that he cannot deliver upon, but counterfeit offers to entice us away from something far greater, God's will. During Christ's temptation in the wilderness, He was tempted in all areas of worldly power, influence, greatness and ability, and away from God's will. "Turn these stones into bread." Become self-sufficient. "Jump from the pinnacle of the temple." Do it your way. "Worship me and I will give you the kingdoms of the world." Have it now. These are the three pillars of a consumer culture. And in overcoming these temptations, Christ has shown us God's will for our lives: to receive what God gives as sufficient, to receive it in God's way, and to receive it in God's time. He has also shown us those things that are definitely not to guide our lives: self-gratification, self-display and self-interest.


Christ rejected the way of pleasure, ambition and selfish gain, and choose rather the path of betrayal, shame and death. The same call comes to us as we follow in His steps. By submitting to God's will, and rejoicing in it more than anything else to which we could aspire, we will render powerless one of Satan's most powerful weapons in opposing God's kingdom, the temptation to worldly greatness and the praise of man.


The magnetic pull of the world on our affections will only cease by a God-ward attraction. It is only in the light of Christ that the church's fantasy of grandeur in the eyes of the world appears foolish. If Christianity is to conquer the world, it will only be through the preaching of the cross, and not the preaching of all those things that the world holds dear. The primitive church first conquered the world not by appearing scholarly, but foolish; not by being politically influential, but powerless; not by being outwardly successful, but an apparent failure; not by obtaining the world's praises, but their persecutions; not by securing its authority by a numerous multitude, but were few; not when it possessed innumerable resources, but little. This was designed by God for His glory. Once it obtained these other things, it ceased to conquer the world, and began to be conquered by it. Any desire to be esteemed by the world, above the desire for God's glory, is a surrender to the conquering power of the world.


As Satan tempted Christ, so he tempts us today. Pointing to the kingdoms of the world, and the glory of them, he says, "All these things I will give thee, if thou wilt fall down and worship me." Although always with an air of piety, the consumer-driven church is lured into following the counsel of Satan, while rejecting the example of Christ. He who is deity emptied Himself of His privileges and became a man. And not just any man, but the lowest of men, a servant. Dying not just any death, but death on a cross, as a condemned criminal. Such a vision should consume all our self-interest and pour contempt on all our pride. And instead of envy, cause us to pity those who are so consumed with the empty offers of the world.


The vision of the exalted Christ should compel one to renounce his own self-importance and self-seeking. The fact that God has given Him a name above every name, does not principally mean that we have a lord who is more powerful than any problem or enemy that we can name. It primarily implies that we must humbly bow our knee and confess His Lordship, and exalt Him even above our desire to solve all of these problems or subdue all our enemies. It implies taking the focus off of ourselves and centering our lives on the exalted One. It was for this reason that He was exalted, and not for the exaltation human selfishness, ambition or greed that are promoted by our culture.


As we study Christ's life, we will soon discover that God's will does not necessarily include the pleasures of the world, but, more importantly, it often goes contrary to the pursuits and values of the world, and contradicts its principles. No sooner is He born when they seek to take His life. He could no longer walk openly and unhindered in Judea, because the Jews sought to take His life. "He hath no form nor comeliness; and when we shall see Him there is no beauty that we should desire Him. He is despised and rejected of men; a man of sorrows, and acquainted with grief." Even His own kinsmen refused to believe Him and said He was out of His mind. He spends most of His life unnoticed and unknown, working in a carpenter's shop. And once He enters His public ministry, He appears foolish by calling those to be His disciple who were of the lowest social standing, and even more foolish by calling those who were esteemed in society fools and hypocrites.


All of these things were part of His passive submission to the will of God as He patiently endured that which would cause all mortal men to despair. But Christ was more than mortal man. he was the Maker and Sustainer of all things. So for Him they would be an infinitely deeper humiliation. But none of these things moved Him, because the greatness of man did not move Him. The pleasures of the world did not move Him. He was only moved by the will of God. That was His meat and drink; that was His delight. His passive submission to the burdens of life was not burdensome, because He occupied Himself with the active submission to the will of God in the keeping of His commandments. For Him there was no greater activity. "Behold I come to do Thy will."

"There are saint-like lives and martyr-deaths

which are not recorded,

and worth all the more in Heaven's sight

because unsustained by human admiration:

men that have given up ambitious hopes

because the paths of success were crooked and evil."

The real problem of the hour is not that we view our problems as insurmountable, nor that we fail to view our God as insuperable in the midst of all these problems, but primarily that we fail to count our God as inestimable, even above our need to solve all of these problems. It is the failure to perceive the supreme glory of Christ that moves the church to promote counterfeit offers that compete with His glory, and moves men to receive a counterfeit Christ, whose highest value consists not of His own excellency, but of His willingness to bestow upon us that which our earthly, carnal and temporal nature counts most excellent. This magnetic pull of the world upon our affections will only cease by a God-ward attraction. It is in the face of Jesus Christ that the brightness of the glory of God shines forth. He alone is the brightness of His glory. And unless we exalt Him to preeminence, we know nothing of that glory.

The extensive teaching ministry of R L Coursey has taken him throughout the continental US and into 19 countries. Besides speaking at various pastors, missions and leadership conferences, he has preached in churches from over 20 different denominations. His unique experience of serving on the faculty of several seminaries, including Methodist, Reformed and Pentecostal, has given him an invaluable insight into the length and breadth of the body of Christ that was necessary to write a book directed exclusively to the church. He now resides in Grand Rapids, Michigan, with his wife of 28 years, Claudia.