Life Is, As It's Been Given 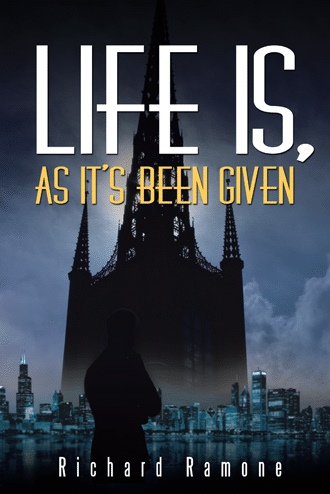 Even though the music was cranked up as loud as it could be, partially to keep him awake, Jason still heard the howling of the wind. Ever since he was a young boy, storms like this had always bothered him. He could not help but think that the storm was more than just natural weather. Jason had experienced the same weird feeling that morning when he saw the clouds over the city. He wondered what was really going on up there.

What a time to be going home, he thought. Three o’clock in the morning in the middle of a storm like this. Where did it come from? Jason could only remember a handful of times being out that late, or that early, depending on one’s point of view. This should teach me to burn the midnight oil. Jason saw a fierce display of lightning over the treetops in the distance and leaned in closer to the steering wheel to get a better look. Suddenly, there was another flash of light, accompanied by a loud crash and eerie laughter. That time the flash had been much closer and was so bright it hurt his eyes. In an instinctive reaction, Jason looked away. As he quickly focused his attention back to the road, with his eyes slowly recovering, he heard an odd noise that he knew wasn’t thunder. It almost sounded like an electrical transformer exploding. His thoughts suddenly took him back to that morning, and fear overtook him. He had a weird feeling that he was not alone, and he stole a few quick glances inside his car. He knew he was by himself but looked around just the same and hoped he wouldn’t see anything, or worse, anyone.

Another scripture Jason’s grandfather had taught him to say when he was scared ran through his mind. He didn’t say it, but he sure thought it. “For God hath not given us the spirit of fear,” Jason remembered, “but of power and of love and of a …” He looked in his rearview mirror and, not seeing anything, finished the scripture, “Sound mind.”

Suddenly, there was a loud explosion, and the sky lit up as bright as day. Stunned, Jason slammed on the brakes, and the car skidded sideways. Jason immediately turned the steering wheel in an attempt to regain control. The vehicle still slid several feet before finally coming to a stop. As Jason’s car sat sideways across the lonely stretch of road, he took a few moments to catch his breath. His attention was again drawn to the sky, and he couldn’t believe what he saw. An array of vibrant, glowing colors filled the sky. Shades of blue, yellow, red, and green shifted in kaleidoscopic color just above the trees. The sight was so beautiful and unlike anything he had ever seen. Even the aurora borealis paled in comparison.

Jason stepped out of the car for a better look. Once outside, he took a few steps and then realized the storm had passed. He looked around and wondered how a storm like that could just stop. No more wind, no rain, and not one cloud remained. There was nothing but a sky full of stars and a magnificent display of color over the treetops in the distance.

Without warning, another explosion lit up the sky. Jason looked in the direction of the light show, and what he witnessed terrified him. He saw, because of its size, a giant figure shoot across the sky, destroying the treetops as it got closer to the ground. The thunderous impact as it crashed knocked Jason off his feet. He slammed into the asphalt and landed on his right shoulder.

When he tried to get up from the rain-drenched road, Jason felt a sharp pain in his right arm. As he got back on his feet, he looked in the direction of where he thought he had seen the giant come down. The tops of the trees were still rocking back and forth, and he noticed that although the sky was back to normal and full of stars, the colors now radiated through the trees up ahead. Whatever came down, came down there.

Jason eagerly climbed back into his car and drove about half a mile so that he could get as close to it as possible. He just had to find out what it really was. Maybe now he’d get some answers. After he drove as far as he could, he pulled the car over to the side of the road. When he got out, he turned in the direction of the glow. He was closer, but he could tell he would have to go the rest of the way on foot. Whatever it was had landed right in the thick of the trees. Jason looked down and shook his head, “Of course.”

Making his way on foot was difficult because of the darkness and trudging through thick mud. Thankfully, the glow of color provided some light, at least enough to help him find his way. What a day! First this morning with all of its drama and now this!

Jason noticed that fear had left him, but he felt no peace either. All that was left was a nagging curiosity.

What was that thing? It couldn’t be a person. The closer he got, the more broken branches he came across, and the more broken tree trunks he had to climb over. He noticed the ground was dry, and he felt a distinct temperature change. It was much warmer, not at all like it should feel near Lake Michigan in October.

Jason was able to make out a clearing up ahead. He stopped for a moment and looked behind him but could no longer see his car. All he saw was a thick wall of trees. He looked at his watch and, with a frown, shook his head in disbelief. The hands of his watch were spinning. This day keeps getting better and better.

Life was going well for Jason Porter, a man whose position on the world stage was as comfortable to him as a second skin. His company, Twenty-Second Century Medicine was competing to become the global authority on medical care. Life could not have been any better; however, unknown to Jason that was all about to change.

Jason will soon be shown a rare glimpse into a world hiding in plain sight and will find himself in the crosshairs of a demonic power whose only objective is to end his life. A mighty angel is sent to protect him from this evil slaughter and from himself. Because he turned his back on God and freely walked away, Jason has opened himself to the demonic power and has unknowingly given them the right to his life.

What Jason does not know is that if he fails to turn and give his life back to God, the angel who was sent to save his life will have to take it.

Richard Ramone was born in Detroit, Michigan, the oldest son of Raymond and Hortense. He now lives in North Texas with his wife, Judy. They have two grown sons, Joel and David, and a beautiful young granddaughter, Nicole.

Richard’s parents saw to it that he and his brothers, David and Gilbert, grew up in a Christian home. Richard faced many adversities as a child, and as he grew, he developed a deep interest in the spiritual world, especially the roles that angelic and demonic powers play in our daily lives.

Richard’s hope is that the reader will come to an understanding that no matter the circumstances in their life, and even though they may stand alone in the physical, it does not mean that they are truly alone.