The Cattle on a Thousand Hills

Knowing the Real God Who Cares about Our Real Lives 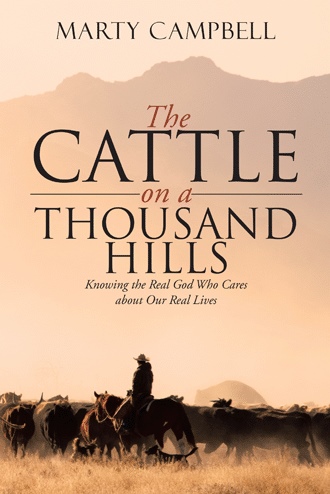 Working for the Stone Hereford Ranch was one of the healthiest things my grandpa, Bob Campbell, ever did. For most cowboys, his was a dream job. He didn’t build fence, drive tractors, or even drive a feed truck very much. His job consisted of riding good horses through herds of Hereford cattle, checking health, roping the sick ones, and doctoring them in the pasture next to Mama. He truly made his living with his rope.

Even though riding under the blue skies of Eastern Oregon filled his lungs with clean air and kept a smile on his face for most of each day, that wasn’t the healthy part of the job. Heck, when he first started the job, he’d ride around the ranch and the lots with a cigarette hanging from his lips most of the day. Fresh air has a hard time getting through those filters. The job carried a lot of good things with it, but they weren’t the healthiest parts. He got to take his teenage kids on as hands once in a while, but that wasn’t always the healthiest thing in the world. He got to meet great cattlemen from all over the West as they came to purchase seedstock for their operations. He even got offered a job working for John Wayne on his Arizona spread at one time, but even that buoy to his confidence wasn’t the healthiest part of his job. The healthy part of his job was the exercise that came with it. Riding isn’t a whole lot of work, of course, unless you’re posting a trot around a twenty-five thousand acre circle, and there weren’t any of those on the Stone spread. Roping will exercise your arm a little, but not to the extent recommended by most P.E. teachers. He had things set up so he didn’t have to get off to open gates, so that rules that out, as well. No, the exercise came when he had to doctor a calf. Roping one and getting the calf veterinary care without help proved to be a challenge, sometimes. He had a number of ways of getting it done, and with bigger cattle, it seemed to be a little easier. He could lay trips, tangle legs, and perform a number of tasks that were set up to get cattle on the ground. However, little guys always threw him a curve, probably because they seemed like they’d be so easy. One time, he was riding through a bunch and saw a droopy headed baby calf who seemed to have a combiotic deficiency of some sort. It just so happened that Howard Stone and a couple of buyers happened to be out there looking at that bunch of cattle at the same time. Not one to get too nervous in front of an audience, Grandpa rode in and quietly roped the calf by a neck and front leg. He was tied off hard and fast, so he got off and moved in to get him on the ground. Unfortunately, the little booger was healthier than he appeared. For a good long minute, Grandpa wrestled that calf while his horse worked the rope. Unfortunately, all those cigarettes had diminished his lung capacity, and he had gotten winded to the point of almost having to lose his breakfast. All this took place in front of an audience, and when he finally got the calf flanked and on the ground, he looked up to see them watching him gasp for air. The heaves came hard and fast, and between them, he looked up at the gentlemen watching, looked in his shirt pocket at his pack of smokes, reached in and threw the pack on the ground. He never smoked another cigarette again.

Sometimes, healthy comes after a struggle. We make the right choice only after we see how bad the wrong choice has treated us. God will allow us to make the wrong choice, but sometimes, he’ll throw a challenge at us we can’t handle because of the life we’re living. I’m thankful for those lessons. They help us move ahead in life and leave those things that are killing us behind. Proverbs 22:3 says, “The prudent see danger and take refuge, but the simple keep going and pay the penalty.” If we see something is hurting us, and we don’t throw it away, we’re pretty simple, indeed.

Everyone who rides through God’s creation longs for the romance John Wayne offers from the back of a Hollywood horse. However, the reality of those same folks’ ranch lives often hits them in the side of the head like the handle on a squeeze chute. The whirlwind of the modern-day cowboy life leaves seemingly little time for praying and even less time for sermons that don’t hit home. God needs to be real, and he needs to be found in the everyday, dawn-to-midnight struggles and joys of true-to-life, cow-feeding, bronc-stomping folks who live in a world where there are espresso shacks in feed-store parking lots.

In The Cattle on a Thousand Hills, stories of genuine individuals who live life on the working end of a calf-puller teach lessons that only a real God can provide, set in the real world in which cowboys, horsemen, and ranch wives live. Combining true stories and life lessons with biblical wisdom, this book is at the same time humorous and poignant. Its pages will provide a look at life through God’s eyes that can be applied to anyone’s life, but especially to the folks who spend their summers cutting hay and their winters feeding it.

Marty Campbell, his wife, Mandi, and their children, Parker and Crae, minister to the cowboy world through Broken Horn Ranch Ministries, out of Pendleton, Oregon. They have a mission of bringing Jesus to the Western world through Western events and regular fellowship, introducing people to a real God who cares about their real lives.