A Mystery of Truth, Faith, and Reason 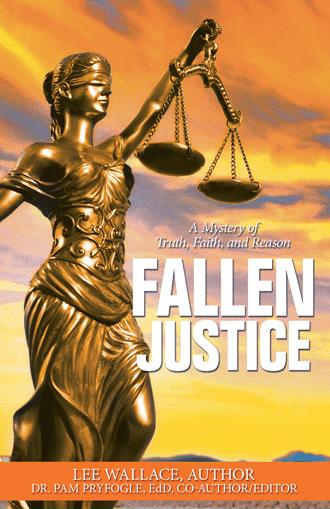 This fictional account was inspired by the true story of a young mother trapped in an inescapable criminal justice maze after a toddler died from catastrophic head injuries allegedly suffered at her daycare center. The young mother's twenty-year battle against the criminal justice system was fraught with unexpected and unexplainable roadblocks and struggles that often tested her and her family’s faith in the justice system, a loving God, and in each other. Although the mystery was inspired by real events, the names of all individuals, businesses, entities, places, and locations are fictional. Any name used that resembles an actual person, living or dead, is purely coincidental.

The overshadowing questions are: Was the caretaker or someone else responsible for this child’s death and who should pay the penalty? Why did God allow these tragedies to happen? How were the criminal charges resolved? Is our criminal justice system defective or healthy? What can we learn from pain and suffering? What are our responsibilities? What does one do when life does not make sense? To whom does one turn for strength and comfort during a crisis?

Although written from the perspective of a paralegal, this writing is not an analysis or critique of all the legalities and forensics mentioned. Instead, it avoids many of the complex forensic issues, legal arguments, statutes, and court procedures that often resulted in nothing more than a tit-for-tat exchange of legalese, arguments, hyperbole, and opinions during thirteen years of court battles.

The first postscript to the story describes the need for criminal justice reforms along with suggestions of how to make it work more efficiently and justly for rich and poor alike, regardless of race, skin color, life-style, or creed.

Finally, this story will encourage having faith in God and an eternal perspective when life is not fair and does not make sense.

My life changed forever in unimaginable ways one busy morning with a phone call from my eldest daughter. From the tone of Lori’s first words, I sensed that something was wrong, so I listened carefully as an earth-shattering story unfolded. She explained that the previous afternoon paramedics rushed Angie, a toddler attending her newly established daycare, to the hospital after she could not be awakened from a nap and was not expected to survive. Her words soccer-punched me in the stomach, made my heart skip several beats and left me breathless.

Lori gave me a quick summary of what happened but did not understand how a simple fall could have been so dangerous. Her two-year-old son and Angie were watching a video when they began jumping back and forth from the couch to the oak coffee table. Before going into the next room to care for her infant daughter, she sat them down again to enjoy the video but shortly she could hear that the children had resumed their frolicking. Suddenly, she heard a thud and Angie crying out, so she quickly returned to the living room to find the toddler lying on her back in front of the coffee table. Lori picked her up off the floor, hugged her, and checked for injuries or a bump on her head but found none and assumed Angie’s groggy demeanor was from being overly tired. So, she prepared a bottle and laid her down for the scheduled afternoon nap.

Later that afternoon, she was unable to awaken Angie and noticed she was having trouble breathing and not responding to her voice and light shaking. Her immediate response was to give CPR and call 911 for help. A few minutes later, paramedics arrived and transported the unconscious child to the emergency room at the hospital. Mysteriously, neither Lori, paramedics, police, or emergency room doctors could see any signs of physical trauma or a head injury, although they were told about the short-distance fall.

Shortly after paramedics arrived, an army of police officers and detectives from the city police and county sheriff office showed up. As usually happens when there is an unexplained injury, police investigators asked Lori many questions and repeated them several times before audio recording only a part of the entire interview. Meanwhile, detectives asked her to compose a handwritten statement detailing the events of that afternoon. Without hesitation, she began doing as they instructed but had difficulty writing the events in their proper chronological order while answering their many questions and was concerned because police detectives would not allow her to rewrite the statement as she desperately needed to do.

During the phone call to me, my daughter asked me why the police photographer would ask her to take Angie’s bottle out of the refrigerator and put it back in the playpen where Angie had been sleeping and take photos of it. I replied that was not proper protocol and it raised a red flag about his motives. He also snapped many photographs of the entire house as well as contents of the refrigerator and the outside of it where a scripture was posted that mentions patience as a fruit of the Holy Spirit. Lori was further puzzled as to why police questioned her about why she used the herbs, teas, and supplements in her kitchen.

She mentioned that due to the nature of their questioning, she was afraid they thought she might have done something to harm Angie. I agreed with her and recommended that she not say anything more to the police until she talked to an attorney. She replied that a friend from church already referred her to Attorney Wilson who was believed to be the best criminal attorney in town, and she and her husband had an appointment with him for the next morning. Without Lori asking for help, that same friend paid the $5,000 first deposit of the retainer to the attorney on her behalf.

Truth, faith, and sound reasoning collide with criminal justice after a toddler dies from catastrophic head injuries allegedly inflicted by a young mother at her daycare center. Her fight against murder charges is fraught with numerous unexpected and inexplicable roadblocks and struggles that often tests her faith in the justice system, a loving God, and in others. However, the names of all individuals, businesses, entities, and locations are fictional and any names resembling an actual person, living or dead, are purely coincidental. However, all facts and events are as they actually happened and documented by personal and court records.

Although written from the perspective of a paralegal and the mother of the defendant, it is not an analysis or critique of all the legal and medical forensic issues involved. However, important evidence and facts not previously known by the media, the public, the judge, and jury are revealed.

The first postscript to the story discusses several criminal justice defects and makes radical suggestions that will make the systems more efficient and just.

Finally, this story encourages faith in God and developing an eternal perspective when life is not fair and does not make sense.

Author, Lee Wallace, was born at the dawn of the atomic age in 1942 near Oak Ridge, Tennessee, one of thirteen children. She professed faith in Christ and was baptized as a seven-year old. Today, Lee is a mother, grandmother, and a great-grandmother. She lives in Riverside County, California and attends church in the area.
Lee has more than twenty-five years of experience writing as a paralegal. Lee’s goal in writing this fictionalized account of her real-life experiences is to inspire, educate, and encourage those facing similar circumstances. For privacy reasons, the identities of all individuals, professionals, public and private entities, dates, and places have been changed.
Co-author/editor, Dr. Pam Pryfogle, EdD, is an Early Childhood and Education Professor at California Baptist University, Riverside, California, and an experienced editor. Pam served in the region of Lira, Uganda as a Purpose Driven Practitioner and PEACE Ambassador through Saddleback Church of Lake Forest, California. Pam has most recently traveled with her filmmaker son to Northern Uganda to work with village wives. She also facilitates two support groups and provides counseling to individuals seeking purpose and direction through the crises in their lives.
Pam is an author and researcher. As an Early Childhood Content Expert, Pam journals her life’s experiences and incorporates her writing in her blog https://travelinggrace.wordpress.com/. Her most recent published work is Adversity Influencing Regard for Education in Northern Uganda: A Phenomenological Study of Langi Mothers’ Value of Learning.
Pam lives in St. Maries, Idaho. She is a Court Appointed Special Advocate (CASA) working with children taken by the court from their homes and placed in Foster Care. Pam is blessed to be the mother of five and the grandmother of nine. Care of her three youngest grandchildren occupies much of her time.