SUICIDE: Prevention and Helps for Those Left Behind 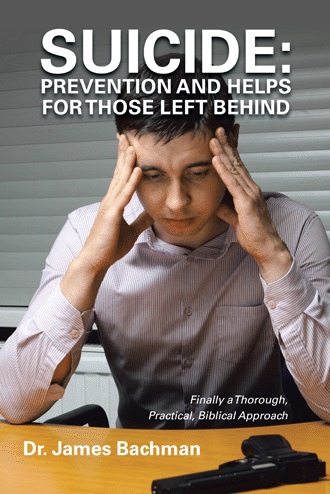 When I was about eighteen years old, I was a monument salesman for a Rock of Ages. Following up on obituary leads, I knocked on the door of a recent widow. She invited me in and started to unload her burdens on me. She had undergone several serious surgeries within the last year or so, her brother had hung himself, and then her husband got out of his car at work and fell over dead of a heart attack.

I excused myself and went to my car to get my Bible. Sitting down with her at the dining room table, I explained that salvation was the first necessary step toward lifting her burdens. I carefully went through God’s truths about being born again. She sweetly bowed her head and received Christ by faith as her personal Savior. Her countenance was totally changed and her heart lifted. I then gave her the next steps needed in her new Christian life, which included getting into a Bible-preaching church and reading her Bible.

It was then that she revealed her shocking plans for that afternoon. She said everything was prepared upstairs to take her life as her brother had done, but now she had something for which to live.

The Devil enjoys controlling your mind by having you mull over things that can never be resolved. The constant pondering of why’s and what if’s is an ongoing mental exercise that tends to wear your mind and spirit to a frazzle and robs you of sleep and peace of any kind.

Several years ago I had the joy of leading a man to Christ who was the superintendent of a nearby school district. Then his daughter who was about eighteen years old was killed in a tragic automobile accident. He and his wife were totally devastated. The constant thoughts of their loss and questions of why this precious and promising life was wiped out were more than they could bear.

I bought a gift and took it to his office. We talked a bit and prayed before I handed him the gift. He looked a bit confused when he realized it was a puzzle. A beautiful picture on the cover showed what it would look like when completed. He thanked me. Then I said, “Don’t bother to try putting it together.” He asked, “Why not?” I pulled a plastic bag out of my pocket that contained about fifty pieces of the puzzle. I put it back in my pocket and told him, “You don’t have all the pieces. The longer you work at it, the more frustrated you will become.” Then I added, “So it is with the death of your daughter. Only when you get to heaven will you have all the pieces.”

He put the box on his bookshelf and related to me later that whenever he would start to wrestle with the why’s and wherefore’s, he would look up at the puzzle box. It would remind him that this thought pattern was worse than useless and would only lead to more frustration and depression. It is better to leave all that with our loving, all-wise God who will put the puzzle together for us in His time.

My friend, God wants you to think on things that are pure and lovely and of good report. (Philippians 4:8) Your greatest focus of attention should be on God Himself, Who has all things under control. Trust Him! Thou wilt keep him in perfect peace, whose mind is stayed on thee: because he trusteth in thee. (Isaiah 26:3) Busy your mind thinking about God’s will for you this moment and His ability to help you fulfill it.

Bullies are usually intimidators who are stronger in body, position, or ego and use threats, taunts, or cruelty against those they seek to destroy.

They try to make their victims feel fearful, embarrassed, ashamed, unwanted, hated or useless. Their aim is to hurt them physically, socially, or emotionally. They are usually attempting to get rid of their victims by running them off or getting them to commit suicide.

In the Bible bullies are called “oppressors.” That term means men of violence, terrible ones, and those who trample down others. God gives commands against oppressing in Leviticus 25:14 and 17; Deuteronomy 23:16, 24:14; and Proverbs 14:31.

Words for oppression are to bruise, put down, terrify, crush, overpower, and wear down. A sinful, proud, selfish, and wicked heart is found in an oppressor or bully.

Being on the receiving end of bullying is not a pleasant experience, but it is an opportunity to let your light shine and to bring God glory.

No one has been bullied like our Creator and Savior, Jesus Christ. He was ridiculed, struck, spit on, mocked, scourged almost to death, stripped naked, falsely accused, challenged, betrayed, and crucified.

Father, You understand the purposes of my being bullied. Wherein my wrong actions may be part of the cause, forgive me and help me to change. Help me to respond to any undeserved bullying the way Joseph, Paul, and Christ did. Thank You for promising to help me through this. I want You to be glorified through my sufferings. In Jesus’ name, Amen.

Do you know someone who is suicidal or people who have lost a loved one to suicide? They need this book! Pastors, counselors, and even lay people can find the real causes and deterrents of suicide and how to help the bereaved find healing.

Suicidal people need the program of long-term transformation of thoughts and actions in addition to the short-term emergency prevention information provided in this book. They also need to understand and properly handle suffering and find and fulfill God’s real calling for their lives.

Many real-life stories experienced in Dr. Bachman’s ministry add great insight and interest for the reader.

Dr. James Bachman spent thirty-two of his fifty-plus years of ministry as the senior pastor of Roanoke Baptist Church. He is known for his caring, biblical, and helpful counseling. He attended Michigan State University and Grand Rapids Baptist Bible College and Seminary, and he received his doctor of divinity degree from Shawnee Baptist College.

His wife, Sharon; daughter, Vicky Bachman Pope; and sons, Dr. Mark Bachman and Dr. Jack Bachman, have a combined 130 years of full-time Christian service. God has enabled the author to rescue several people in the process of committing suicide and help many bereaved find new purpose to go on with their lives.

“Suicide in the military is a dreadfully serious problem. I personally believe that leaders and chaplains at all levels of government and military service will reap immense benefits and spiritual insights from reading the exceptionally useful and practical compilation of thoughts in this intriguing book.” —Colonel J. Tyler Ryberg, USMC (retired)

“This book is an incredible wealth of biblical wisdom! It is an indispensable resource for prevention of suicide and healing for those suffering in the aftermath of such a horrible tragedy. It includes a tremendously practical and solidly scriptural prevention program that can be simply applied in one’s personal life.” —Mike Tarr, senior pastor