The Stone of Ebenezer 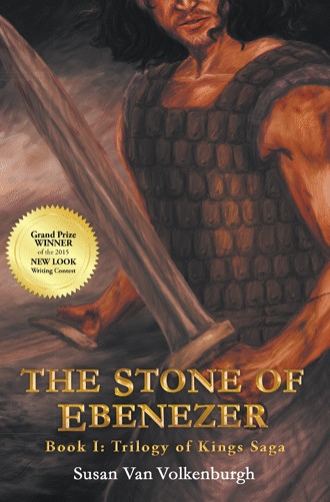 The sun stood at its full height over the once lush valley, laid to ruin by the ravages of war, now a barren wasteland littered with corpses and blood-soaked earth. Heat bore down upon them despite the early spring season. A sanguineous aroma filled the air, mingling with sweat as it ascended to assault the nostrils. Blood spewed forth from his victim as his sword sliced through flesh and bone. Nagad looked with horror at the great slaughter strewn about the field: soldiers ran, bodies fell, smoke rose. He seemed to be caught in a raging tide that threatened to engulf all in its path. The air rang shrill with the sounds of battle: swords clashing, spears splintering, cries of the dying. Nagad retched as he took in the scene.

From behind, he heard the creak of leather and the scrape of metal. Startled, he spun around. He caught the glint of a sword as it struck out at him. Instinctively, the young conscript lifted his shield to block the blade of the large Philistine. The thrust was deflected, but the tip of the sword nicked Nagad on the left shoulder. Down his bare arm, warm blood trickled.

“Ha! Well, played Hebrew,” scoffed the enemy. “But you have been marked by my blade.”

He had no voice. The enemy lunged at him with intimidating agility. Spurred on with renewed vigor, Nagad sidestepped, striking his foe across the left flank. The enemy recoiled, drawing himself away from the inflicting blade. But his armor was thick; the sword turned aside, marring the breastplate, yet not biting flesh.

The Philistine growled as he swung down upon the young Hebrew. Nagad brought his shield up to meet the enemy’s blade. His footing gave way as the brutal attack pushed him back.

With unrelenting waves, the adversary beat down the young conscript. Size and experience served the enemy well as the youth struggled to stand against the onslaught. Their swords rang as the contest raged. The young conscript grunted in his effort

Taking a clout to the head, Nagad fell, landing hard upon his side.

“It is enough,” spat the enemy.

As he lifted his shield, the young Hebrew pushed with his feet against the hard earth, scrambling away from the foe.

The Philistine paced toward his prey. Standing over the encumbered youth, the enemy raised his sword.

“Away with you dog!” snarled the Philistine. 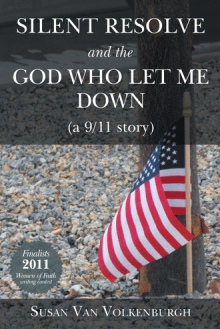 Silent Resolve and the God Who Let Me Down
Susan Van Volkenburgh
$13.95

NAGAD's life was perfect until it was torn apart by the ravages of war. Now, haunted by his past, this young conscript must meet the enemy in battle. With shaking rage the nations collide in a fierce conflict for dominance. Yet more is at stake than the survival of a people. The dispute contests the claim of immortal supremacy, the outcome to prove whose god reigns omnipotent.

And so, Nagad of Benjamin pushes on through the raging tide of battle. But to no avail. Soon crushed by the mighty war machine of Philistia, thousands of Hebrew soldiers lay slaughtered upon the carrion infested field. Hope has abandoned them. Then it is remembered, that in the days of their fathers, any army that bore the Ark of the Covenant could not be defeated. They need the Ark, for only then can the Chosen of God prevail against the enemy.

But they are wrong.

Oncology Nurse turned homeschool educator, Susan Van Volkenburgh is an author of Christian fiction and nonfiction books. As a musical evangelist, Susan travels with the gospel group, the Van Martins. After the death of her father on September 11, 2001, Susan began speaking of her experience. Her book, Silent Resolve and the God Who Let Me Down (A 9/11 story), recounts Susan’s loss and subsequent spiritual journey.

Born too late to experience antiquity first hand, Susan spends much of her time studying and teaching ancient history. Therefore, it seemed only natural that she should draw from the experience of grief and trauma to write THE STONE OF EBENEZER, a story of faith and restoration through the medium of Biblical fiction.

Susan is married and has three children. She lives in the Dallas/ Fort Worth area.