Finding Joy in the Midst of Sorrow

One Family’s Journey from Tragedy to Triumph…and Purpose

by Mike McCrum With Debbie McCrum 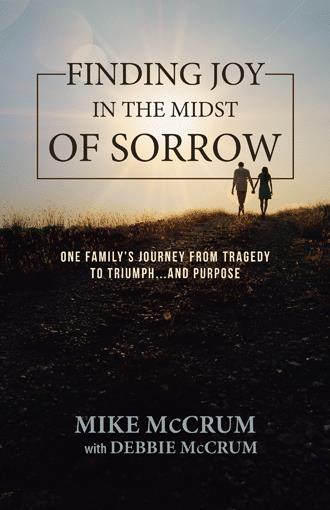 On May 5, 2014 tragedy struck our family. What happened on that day would change our lives…forever.

I was driving to the Atlanta International Airport to pick up our thirty-three year-old daughter, Cherith. She was returning from a company cruise of the Mediterranean. It was the trip of a lifetime.

In the last entry of her diary Cherith had written, “This was the best day of my life!” Now, she was on the last leg of her flight home from Rome with a two-hour layover in New York’s JFK airport. We could hardly wait to see her!

It was 8:00 p.m. when my wife, Debbie, called and said to turn around and come back home. Cherith had phoned to say she had attempted to board the Delta aircraft, but got off when she suddenly became ill. Her plans were to spend the night in a nearby hotel and catch a standby flight home in the morning.

There was something not quite right with how Cherith had ended their conversation. She said, “Mom, would you pray for me?”

Fortunately, Theresa Blakey, her coworker and traveling buddy, insisted on staying behind with her. She called an hour later on Cherith’s cell phone. “Mrs. McCrum. Cherith has become unconscious. The EMTs have arrived. We’re on our way to the hospital.” What was going on?

By the tone in Theresa’s voice the situation seemed rather serious. But, surely Cherith would be okay. Maybe this quick trip to the Jamaica Medical Center was only precautionary. Debbie and I were hit broadside with confusion. Having to interpret a family crisis hundreds of miles away through a brief cell phone conversation made the situation difficult to process.

At midnight the emergency room doctor called to give an update. Cherith was still unconscious and they were working hard to find the problem. At the same time our other two daughters Destiny and Amber, both nurses themselves, were on the phone with ER personnel, trying to get answers.

That’s when reality sank in—Cherith was fighting for her life.

We were struck with unwanted pangs of anxiety and fear. This just couldn’t be happening. One day our daughter is fine and healthy; the next day she’s on life support. What reason did we have to hold out hope?

At 3:00 a.m. the phone rang. It was the ER doctor. The voice on the other end was somber and to the point. “Mr. McCrum we have found the problem—a large mass on your daughter’s brain stem. However, the tumor is inoperable.”

There was an eerie pause. My emotions started caving in around me. Then came the words I didn’t want to hear. “We’ve done all we can do.”

In the weeks that followed, concerned friends would come up to Debbie and me and ask, “How are you guys dealing with all this?”

Even in the pain both of us had good reasons to go on living, to thrive, not just survive. God had been faithful to us time and again in the past. Could we not trust him in our weakest hour?

We held on tightly to the words Jeremiah wrote as he watched Jerusalem, Daughter of Zion, being overtaken by the Babylonian army. Despite their tragedy, the weeping prophet provided this hope:

The steadfast love of the LORD never ceases; his mercies never come to an end; they are new every morning; great is your faithfulness.

Every day it seemed God’s mercies were unfolding before our eyes. I began to openly share all the surprising things God was doing. The feedback was unanimous: “Mike, you’ve got to write all this down. We need to know how to go through life’s tragedies.”

An Invitation to Join the Journey

Every family writes its own unique story. In this transparent and moving account, you’ll be inspired as Mike and Debbie McCrum tell the story of their family’s challenging journey of faith, from tragedy to triumph…and purpose.

Finding Joy in the Midst of Sorrow is written to help families:

Discover the purposeful role God has planned for their lives.

Witness a family bravely persevering when every instinct screams QUIT!

Pass on to future generations a legacy of God’s hope and faithfulness.

Find the courage to face their fears and embrace the possibilities that were created just for them…as they live in the joy of trusting God!

“People today yearn for an example of how to navigate through life’s tragedies. Mike and Debbie’s powerful story will grip your heart and inspire you to valiantly trust God no matter what challenges you face. This book transcends time and will be a valued treasure for generations to come.”

Mike McCrum is Care Ministry Pastor at Fellowship Bible Church in Roswell, Georgia. He and Debbie are graduates of Tennessee Temple College. Mike received his M.A. in Biblical Studies from Dallas Theological Seminary and D.Min. from Gordon-Conwell Theological Seminary. The McCrums have been married forty years and reside in Woodstock, Georgia near their four children and six grandchildren.