Jesus' Stuff and Our Stuff is the Same Stuff. 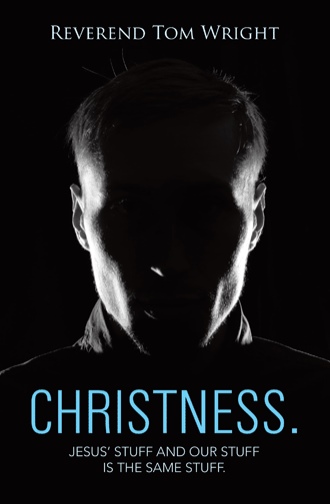 The thesis of the book is that the Believers have a Christness: something identical between Jesus Christ and themselves – not simply Christ-like, as so many writers claim.

This is not “New Age” – it is “Old Age.” Scriptures describing Christness are literally dripping out of chapter-after-chapter throughout the Bible – yet, modern-day Christianity has not delved into this truth nor developed the profound themes inherent in it. I make the case that scripture teaches that Jesus' Stuff and Our Stuff is the same Stuff (see excerpt entitled, “Stuff” below)! Empowered by an understanding of Christness, the Believer is capable of much more glory than modern-day Christianity embraces or offers.

Keep in mind that I am not saying these things – Jesus is saying them! Jesus is saying that we have a Christness just like He does. Christians can no longer allow the implications of Jesus' remarks to intimidate them. A spiritual revolution will explode as the notion of Christness is embraced in His Church! The impact of Christness will be similar to the Copernican revolution caused by the discovery that the solar system revolves around the sun rather than around earth. The Christness equivalent of the revolution is, Christ is not outside trying to get in – instead, Christ is inside you trying desperately to get out!

Christian book buyers will be attracted to this book because it deals with being rather than conduct. The modern-day Believer is burned out and exhausted over conduct issues. My book focuses on who the Believer is rather than what he/she must do. Believers are asking, “Is there anything fresh and exciting in Christianity?” The answer is, “Yes, it's you!”

I am writing this book because the spiritual revolution it will create is long overdue.

I'm just going to develop one particular thought in this chapter. We're here to talk about Sanctifying Grace. What does Sanctifying mean? Sanctification is a 95-cent word: it means Holiness. Holiness? You're probably thinking: Who cares about Holiness? What a limp-wristed concept that is! I'm going to try to make a case that isn't true. My analysis will be brief and cut to the core.

I want to read the main scripture for this chapter. You only have to read 27 verses into the first book of the Bible to find out what this ballgame is all about. Genesis 1:27 reads: “So God created man in his own image. In the image of God created he him; male and female created he them.” And as you know, when Adam bowed his knee to satan, that image was shattered – but we were all created in the image of God. And when we have become re-constructed, if you will, by accepting Jesus Christ, that image has been put back together.

Some people wonder, Why does Aunt Matilda not believe? This scripture makes it very clear, Satan is blinding her. Non-believers are blinded. They can't see the truth. Okay. Now having said that, let's go to the underlined section in each text. “God created man in his own image, in the image of God created he him...” Then in the second text we read it says, “Jesus is the image of God...”

My wife, Luanne, used to think like this. She doesn't think like this any more, but she used to say, “Jesus is over there and I'm over here. There's a gap between us. He's divine and I'm only human.” Well, if you think this way – in other words, if you don't understand that Jesus' stuff and our stuff is the same stuff – you will always see Jesus way over-there on the other side of a gap. But, if you understand that your stuff and Jesus' stuff is the same stuff, then you're in this thing together! There's no separation! As you work your way through the implications of this notion, you'll find it extremely healthy and spiritually invigorating. That's what I want to share with you.

Has anybody told you about that? Does anybody understand it? Unfortunately almost everybody thinks Jesus is “over-there” and we're “over-here.” That's not true! We don't have a Christ-likeness – we have a Christness. Got it?

Now we're at the point where we're ready to conclude this discussion. However, I want to ask you a question: If we have a Christness, what should we do about it? You need to use your Christness in the same way Jesus used his.

Reverand Tom Wright is an associate pastor at the First United Methodist Church in Geneseo, Illinois. He is concerned that believers are missing the essence of Christianity. Most believers feel a separation between themselves and Jesus Christ. Jesus is divine and they are not, so they feel that Jesus is “over there” and they are “over here”. As a result, there is no intimacy, no relationship with Christ. With that mindset, modern day Christianity is experiencing a power shortage, limping along in dry intellectualism.

Rev. Wright’s book paints a different picture. Believers have a Christness—an intersection where there is no difference between themselves and Christ. Scriptures describing Christness are found in virtually every chapter in the New Testament. Wright challenges believers to use their Christness as Jesus used His.

The concept of Christness liberates believers from the practice of passively listening to sermons Sunday after Sunday. They will now become capable of leaving the bleachers, stepping onto the playing field, and getting into the game.

The revolutionary insight of Christness causes Rev. Wright to ask believers to stop making excuses and become what they were created to be.

Jesus describes it in John 14:12; “Verily, verily, I say to you, He that believeth on me, the works that I do shall he do also; and greater works than these shall he do, because I go to the Father.”

Rev. Tom Wright is an accomplished speaker for investment and Christian audiences. He has developed a course-of-instruction called Soul Searching which enables students to discover God’s purpose for their lives. This course has been successfully taught in academia prior to his entering the ministry. (For details, see his website: Tomthesoulcoach.com).

The thesis of this book is that Believers have a Christness: something identical between Jesus Christ and themselves – not simply Christ-like, as so many writers claim.

The book comes to the astonishing conclusion that, “Jesus' Stuff and Our Stuff is the Same Stuff!” What a revolutionary insight this is. Everything changes. Christianity is turned upside down!

This book deals with being rather than conduct. Believers are exhausted and burned out over conduct issues. People are asking, “Is there anything fresh and exciting in Christianity?” The answer is, “Yes, it's you walking in your Christness!”