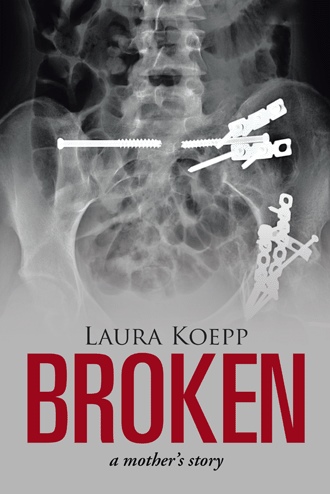 The snowstorm was horrible. I couldn’t see anything in front of me; I couldn’t drive any faster than twenty miles per hour, and there were snowdrifts everywhere. I couldn’t see where the sides of the roads were to make sure I was actually driving on them. It was so scary, but I could not get there fast enough! Every second seemed like forever. I prayed to God the whole time to keep Cassy alive. I finally arrived near the area of the accident and thought that I would ask the people at the roadblock for sure where Cassy had been transported. I pulled over and saw one of Cassy’s coaches, who immediately radioed the crew down the road to find out what hospital Cassy went to and to see if Pete was still there or had followed the ambulance. She told me after a minute that Cassy had been taken to Strong Memorial Hospital in Rochester and that Pete was coming to get me. She told me to pull the van over on the road and leave it there, that they would get it home for us later so we could get to the hospital. That’s exactly what I did. With the key in the ignition, I ran out of the van and into Pete’s truck as soon as he reached me. He was trying to tell me that she was on the way to the hospital, but he was in total shock. He wasn’t himself. He was talking, but he sounded different than usual. His eyes were huge, it seemed, and his face was filled with fear. All I could get out was, “Let’s go. We have to get to the hospital!” Then I asked, “Did you see her? Is she okay?” He told me they wouldn’t let him see her in the ambulance. He had tried to fight his way to her, but people were grabbing and stopping him, holding him back. Pete stopped the truck on the road, and we jumped out to see if Cassy’s ambulance had left yet. There were people everywhere—troopers, deputies, EMTs, firefighters, all the first responders. It was overwhelming to see all of this going on without knowing how bad her injuries were or if she was going to make it at this point. All of a sudden, as we were walking toward the front of the truck, many people separated and into my line of view came the crushed car. I totally lost it! I screamed and cried in utter horror. All I thought at that moment was, How did my daughter come out of that wreck? I couldn’t stand up; my legs fumbled out from underneath me and I fell on top of another car parked on the side of the road to hold myself up. It felt like my spirit and soul, all of my being, were just ripped away. I couldn’t breathe. My whole body was shaking. I couldn’t think—I had no words. I just felt sheer terror for my daughter’s life and complete disbelief that this could be happening to her. It was like my body and mind were completely torn apart. Nothing at this moment made sense—nothing. How could this have happened to her? I knew she had to be crushed from the looks of that wreck. This intensified the panic and anxiety. I just had to get to her and see her as quickly as possible. Pete grabbed me to pick me up. As we both sobbed, he hugged me tightly and told me that I couldn’t fall apart; I had to hold it together. We knew we had to hurry to the hospital, but we were both too distraught to drive safely in such bad weather. Our neighbor friend, who was also an EMT on the scene, also knew we couldn’t drive there, so she assigned a very kind, young fireman to drive us to the hospital. The longest ride of our entire lives had just started. He couldn’t have driven us there fast enough, but it seemed like it took forever. I sat in the back seat, and Pete sat up front with him. Somehow, having a stranger with us at this very tragic time helped us to stay calmer. Pete and I started to make quick phone calls to family and close friends to tell them that Cassy had been in a horrible accident. Every call was about the same; we told everyone to please pray for her, that this was very serious. In between the phone calls, I was praying, almost chanting the same thing over and over and over. I could not stop. Our only lifeline is God! I knew this. We had to fully believe, putting all our faith and trust in God that He would save our daughter. He is the one in control of it all! I prayed for Him to guide the EMTs working on her and help them to keep her alive and to get her to the hospital where the doctors could find out all of her injuries and work to save her. After a full hour of driving in dangerous weather, we finally got to the hospital, where the fireman let us out at the emergency room door. We rushed inside in search for Cassy, our hearts pounding with fear and anxiety about the news we might hear. At first, they couldn’t find her in the computer system. I started yelling, “We know she’s here! She was brought by ambulance!” After a few minutes, a lady came out and directed us to a private room, where she informed us that Cassy was in a full-body CT scan at the moment so they could assess her injuries. Praise God! I thought. She is here, and she is still alive! Thank you, Lord Jesus! We were just so relieved to know that she was alive, breathing, and in the CT scan.

Broken is an emotionally driven rollercoaster of ups and downs of the countless struggles they endured. This raw testimonial will inspire you to never give up, no matter what adversities you are facing.

Relive a mother’s painful experience as she picks up the pieces of their lives through hope, faith, and trust in God!

Laura Koepp is a wife, mother, and naturopathic doctor. She maintains a private practice, guiding others on the path to wellness. She has taught many classes and served as a speaker at numerous events. Laura resides in Darien, New York, with her wonderful husband and their two beautiful daughters.