by Bryan A. Williams 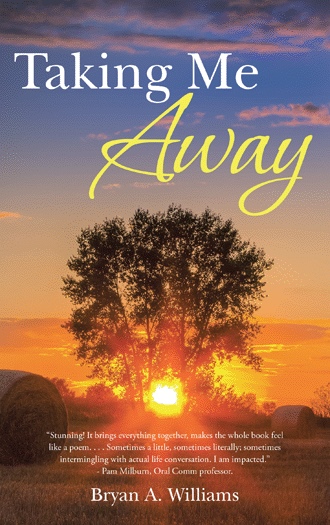 He was in a rustic cottage off the bank of the river.  The bedroom was empty and as he poked the cedar fire, memories danced in the flickering light as the hint of the burning, blue flame permeated in his soul.  It had been over five years since it had all begun and he could recall the detail of the first feeling that set it all in motion.  It was strange even to him how it was so clear.  A spark popped and his eyes grew intense for a moment; as though it had awakened every sense for the same rise and fall as the spark itself. . . but sending him back to the beginning.  They eventually lulled over into mist, as often happens when one goes into a deep and sudden retrospective state-of-mind.  It was late at night before the first day back to school after the spring break.  As he lay awake, he contemplated a bottle of whiskey that had not been touched since his eighteenth birthday a month before.  A part of himself sent out a warning to leave it alone.  However, the reality of the first day back, the people he would see-- it seemed to make the reality of the world he lived in unbearable without it.  He got out of his bed and walked into the closet.  Hidden inside a light brown, lined-leather-jacket that he hardly wore was the bottle.  The intention was to have just enough to relax, to get his mind off things and he thought with one swig that it would be enough.  But he had no reaction to the bitter first taste as the details began to flash in his mind of what the next day could entail and as sure as a reflex. . . he tipped the bottle back again, gulping the aged whiskey like a cast away adrift at sea would gulp water after days of being cooked by the sun.  A good three shots from the fifth was gone in that last swig, not counting the one before.  Shortly after, his despair began to really set in.  He knelt to the floor with a hand holding the top of his head trying to fight back the tears, but there are times when that can't be done.  As he cried, it was graceful; the muscles in his face hardened, the look in his hazel eyes was rare and he looked in the mirror on the closet side of the door to imagine what would happen if she saw this brokenness in him.  He found himself both captivated and terrified at the thought of her knowing how he really felt.  Before the buzz hit him he put the bottle back and said in a calm, yet shaky voice, "Not another drop."  He was one who would listen to these absolution's.

A slow start; that is all Tristan Waters wanted. A midst graduating from high school and earning a full ride to the University of Arkansas, he was faced with first love and the adversity of a crumbling family. In the last few months before college started, he and Onise Taylor were dedicated to finding the things they would fight to hold onto as well as remembering the things of which they must ultimately let go of.

Hello, my name is Bryan A. Williams, and I do wish that there were some credentials -- such as college courses in writing, news paper pieces, or anything that would give off the impression of being qualified to write the book that I did write. . . but there isn’t anything like that to my name.  I began writing when I was almost twenty-years-old, and I’m twenty-five now. This is my first book, and the real reason I felt qualified, or inspired to write it is due to what has happened in my life in these past few years.  To be honest, this is the only story I was qualified to write, and it’s because of how loosely it was based around my own life.  The story takes place in my hometown of Conway, AR, and the most significant theme is the affects of divorce on kids whose parents split after they’re grown.