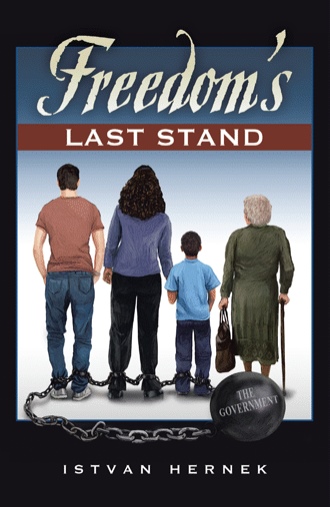 I have written this chapter with the hope that the reader, by getting familiar with the road I have traveled, will have a better understanding of how I arrived at the conclusions I present in this book. I had experienced tyranny, both in the form of Fascism and Communism. To me, those systems were not academic excursions within my brain. I lived them! Experience is a great teacher and a hard taskmaster. It does not allow social promotion as it is practiced in some of our schools. In the school of experience, you must have a passing grade to survive.

I invite you to accompany me on a journey of ideas, facts and cause-and-effect relationships. Let your own logic, life experience and heart determine whether what I have written makes sense and, perhaps, provide some direction toward “retaking” our beloved country. Search your soul and find out what Liberty means to you, your children, and your grandchildren. Keep in mind that ignorance is Liberty’s death toll. Believe me, there is no hunger more painful that the hunger for Liberty……and nothing is more bitter than the aftertaste of Liberty that was lost!

You may find my story interesting or enlightening, or perhaps you will agree with the college professor I met who remarked that my experiences “distorted” my thinking.

Considering his complete lack of understanding of the undeniable and necessary relationship between theory and experience, I was compelled to ask him if he would prefer heart surgery be performed on him by a doctor who had previously done hundreds of them, or by someone who had only read books about it. He was lost for an answer. Perhaps his conviction or way of “unthinking” illuminates the problem with some of our institutions of higher education.

We must be fully aware that Liberty is constantly under attack everywhere. Tyrants worry about freedom because it is like a magnet. People are drawn to it. The reason for the Berlin Wall was to prevent people from escaping and running to what President Reagan called “The Shining City on a Hill,” - to America, to freedom. It was that very desire, the desire to be free that brought me here. I am an American by choice, not by chance. I came here in search of Liberty!

I was born in April, 1935, in Pusztakengyel, Hungary. Pusztakengyel was a small village far away from the hustle and bustle of the big cities. My father was the equipment manager for a large landholder. He was in charge of all the tractors, steam engines, and just about everything that had moving parts.

For a little boy who was fascinated by machines, it was like Disneyland. I went along for many rides on steam engines as they were plowing the fields; and I will never forget the combined smell of burning coal, steam and oil. You may ask any steam engine enthusiast and he will tell you he cherishes that smell!

My parents worked very hard. They bought some land and saved enough money to purchase the equipment needed to start an agricultural contracting business. However, the Second World War created a great deal of uncertainty and they decided to keep their money in the bank, waiting for things to settle down before investing in a new business venture.

I spent most of my summers with my grandmother. Her home was located near railroad tracks, which were busy carrying German soldiers to the Eastern Front. By this time in the war, they were all young, barely having peach fuzz on their faces, probably wondering if they were ever going to ride a train heading west towards home. These were not Nazis, not quite children, not quite men caught up in the meat grinder of a horrible war.

We ran alongside the train asking for candy and, almost without fail, they would throw us some, probably from the stash their mothers gave them as they boarded those trains, heading towards uncertainty.

By this time, American Bombers were daily visitors aiming to destroy the railroad bridge not far from us. They appeared to be tiny silver dots in the air surrounded by puffs of white smoke, like so many wolves among sheep. Some of the shiny dots began to belch smoke and soon a few parachutes would appear. Those were the lucky ones. Most of the crews crashed to Earth in their burning planes. To me, it all seemed like exciting theater. Being a young child, I could not imagine what may have gone on in the heads of those dangling from parachutes, or the ones desperately trying to get out of the burning planes, or the unwilling passengers riding trains toward blazing guns and exploding mines. I did not realize at the time that I would soon become an actor in this miserable undertaking.

My family and I moved to Budapest. My father began to work for a manufacturing company and my mother became the manager of an apartment building. Sometime after our arrival, the Hungarian government attempted to pull out of the war through secret negotiations with the West and the Russians. The negotiations failed. When the Germans got wind of it, they invaded Hungary and installed the Arrow Cross Party to rule our country. The Arrow Cross Party was the Hungarian equivalent of the Nazis.

A man in our apartment building immediately joined their ranks and swaggered around with his Arrow Cross armband “keeping an eye” on the Jews.

Soon, harassment of the Jews began. First, they were forced to wear a yellow Star of David on their clothes in order to be “identified” wherever they went. Shortly after that, they were evicted from their homes and were forced into communal homes. Everything they owned was taken from them and, having very few if any opportunities to make a living, starvation began lurking at their doors.

Silver-medalist Olympian Istvan Hernek shares his wisdom with the children and grandchildren of the United States. Through the joys and perils of his early childhood in Hungary to his last days here, free, in America, he tells us the importance of safeguarding our freedoms by being diligent and aware. This is the story of a true patriot who knows what it’s like to lose freedom, but also how wonderful it is to get it back. Defecting here after the Melbourne Olympics, Istvan writes about the struggles our great nation has gone through and is going through, and how the possibility that the United States was going to make the same mistakes his homeland, Hungary, did worried him. All through the eyes of one who has seen the horrors of communism and also seen the endless opportunities of freedom, listen as Istvan clearly and unbiasedly explains many difficult problems of today. His ideas and views have come from his many extraordinary experiences and his very deep intellectual thinking. Istvan was a dear husband, father, grandfather, and true American in every aspect of the word. His wish is to share with you his knowledge to help keep this country great.

Istvan Hernek came to the United States on December 24, 1956, burdened with the sorrow of leaving his loving family and his country, which was once again under siege. It was a sad Christmas; however, he had great hope for his life in this great country. His vision was on freedom. A silver medalist in canoeing in the 1956 Olympics in Melbourne, Australia, he coached a kayaking team in Akron, Ohio, where he met his wife, Mary Ann. He worked as a mechanical engineer for many years before running a family business in Michigan. Today he leaves behind a great legacy: his wife, Mary Ann, three children, nine grandchildren, and six great-grandchildren. His love for his family was only equaled by his love for freedom. While his children and grandchildren were growing up, the most important lesson he impressed upon them was to never take freedom for granted. We live in a great country, and everyone’s duty is to make sure that it remained free, no matter the costs. Istvan was an immigrant who showed overflowing patriotism for the country that became his safehaven and home, the country where he started his family, the country where he lived and died. His novel leaves behind his story and his words of advice to America. Will you listen?