A Life of Deep Communion with God 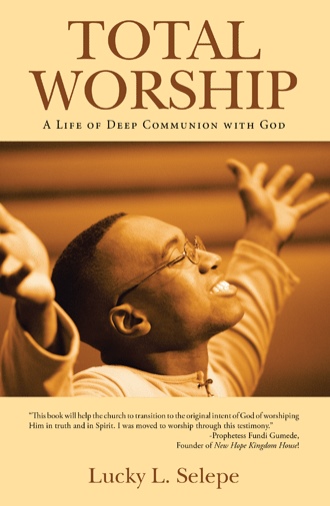 Lucky Selepe expounds the valiant power of worship and how you can voluntarily provoke the active presence of God, even during overwhelmingly stressful situations. He goes beyond worship in song and outlines significant elements and practical examples of acts of worship. He shows how worship is the deepest level of communion with God.

In Total Worship, you can

§ Learn how to create an atmosphere of worship; § See the invisible God; § Learn how you can practice the presence of God; § Understand how you were designed to worship; § and much more.

Lucky Selepe is a founder and presiding pastor of Ancient Rock Ministries. He earned an honorable BA in psychology from the University of Limpopo, and he further trained with the International School of Ministry and Heritage at Faith Bible Institute.

He experienced a turnaround in his faith one midnight when, while he was worshiping God alone, he was baptized in the Holy Spirit. This experience took place after three years of attempts to be baptized—through the laying on of hands by ministers—to no avail. It was through this experience that he was changed into another man and discovered the dynamic power of true biblical worship. He believes that every Christian can be transformed into a valiant believer. Through personal testimonies and revelations, he inspires other believers beyond the borders of South Africa to personally experience God. He has the grace to accurately interpret Scripture and simplify deep revelations. He is an excellent teacher and preacher of the Gospel, and he enjoys guiding his audience to experience the presence of God.

Though he had a successful career, he eventually answered the call to minister full-time. He continues to be graced by experiencing God and sharing this wonder with others.