An Angel Lost Its Feather

by Irene A. Vaden 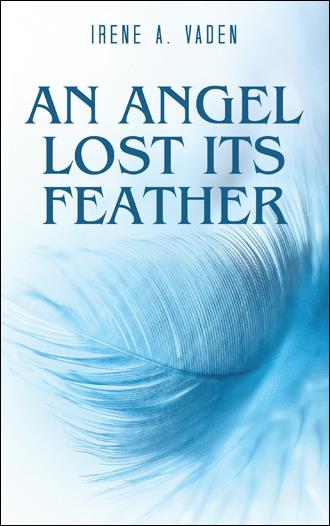 Children are at Bess’s tea party she was having: They wanted Timothy to enjoy it elegance.

Once an extra chair was found, Timothy sat gentlemanly-still amid the elegance long enough to be poured lemonade and be served both sandwich and cookies. Bess and Faith wanted him to admire the table setting, but that was taking it too far, “yeah,” he munched and talked between sandwich and cookies, then choosing more for his plate.

“Maybe,” he munched quickly and was going to exit the bedroom as fast as he could, but a rumble came to their room; the angel, Power, appeared.

All three children gasped, shocked to statute stillness and gaped at the grand figure before them.

Faith sat blinking and staring in surprise, “You came to me,” she gasped and glanced with a mixture of awe and self-satisfaction toward Bess and Timothy; then back to her handsome angel. She was both pleased and surprised beyond her wildest dreams.

Power remained in one spot, looking about the room and seemed to size everything up with superiority. He was a mighty angel and quite majestic: Tall, handsome, stately, and he wore a lavender robe. He carried an armful of lavender flowers that appeared to have long stems like long-stemmed roses which caused the arrangement to look gloriously grand. The scent of the lavender filled the bedroom and its scent overwhelmed the room.

Power nodded as he moved with great sovereignty toward Bess, who sat in rigid surprise, and Power placed the flowers on the table before her. His eyes shone with simplicity and pleasure at Bess: then he disappeared.

Faith dived for the flowers, “Look what my angel brought to me,” she was radiant and possessed with infatuation.

“Nooo, I don’t think so,” Bess breathed deeply, “those flowers were meant for me. Did you not see him lay the bouquet where I am sitting?”

“I did,” Timothy looked hypnotized.

“You don’t understand,” began Bess but was interrupted by the presence of Victory.

Once again the children were spell bound to have another angel in their room and once again showed the same surprise as when Power was present. All three witnessed the presence together.

“Power has chosen a victor, who is Bess,” that angel announced to no one in particular.

“That’s not true. My angel loves me,” Faith froze, “those flowers were meant for me.”

“Angels love who they will, but I will be your friend,” Victory looked sympathetic toward Fath. I like you a lot. You need not fret about such celestial adoration.

Faith shoot her head no and started to weep. Her heart felt broken over Power’s behavior. She would not accept that her angel no longer loved her. She looked at her friend, Bess, with the most pitiful and hurt eyes Bess had even seen from her friend.

“You leave my friend alone,” Bess glared at Victory, who had disguised herself earlier as Power. “You’re a deceiver, you, you.”

“Really?” Victory said sweetly, “As I recall, you desired this Blue Willow china set, and you asked me to help you to get it. Not to mention, you wanted to win Power over so Faith wouldn’t like him anymore, and you could be the winner all the way around.

Victory’s face turned mean. “YOU, selfishly asked me to help you win so YOU could be all victorious,” that angel laughed derisively toward Faith.

“Liar,” gasped Bess. She picked up her tea pot and flung it at Victory, who drew its sword.

All three children gasped in horror.

“Leave my sister alone,” Timothy leveled his voice evenly toward Victory so as not to alarm her further. His knees shook and his twelve year old voice quavered, and then he stood up to stand his ground. He held fast to the edge of the table for support and he waited for the first attack.

Angels are ever popular. Angels are more prevalent today People dream and talk of angels. How fun. How energizing. How fantasizing, how real. Some see angels. Some don’t. We know they are important. Our expectations are high. Some people will confess they saw an angel and expound on it. Others try not to think about it in fear.

This story plays out the role of three children who delve into angels thinking they will get an angel of their own, and they instead get into real trouble. How dare they. Jealousy being a main factor because they want an angel of their own. books are studied by the children and playing out the part on contact. Alas. They can’t get out of what they are doing.

Learning the hard way, changes come into their lives.

Irene Vaden was born in Sitka, Alaska and has lived there all her life and did not leave Sitka until she was nineteen. She is Tlingit of the Multiplying Wolf House. Her Moiety is Wolf and Irene is a loner in a structural way. She still lives in Sitka.