How a Jewish Girl Went From Wondering to … 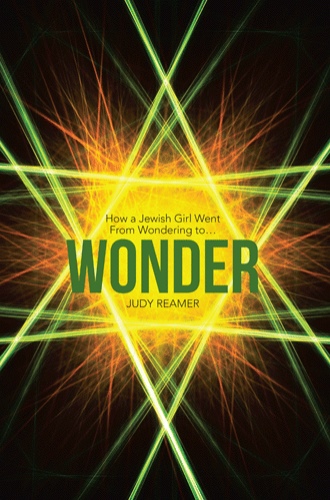 Maybe you’ve heard of the Wandering Jew. That’s not me, but I have always been a full-blown wondering Jew.

My Russian great-grandfather Becker lived upstairs in our home. About the only thing Grandpa Becker and I had in common was that we were both very thin. Over and over again I heard the familiar Jewish lecture: “Eat! Eat something! You look like a string bean! Don’t you know there are children in China who are starving?” I thought, Why push me to eat? Grandpa’s nearly one hundred. Being thin hasn't killed him!

I often wondered about my Grandpa Becker. He was a mystery to me. A frail man, he stayed all day in his room, wearing a yarmulke (a black cap worn by devout Jewish men), rocking back and forth in his chair, and muttering to himself. One day I got brave enough to ask him a question. “Grandpa, what did you do in Russia?”

He was silent for a long time. Eventually he answered me.

After another pause, he added, “People would fight there. Sometimes they would shoot guns.”

Abruptly he went back to rocking and muttering. I could tell the conversation was over. I left his room, wondering what a saloon was. I returned the next day, to try talking with him again.

“Grandpa, what are you doing?”

“What are you saying?”

“What does it mean?”

Grandpa was very quiet. Finally he said, “I don’t know. I am not sure what I’m saying, but I have committed Hebrew prayers to memory.”

“Well then, Grandpa, why are you doing it?”

He stared at me. Then came the answer that my “Why?” questions always seemed to bring forth.

Later that evening I asked my mother, “Why does Grandpa pray like that?” Mother explained that what Grandpa did was called davening. He was reciting old Hebrew prayers. They were prayers he had memorized phonetically when he was much younger. Now in his old age, people would pay him to say these prayers for them.

Children absorb a lot by osmosis. I absorbed the expression “Because we’re Jewish” as a way of explaining to myself why we did what we did. When I was growing up, the one thing I never ever wondered about was God. I heard the word “God” mentioned in Sunday School, but Esther and Joseph were much more interesting, because I could visualize them. My thick coloring books had pictures of Daniel in the lion’s den, Noah building the ark, and Moses leading the people across the Red Sea. The Old Testament characters were fascinating. I heard the stories over and over until I knew them well. But none of this gave me the idea that God had anything to do with my real world. He seemed so impersonal—always too big, too high up, and too distant in every sense.

My impression of God was akin to the chandelier hanging in my friend Barbara’s dining room. She and I would be engrossed in conversation, ignoring and not caring about the light above our heads. Did we know there was a chandelier up there? Certainly. How else could we see each other or the lean corned beef on rye sandwiches?

So if you asked whether I thought there was a God, I’d have answered yes, just as I would have figured there was a chandelier over the table. I never stopped to appreciate the bright light (or God) and in fact never thought one thing about it (or God).

I honestly didn’t care about this invisible person, but I definitely knew his name and used it daily—the same way everyone around me did—in vain. I heard people swear by his name and use it in many other situations that violated one of the Ten Commandments . . . which I did not know as a young person. “You are not to use lightly the name of ADONAI your God, because ADONAI will not leave unpunished someone who uses his name lightly” (CJB).

Not once did I feel shame for using God’s name in this manner. Nor did I suspect that anyone else felt bad either. As a child in Sunday school, I had learned to write the word “God” as “G-d.” I, the child-wonderer, didn’t understand why God was too holy to have his name spelled out, but not holy enough for us to refrain from using his name freely when we were frustrated or angry.

In many ways, my life was the same as that of any young person, Jewish or Gentile. I loved to read, I loved going to movies, and—after the giant mahogany wonder arrived in our living room—I loved watching television.

The glamorous men and women I saw on the screen became my idols. The Crayolas fell by the wayside as my fingers became busy turning the pages of Hollywood monthlies.

I spent many hours pondering how to become a movie star, or perhaps a classical ballerina. I persuaded my mother to let me take ballet lessons, but that proved a disaster, so I settled for tap-dancing. Blue-eyed Ginger Rogers and slender Fred Astaire, dancing stars of dazzling musicals, were my mentors. (This was free of charge since they didn’t know it.) I, too, was blue-eyed and slender, so I figured that would give me an edge in my career.

Although my black patent leather tap shoes hitting the linoleum kitchen floor brought out my star quality, it also brought out the worst in my daddy. He’d scream, “If you must tap, go tap your fingers on a table!”

I would yell back, “All right, I will. I’ll do both. I’ll tap on the floor and tap on the table at the same time! Thanks for the idea!”

Then I would tap out the front door and into the night air to avoid being killed.

Experience the humor, heartbreak, and elation of this riveting narrative about Judy Reamer, whose curious mind took her into surprising places and uncharted waters. A book, a trip to Las Vegas, and a worldwide entertainer were all instrumental in moving this independent Jewish Philadelphian beyond her self-centered world. Wired to wonder, Judy ultimately found herself wired for wonders when her dramatically changing worldview led to repeated encounters with God’s supernatural work.

Judy’s story will take you through her escape from the heavy hand of the cults and the strong arm of the turbulent USSR, an unjust courtroom outcome, and her husband’s untimely death. But most remarkable of all, you’ll see what happened when this “wondering Jew” met the most famous man of all ages, born across the sea. Life was never the same. Nor was it boring. Oy!

“Wait till you read this story about my great friend Judy. Her writing style is remarkably simple, but her story is simply remarkable.”

“Judy’s story has much to teach, and because of my Jewish background, it resonated profoundly. I love her, and you will too.”

Judy Reamer is the author of several books, including best selling Feelings Women Rarely Share (revised edition) and The Parable of the Shoes. Because of her wry sense of humor and powerful treatment of up-close and personal topics, Judy is a popular speaker and talk-show guest. A widow with grown children, she resides in Atlanta, Georgia.