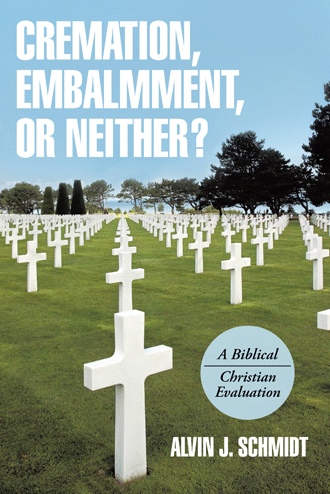 Why have many pagan societies for thousands of years cremated their deceased human bodies?  Why did the Jews throughout the Old Testament era consistently oppose and reject cremation?  Why did the early Christians in Rome and their descendants, similar to their Jewish ancestors, also oppose, repudiate, and spurn cremation until the mid-twentieth century?  Why are so many Christians and Jews today in the West incinerating their loves, including themselves?  Has the philosophy of Enlightenment from the seventeenth and eighteenth centuries that spawned pervasive secularism influenced Christians to accept cremation, a method highly favored and advocated by secularists since the nineteenth century?

Also, why do so many Christians, especially in North America, presently embalm their deceased relatives and friends, a practice that has no biblical support?  Is embalming the dead an unrecognized way of denying the reality of death, even by many biblically minded Christians?

This book, Cremation, Embalmment, or Neither? A Biblical/Christian Evaluation, written in non-technical language by Dr. Alvin J. Schmidt, a sociologist and Christian theologian, provides answers to the above questions.  The book reflects in-depth, extensive research drawn from numerous biblical and historical sources, ancient and modern.  Previous to this book, the above questions have not been asked or addressed from a biblical perspective in any theological or historical studies by any Christian denomination.   Most Christian denominations, highly influenced by secular culture, have simply gone along with the cultural flow, so to speak.  The theological questions of many devout Christians have not received biblically based answers.

Thus, readers, especially Christians, will benefit greatly by reading this book, as it provides biblically derived information for those who at some time have wondered whether cremation or embalmment is acceptable for them when the time comes for them to leave this “vale of tears” for eternity.  Non-Christians who have an interest in history, and have questions of their own, will also find this book interesting and valuable.

This book documents today’s rising rates of cremation in the West, and notes that these rates now include many deceased Christians, a stark contrast to Christians in the past who had consistently rejected cremation from their earliest years in pagan Rome to the mid-1960s. Christians opposed and spurned cremation for a number of reasons, discussed in this book. By mid-fourth century, Christianity’s rejection of cremation influenced pagan Rome to abandon cremation. Earth burial became the only acceptable way to dispose of deceased humans, resulting in a major cultural change in the West. Converts to Christianity had to promise they would never be cremated. Graveyards were named coemeteria, Latin for where dead people “sleep;” from which we get the word “cemetery,” a name now contradicted by cremation.

This book is a clarion call to Christians. Dr. Schmidt has amassed historical, biblical, theological, and practical evidences that the modern Christian church will only refuse to hear to its great loss, both now and at the judgment Seat of Christ where we each shall receive what is due to for things done “while in (might we add “to”) the body” (2 Corinthians 5:10).

This powerful apologetic clearly establishes that cremation fails to find endorsement in the inspired Holy Scriptures. Dr. Schmidt’s research will prove invaluable for those who might query the need for burial rather than cremation. Hopefully, this book will have a wide influence on Christian thought and practice.

NSW, Australia.  Author of Burial or Cremation: Does It Matter?

I heartily recommend Dr. Schmidt’s excellent book Cremation, Embalmment, or Neither?A Biblical/Christian Evaluation to clergy and faithful laypeople alike concerned with the increasing rates of cremation among Christians. This will be in keeping with the Apostle Paul’s admonition: “Do not conform any longer to the pattern of the world” (Romans 12:2).

This book provides an excellent opportunity for Christians to engage in deep theological thought regarding end of life decisions.  Dr. Schmidt has thoroughly documented the historical roots for Christian burial.  A must read for all Christians.

Alvin J. Schmidt is an internationally known author. Two of his books are in foreign languages, one in seven languages; two received national awards. As emeritus professor of sociology at Illinois College, Jacksonville, Illinois, he holds BA, MDiv, MA, and PhD degrees and is a fellow in the Society for the Scientific Study of Religion.