A Timekeeping Tool for the Church of Tomorrow 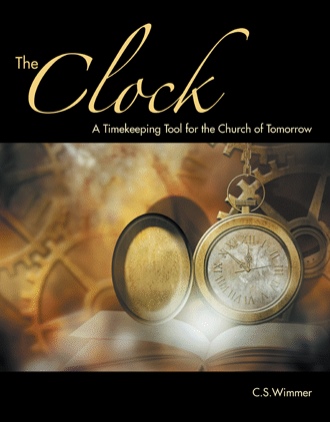 Presently, humanity is traveling on this journey through time with an awareness of one clock. The 24-hour clock is a human invention based on the rotation of the earth and its relationship with other celestial bodies. The 24-hour clock governs daily life in increments of seconds, minutes, and hours. It is a clever invention—one that the human spirit simultaneously embraces as its master, its dictator, its friend, and its foe. We can’t live without our clock, or at least that’s what we’ve come to believe.

Armed with a one-clock perspective of time, the Christian church perceives herself as having a 2,000 year-old history, beginning with the life and times of Jesus. However, the church acknowledges a sisterhood with Judaism, which perceives her spiritual history to be about 6,000 years old. The Clock, revealed in this book, will allow Jews and Christians to travel farther back in time, which is necessary if we want to develop a healthy theology of time. Both faith traditions must widen their shared spiritual lens in order to consider the concept of time before measured time—a time when humans had no clock.

To gain the biggest possible picture of time, people of faith must return to the point at which the thought of God first entered human consciousness. We might imagine this point in time coinciding with the creation of the image and likeness of God in Genesis 1:26—the Imago Dei. Following the awakening of a spiritual connection with our Creator, humankind would have begun to work the earth and experiment with intentional planting of seed.

Our museums of natural history suggest that semi-permanent agricultural communities began to form around 12,000 years ago. However, the earliest known calendars emerged only 6,000+ years ago. Therefore, the earliest attempts to plant and manage gardens would have taken place long before measured time. Nevertheless, humanity’s desire to become more knowledgeable gardeners certainly would have encouraged the desire to measure the passage of time.

As people of faith, we could benefit from perceiving life on earth before Scripture was written, before sacred story was inspired, before language was developed, before cultures and hierarchal systems were established, and before time was measured. Such perception would allow us to realize that our one-clock perspective of time hinders the human spirit in ways we may not recognize.

That being said, the Hebrew Bible and the Greek New Testament do contain two statements about time which point to two different perceptions of time. Both statements seem to contradict each other, but the contradiction reveals a truth upon which a healthy theology of time can actually be developed.

“No one knows about that day or hour, not even the angels in heaven, nor the Son, but only the Father. Be on guard! Be alert! You do not know when that time will come. It’s like a man going away: He leaves his house and puts his servants in charge, each with their assigned task, and tells the one at the door to keep watch. Therefore keep watch because you do not know when the owner of the house will come back—whether in the evening, or at midnight, or when the rooster crows, or at dawn. If he comes suddenly, do not let him find you sleeping. What I say to you, I say to everyone: ‘Watch!’” Mark 13:32-37.

Did Isaiah hear God’s voice declare that the end is knowable, while Jesus declares that the day and hour are unknowable? Yes. The two statements do seem to contradict each other. Yet, both statements are true when viewed from two different perspectives of time on two separate clocks.

According to humanity’s 24-hour clock, the day or the hour will never help humans determine the particular end to which Jesus referred. Therefore, Jesus’ words are accurate. Yet, Isaiah’s words are also true. The Clock imparted within this book will make known the end from the beginning. However, thinking about time from the perspective of two different clocks has not been part of our spiritual awareness.

Unlike humanity’s 24-hour clock, The Clock that emerges from the text of Genesis 1 is not associated with the rotation of the earth or the position of celestial bodies. Ancient and present cosmological thinking plays no role in the development of the timekeeping tool revealed in Genesis 1. Therefore, the difference between Ancient Near Eastern cosmology and present cosmology is irrelevant to the discussion of time within this book.

Our Present Understandings about Genesis 1 Because The Clock originates with Genesis 1, it might be helpful to consider our present understanding about this text. Some scholars agree that this account originated between 800 and 500 BCE—a time span of 300 years. A small number of scholars insist on a much earlier date, arguing that the account of Creation originated as an oral story during the days of Moses, circa 1400 BCE, or the Middle Bronze Age. Still others would say that its origin is unknown.

Some scholars would say that the origin of Genesis 1 isn’t important because the story was revised several times before it reached its final form in the Pentateuch—the first five books of the Bible. The latter argument would send scholars into an entirely new realm of disagreement because the actual dating of the Pentateuch is also debated.

Does the origin of Genesis 1 matter? No! Not for the spiritual perspective outlined in this book. The only thing that matters is that the text, regardless of when or how it originated, was written by a person, or several people, who served within the Jerusalem priesthood—the priestly tradition in Israelite society. Scholars call this person, or persons, the P source.

While the origin of Genesis 1 is not part of the spiritual perspective outlined in this book, our present beliefs about the account of Creation do matter. Opinions cause people to accept or reject any discussion of Genesis 1 that does not reflect their views. Because people hold strong feelings about this text, it is important to confront our thoughts and deal with them before launching into the text of Genesis 1.

Some people argue for a literal interpretation of Genesis 1, which promotes a 24-hour understanding of the text. Such opinions are based on a one-clock perspective of time. Since humanity’s 24-hour clock is our only known measurement of time, it is assumed that the writers of Genesis 1 had the 24-hour clock in mind when the account of Creation was written. It is an assumption we may want to question.

God’s voice whispers through the words of the prophet, Isaiah, “I make known the end from the beginning, from ancient times, what is still to come.”

When warning his disciples about heaven and earth passing away, Jesus said, “No one knows about that day or hour, not even the angels in heaven, nor the Son, but only the Father. Be on guard! Be alert! You do not know when that time will come.” Mark 13:32-33 NIV

Are we to believe that God makes known the end from the beginning? Or, should we believe that the day and the hour are unknowable?

In truth, these seemingly contradictory verses in Scripture are equally believable when time is viewed on two different clocks. To date, however, humankind has relied solely on the 24-hour clock that secured residence within the human mind more than 8,000 years ago. Humanity’s one-clock perspective of time is entirely useless in determining spiritual beginnings and endings. Yet, a different perspective emerges from the text of Genesis 1 which does, in fact, make known the end from the beginning.

The Clock, revealed within the pages of this book, will help the human spirit develop a healthy theology of time—and not a moment too soon! Through the lens of light, color, and image, The Clock’s colorful face revisits the past, identifies the present, and makes known the future while orienting the human mind on its journey through time.

If Jews and Christians desire additional insight into our shared spiritual beginnings, we must discover The Clock in Genesis 1 and embrace a two-clock perspective of time. Once aware of a second timekeeping option, the mystery surrounding many end-times scenarios will be removed—enabling us to travel together with confidence into our projected future.

It’s time to understand the times!

After twenty-two years of church ministry, as a director of music, art and theater, Ms. Wimmer sensed a call to remove herself from church leadership. In 1995, she resigned from the music ministry and waited for direction. Shortly thereafter, from 1996 to 2000, Ms. Wimmer experienced an intense time of spiritual instruction. The inspired insights opened the door to fresh theological perspectives in three areas of human concern: Time, Language, and the Organization of God’s people.

Believing that personal insight must be grounded in credible evidence, Ms. Wimmer entered the field of biblical research. From 2004 to 2009, she presented several academic papers at different regional and national meetings of the Society of Biblical Literature.

Ms. Wimmer believes that the kernels of wisdom, poured into her vessel many years ago, are intended to reorient the focus of the church of tomorrow. Therefore, she writes from a visionary and futuristic perspective. She shares her inspired perceptions in an effort to contribute something meaningful to the current dialogue regarding the present shift occurring within the church universal.

Ms. Wimmer lives in Tulsa, OK with her husband of forty-six years. In their free time, she and her husband enjoy gardening, carpentry, interior design, and renovating old or neglected houses. Together, they have two adult children and three grandchildren.