Joey and the "What If" Bubbles 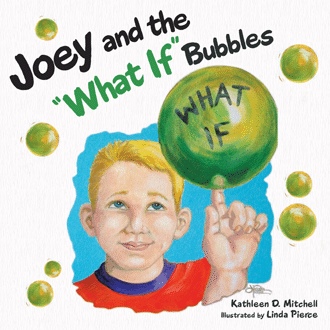 Joey Aiken was like any other adventurous 8 year- old boy. He loved hanging from tree branches and catching frogs in the stream behind his house. He could ride his bicycle backwards around the block, as easily as he could dribble a soccer ball down field to make a score. He loved telling silly jokes, and usually laughed louder than everyone else at the punch line. Everyone in his class at school knew that Joey could burp louder than anyone for miles around. On really hot days he would stuff his mouth with chocolate ice cream until he could feel his brain begin to freeze. Joey was fearless and so much fun … that is, until one day last September. Something strange happened to Joey that day. On September 12th, Joey began to worry. It happened without warning. There he was, confidently sitting at his table in the school lunchroom at high noon; crunching happily on a piece of garlic bread. In the next minute a loud crash was heard echoing throughout the dining hall. A deafening roar of many children laughing hysterically immediately followed that sudden crash, as if a circus clown had just entered the room. Looking around, Joey saw his friend Peter standing in a puddle of milk with spaghetti sauce and noodles splattered all over his feet and legs. Somehow Peter’s tray had slipped out of his hands as he was walking toward the table to join Joey for lunch. Now Peter was standing in the middle of the lunchroom, empty-handed, wearing his lunch all over himself, with everyone staring and laughing at him. His face showed his embarrassment, as his cheeks took on the color of a bright, ripe, tomato. The blush of red on his face actually matched the sauce that now covered his shoes. Somewhere, way down within Joey, there was the tiniest bit of a laugh trying to pop of out of his mouth; but something made it stick there inside his stomach. What was his friend feeling in this moment of unhappy attention? Out of the blue, Joey began to feel queasy in his stomach as a horrifying thought jumped into his mind. “WHAT IF that had been ME instead of Peter? What if I had dropped MY tray and splattered spaghetti everywhere? What if everyone was laughing at ME right now? What if I was the person standing in the middle of the lunchroom with nothing to eat, while noodles hung helplessly from my jeans?” Those were horrifying thoughts for Joey.

(Find out what happens when Joey considers various WHAT Ifs in this world. See how he learns to deal with them successfully. Children love this story, and so will adults. Everyone has WHAT IFs that need to be POPPED!)

Every child wants to fit in and have a carefree life, but every child is challenged with occasional moments of worry and fear. Little things can appear to be very big at times. Worry has a way of building up, and refusing to go away, if it stays locked up in a secret place. In this book, eight-year-old Joey Aiken learns that worry and fear can multiply until they crowd out freedom and joy. He also learns how to get rid of those scary thoughts, as well as the bothersome suggestions they make in our minds.

Joey and the What If Bubbles is a great way to start a dialogue with children about what worries them, and it gives parents tools for helping children cope. In the midst of the sharing, adults just may find that they too have a few “what-ifs” to get rid of.

Kathleen Mitchell is a wife, mother of four, and grandmother of five. She has a master’s degree in public health, specializing in “people building.” As a parenting consultant and lecturer on living in truth and faith, she has traveled the world with her messages of hope.