The Story, the Allegory, the Prophecy, and What Matters 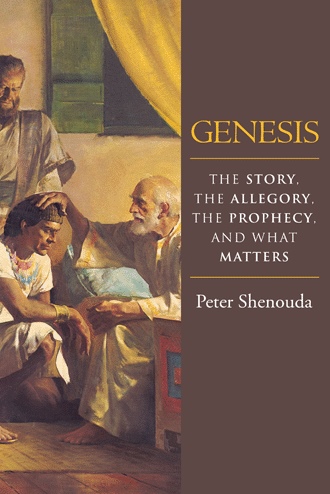 Creating the Sun, the Moon, and the Stars

The lights in the sky—which are the sun, the moon, and the stars—will mark times, days, and years.

God’s creation presents not only space but also time (Gen. 1:5, 14). So God made the moon and the sun. Here moon and sun are not deities, as claimed by early pagan cults (Deut. 4:19; 17:3; Jer. 19:13), but essential timekeepers for nomadic people, and important for God’s people in setting festival times. Darkness, too, is a part of God’s providential ordering. Even at night all life is dependent on the Creator. In this quaint picture from an agrarian society, night is for the beasts and day is for humans to work. This hymn of praise to the Creator sees the human species simply as one of the creatures dependent on God, the Provider. With respect to existence and dependency for life, we are one among many.

You made the moon to mark the seasons,

and the sun knows when to set.

You send the darkness, and it becomes night,

when all the forest animals prowl about.

Then the young lions roar for their prey,

stalking the food provided by God.

At dawn they slink back

into their dens to rest.

Then people go off to their work,

where they labor until evening.

To underscore, the lights in the sky serve as signs to mark sacred times like holidays, days, and years. And a question here was asked: “Why is one day more important than another, when all the daylight in the year is from the sun?” (Sirach 33:7 NRSV).

And we got the answer from these verses:

By the Lord’s wisdom they were distinguished,

and he appointed the different seasons and festivals.

Some days he exalted and hallowed,

and some he made ordinary days.

Again, the lights in the sky serve as signs to mark sacred times, days, and years. How does that work?

From the moon comes the sign for festal days,

a light that wanes when it completes its course.

The new moon, as its name suggests, renews itself;

how marvelous it is in this change,

a beacon to the hosts on high,

shining in the vault of the heavens.

The Scripture directed our attention to looking at the sky looking for the signs of the second coming of Christ and the end of the days. “There will be great earthquakes, famines and pestilences in various places, and fearful events and great signs from heaven (Luke 21:11 NIV, emphasis added).

• “Immediately after the distress of those days ‘the sun will be darkened, and the moon will not give its light; the stars will fall from the sky, and the heavenly bodies will be shaken.’” (Matthew 24:29 NIV, emphasis added)

• “The sun will be turned to darkness and the moon to blood before the coming of the great and glorious day of the Lord.” (Acts 2:20 NIV, emphasis added)

• “I watched as he opened the sixth seal. There was a great earthquake. The sun turned black like sackcloth made of goat hair, the whole moon turned blood red, and the stars in the sky fell to earth.” (Revelation 6:12 NIV, emphasis added)

Jesus rebuked the Pharisees and Sadducees for their ignorance of the signs of his coming, even though they had enough experience of the law and a knowledge of the prophecies that were telling about the coming of the Messiah. Christ was talking live to them, and they didn’t recognize him.

The book tells us that the Pharisees and Sadducees came to Jesus and tested him by asking him to show them a sign from heaven. He replied, “When evening comes, you say, ‘It will be fair weather, for the sky is red,’ and in the morning, ‘Today it will be stormy, for the sky is red and overcast.’ You know how to interpret the appearance of the sky, but you cannot interpret the signs of the times” (Matthew 16:1–3 NIV, emphasis added).

Let me repeat this so that we will not drift away: “You know how to interpret the appearance of the sky, but you cannot interpret the signs of the times.”

So we must listen very carefully to the truth we have heard, or we may drift away from it. For the message God delivered through angels has always stood firm, and every violation of the law and every act of disobedience was punished. So what makes us think we can escape if we ignore this great salvation that was first announced by the Lord Jesus himself and then delivered to us by those who heard him speak? And God confirmed the message by giving signs and wonders and various miracles and gifts of the Holy Spirit whenever he chose.

The Pharisees and Sadducees couldn’t interpret the signs of the coming of the Messiah, and they couldn’t recognize that they were seeing and talking face-to-face with what many prophets and righteous people longed to see and hear yet didn’t see or hear. The magi, on the other hand, were greatly perceptive. When they recognized the time of the birth of the Savior and saw his star in the east, they took the opportunity to come and worship him.

The star they had seen when it rose went ahead of them until it stopped over the place where the child was. When they saw the star, they were overjoyed. On coming to the house, they saw the child with his mother Mary, and they bowed down and worshiped him. Then they opened their treasures and presented him with gifts of gold, frankincense and myrrh.

Even for those whose knowledge of the Bible is limited, they are familiar with the book of Genesis. It is, after all, the story of the beginning, of what has happened. It prepares us for what is and what will be. Despite what you know, however, there are areas that may remain a mystery.

Author Peter Shenouda’s Genesis: The Story, the Allegory, the Prophecy, and What Matters is the culmination of his fifteen-year study of Genesis. It is a concise treatise of this book of beginnings. Shenouda has put together information that really matters to those reading the entire Scripture, including the Apocrypha. You’ll learn whether Genesis is only a book of stories or if it offers any prophecies about the future. Discover what is behind the letters in the story of Joseph. You’ll also develop an understanding of what Jacob said about the future of Israel.

Genesis: The Story, the Allegory, the Prophecy, and What Matters helps you develop a better understanding of the book and, as a result, of the Bible as a whole. It’s an opportunity to increase and deepen your biblical knowledge and faith.

Peter Shenouda earned an MBA in information systems from Pace University in New York. He participated in Bible study and research at St. Mary and St. Anthony Church in Queens, New York, and St. George Abo Elnaga Cathedral in Tanta, Egypt. He is married and has two children.