Expressions of the Heart

Poems, Prayers, and Reflections on Nature, Faith in God, and Christmas 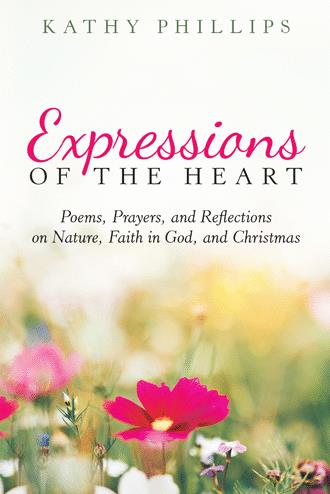 Throughout the countless pages of the histories of man

Moses tended sheep for years until his destination

Was pointed out to him by God; he was to lead a nation.

Yet a shepherd boy was destined to become a nation’s king.

Mary, just a teenage girl, was chosen as the one

To be the earthly mother of Jesus Christ, God’s son.

Joseph was a carpenter, his greatest tool, his hand,

Yet he it was who taught the Lord the things you’d teach a man.

Kept their lives available for God to lead and guide.

Expressions of the Heart contains the author’s personal observations on human relationships, the wonders of God’s creations, and her personal journey as a follower of Jesus Christ. It also contains a special section of Christmas poems written over the years.

Inspirational poems like “My Lord” and “His Light Divine” uplift and motivate, but there are also poems like “Seek Your Face and Pray” and “Keep My Place in Line” that present challenges that befall a Christian in the daily struggle to keep faith. There are poignant homages to caregivers, like “A Mother’s Task Is Never Done” and poems that capture the spirit of parenting, like “Goals” and “The Careful Gardener.” Poems like “Seasonal Gossip” spark sensory memories that enable a reader to almost smell and taste the change in season. This collection will encourage you to examine your relationships with friends and family, have a closer walk with God, or simply notice the world around you.

Kathy Phillips has been writing poetry since the sixth grade. Her original files contain "scribbles" on napkins, envelopes, and the backs of church bulletins, depending on where she was when words came to her. Her poetry has been published in newspapers and both high-school and national anthologies. Ms. Phillips lives in the woods outside of Huntsville, Texas, with her two cats and assorted wildlife.