The Blasphemy of False Identity

by Dr. Desmond A. Mattocks 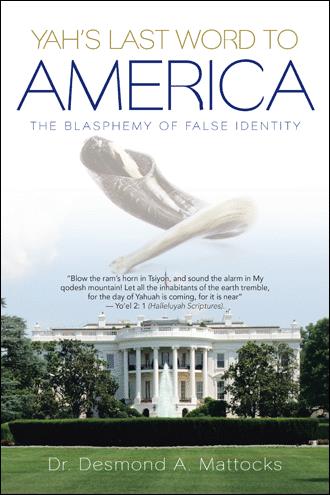 If only the nation had not ploughed with the 'heifer' of sin, and played with the politics of Delilah, its looms of prosperity would have remained intact. And how ghastly to behold: the nation is eating the honey of prosperity from the innards of a decayed moral carcass. Providently called Uncle Sam, America fell in love with treachery down in the valley of Sorek. While responsibility imposed a moral duty, emotions exposed America's enthralling weakness.

There is of convenience a shift in morals, it is a change made necessary to validate the culture's lifestyle. Many have abandoned the good old wine of morality, and are made drunk by the new wine of liberalism. The calamities each day testify of the crooked path on which the rebellious are travelling. On this treacherous route, truth has become an option, not a necessity, as men prefer the forbidden fruit than they are inclined to eat from the tree of life. Husbands and wives are driven from their homes, as the paradise promised is lost to the will of self.

The climate change is obvious, it shows that there is a moral bent, an agenda, designed to desensitize the mind, whereby the society is being influenced by the liberal persuasion. They have introduced a monsoon of unnatural ideas, in which the drier soils of men souls have reduced the goodly yields in the family homes. From this, the church has seen an increase in weed and pest proliferation, in divorce and remarriage, the society being the beneficiary of much pain. The irony is well worth pondering. At great cost, and with the effrontery of the desperate, men are trying to save the planet, but not the polluted souls that occupy the planet.

It's a chance in which many are now made to feel guilty for the ethics they hold, given by divine command. This vacillating culture is redefining almost everything that Yahweh has already defined. Thus, man is seeking to abandoned the divine laws of Elohim, which were given to regulate our behaviors, and set the perimeters of our movement. And so, like a blood hound, unsanctified persons are sniffing out those who have decided to stay loyal to Truth.

Taken from the Divine utterances of the Scriptures, the evidence is incontrovertible and overwhelming. Many now live their lives in the words of the popular thought: "I did it my way". But if we be Frank, even Sinatra knew that there are serious consequences. Regrets, too numerous to mention here. Enough to say indifference to Yahweh, forgetting the command of the Seventh day, an unregulated Wall Street, same gender relations, are they not besetting sins, sanctioned by a pejorative culture? Yeshua said: "I am the Way, the Truth and Life" (John 14: 6).

America's morality is not one newly acquired. History reminds us of our moral ancestors, which include Sodom and Gomorrah, Babylon and Rome, whose segue of unbelief led to their demise. The people worshipped their possessions, and not the giver of the possessions, from whom all blessings come. Except for the want of humor, no man can honestly claim to know the Father, while rejecting the Son whom He sent. He is the only way! (Acts 4:12).

There are certain dispositions and proclivities in our culture that lead some people to believe that they have the right to express their habitudes and impulses without regard for the Divine edict. One is dismayed at the brazen attempts being made by the culture to amend the texts of the Divine Constitution. And while man cannot change the immutable Word of Yahweh, by way of legislative enactment, liberal theology and judicial activism, a referendum has been called on the Scriptures. In this, we come to know that intent always precedes content.

Almost every event that forms our behavior in daily life could easily be rated R. It is an age in which everything is permissible, though not advisable. The liberal persuasion has done a horrible injustice in educating our children to believe there is no absolute truth. As if life has become unhappily dull, lewdness, profanity and disrespect have been routinely introduced into our homes as means of entertainment. These are the moral centerfold of our degenerate society. Perhaps President John Adams was right when he said: "Our Constitution was made only for a moral and religious people. It is wholly inadequate to the government of any other."

In the institution of marriage, a violation is clearly seen. Vile affections are being passed off as normal, and are given Congressional approval. While leaders are dissertating upon the relevance of biblical morality, sin abounds. Perhaps in prospect of this generation did Peter write: "While they promise them liberty, they themselves are the servants of corruption; for of whom a man is overcome, of the same is he brought into bondage" (2 Peter 2:19).

Despite man's veneration of the Constitution, fine document though it is, the charter of man's liberty is the Sacrifice of Yeshua, His Blood. As we trace events in a desperate and unhappy world, the end of all things are shaped by the inspired words of Elohim, not by Congress. The paradox thus remains, that of all the places where the credulous seek to obtain freedom, it has never been found in the documents of man. While it is rumored that man is essentially a reasonable being, that he is great, almost always, his behavior lets him down.

If only “we the people” of America could understand that the American Revolution was only a mere political upheaval compared to the moral war we now face. We are divided in morals and ethics more than in culture, wherein truth is more an option than a necessity. Ever since time began, the most celebrated nations have been those that have abridged the exorbitant chasm between morality and secularism, between feelings and principles, righteousness and unrighteousness. America appears to have joined the infamous tradition of derelict and ungodly nations that have surrendered their integrity for power and wealth, like ancient Babylon. In this The Last Word to America, the intent is to paint a living portrait of the ways in which America has abandoned divine counsel—how Washington, significant events, and personalities have shaped personal experience. It explores music and the perverse arts, through which philosophers are damaging our young people and the families of America are sullied.

Dr. Desmond A. Mattocks was born in Jamaica but immigrated to England as a young boy. He is a biblical counselor and court-certified mediator. He holds a PhD in Christian counseling and an MBA. Mattocks has appeared on the 3ABN TV, Today, and Issues and Answers programs. His other books include Redemption Therapy, Sketches of an Epoch, A King of Capernaum, and Broken Family—Fractured Society.