Readings in the Books of the Apocrypha 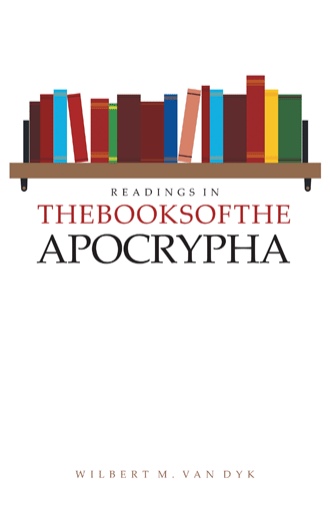 Chapter One: “The Development of the Old Testament Canon”

The Council of Jamnia (90 A.D.) affirmed the Hebrew books as divine revelation and judged that in the Greek books of the period God’s revelation was unclear, or apocryphal. The Christian church does not agree on the authoritative value of these books.

Three visions of conflict between good and evil and a final vision in which God gives Esdras permission to write what he saw.

Chapter Four: “The Apocryphal Books of History, Part One”

Third Esdras includes the story of “The Three Guardsmen.” Baruch gives advice to the exiles in Babylon. Additions to the Book of Esther adds piety to the book. The Prayer of Manasseh seeks forgiveness for his earlier wickedness.

First Maccabees tells the story of the Jewish revolt against the cruel decrees of Antiochus Epiphanes. Judas Maccabeus and his brothers provide leadership. Second Maccabees honors Judas and reflects on elements of the history told in First Maccabees.

Chapter Six: “The Apocryphal Books of Wisdom, Part One”

The Wisdom of Jesus Sirach, or Ecclesiasticus provides guidelines for living wisely in the “fear of the Lord.” He cites Old Testament examples of wise living.

The Wisdom of Solomon, also known as The Book of Wisdom shows influences of Greek thought when it personifies wisdom.

Tobit imagines a pious Jewish family during the Assyrian captivity. Judith was a courageous widow who beheaded the Assyrian general during the campaign against Jerusalem.

The Song of the Three Children, Susanna, Bel and the Dragon honor Daniel and his three friends for their piety, wisdom and courage.

What are they? Where did they come from? Why are they called “apocryphal”? What do they say? How do they say it? An introductory chapter sketches the development of the Old Testament canon and the apocryphal books. The following chapters contain key sections from each of the traditional fourteen books. These quotations are introduced and connected to assure a snapshot of the content and a sample of the style. Most of the apocryphal books were written more than two thousand years ago in the Greek language by and for the Jewish community. They provide valuable insights into Jewish culture, religion, piety, and history during the four hundred years between the Old and New Testaments. Thought questions at the end of each chapter invite reflection on the relevance of the content of these books for today.

Reverend Van Dyk is the academic dean and Associate Professor Preaching, emeritus, at Calvin Theological Seminary, in Grand Rapids, Michigan. Prior to his service at the seminary he was a pastor for churches in Illinois, Florida, and Michigan. In recent years he has taught various adult study groups, including the Apocrypha.