Let no one take you captive 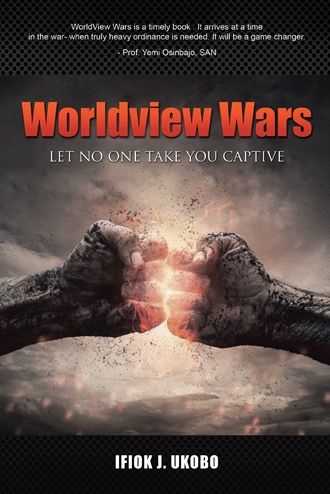 There Is a War Going On

The twenty-first century came with so many technological feats, a digital revolution, scientific breakthroughs, and economic possibilities. Unfortunately, the same century has recorded a worrisome global crime rate, horrifying moral bankruptcy, and highly intelligent but deceptive arguments against the biblical worldview and Christian civilization. These arguments are targeted at defeating the fear and counsel of God in our lives, churches, communities, and country. As a result, everything from sexual purity to marriage, family, truth, politics, economics, and gospel is being redefined to fit the twenty-first-century postmodernism. Perspective on everything in life is gradually shifting from God’s point of view to mankind’s point of view, both in personal life and the public space. The battle line is drawn. The battle to dominate the thoughts, ideas, and practices of people with a humanist point of view is raging in every sphere of life. A battle over whose point of view will dominate the thoughts, ideas, and practices of people is raging in every sphere of life. This battle is not new; it started as far back as the garden of Eden. Below is the record from the book of Genesis:

Now the serpent was more subtil than any beast of the field which the LORD God had made. And he said unto the woman, Yea, hath God said, Ye shall not eat of every tree of the garden? And the woman said unto the serpent, We may eat of the fruit of the trees of the garden: But of the fruit of the tree which is in the midst of the garden, God hath said, Ye shall not eat of it, neither shall ye touch it, lest ye die. And the serpent said unto the woman, Ye shall not surely die: For God doth know that in the day ye eat thereof, then your eyes shall be opened, and ye shall be as gods, knowing good and evil. And when the woman saw that the tree was good for food, and that it was pleasant to the eyes, and a tree to be desired to make one wise, she took of the fruit thereof, and did eat, and gave also unto her husband with her; and he did eat. And the eyes of them both were opened, and they knew that they were naked; and they sewed fig leaves together, and made themselves aprons. (Gen. 3:1–7 KJV)

After some dialogue with the Devil, however, Eve’s perspective on the tree in the midst of the garden changed from, “But of the fruit of the tree which is in the midst of the garden, God hath said, Ye shall not eat of it, neither shall ye touch it, lest ye die” to “the tree was good for food, and that it was pleasant to the eyes, and a tree to be desired to make one wise.” The Devil had succeeded in birthing another perspective on the fruit of the tree in Eve’s eyes. The Devil may have told Eve to forget about God, look at the tree objectively, and evaluate it using only her limited intellect. Seeking objectivity outside God is courting deception. The Bible states, “And even as they did not like to retain God in their knowledge, God gave them over to a reprobate mind, to do those things which are not convenient” (Rom. 1:28 KJV).

Whatever the case, Eve took an independent view of the tree and its fruit. The result was a creation of another point of view besides God’s point of view on the tree. This was a human point of view. It was the beginning of the rejection of divine perspective and the replacement of same with human perspective. The Bible says, “For to be carnally minded is death; but to be spiritually minded is life and peace” (Rom. 8:6 KJV). Death was already at the door of Eve’s life, and then the worst happened.

Eve took the fruit, ate it, and gave some to her husband, who also ate it. The Bible recorded that after eating the forbidden fruit, their eyes were opened. This was not the opening of physical eyes because they were not blind before. It was the opening of their senses to perspectives other than God’s perspective. It was a demonic opening of the senses to varied perspectives in life that was bound to confuse and distract mankind’s focus on God and His Word until the end of the age. The equation in the garden had changed from just God’s one perspective on life to multiple human perspectives, in accordance with the deceit of the Devil.

God’s design was for mankind to live by His Word and His point of view. Jesus said, “Man shall not live by bread alone, but by every word that proceedeth out of the mouth of God” (Matt. 4:4 KJV). However, the Devil seduces people to develop perspectives to life, marriage, sexuality, community, economy, education, law, science, etc., apart from God. A battle is raging across the world as to whose perspective will rule in our lives, communities, and nations. Unfortunately, the Devil’s side seems to be more aware, ready, and active in this battle than the people of God.

You must ask yourself as a Christian, “Where do I stand in this battle?” Are you going to be like Adam, who waited for Eve to dialogue with the Devil and bring the result for him to consume, or are you going to arise like Phinehas, the grandson of Aaron, who was jealous for God’s glory with such a zeal that it quenched the wrath of God upon the sinning Israelites (Num. 25:1–11)? The Devil is fighting hard to deceive human beings into replacing God’s perspective with various human perspectives. This is called the war of worldviews, and it is getting fiercer by the day. If you are not aware of this battle raging against your life, family, community and Christian civilization, you possibly have been defeated in many areas of life. Now is the time to wake up to the battle of worldviews and fight for your life, your children and community. A few insights into this battle are presented below:

In Worldview Wars, Ifiok J. Ukobo exposes the hidden, but very aggressive, war of worldviews being waged against righteousness in our personal lives and community. This battle has now arrived in every home, community, and country. We are under attack, and the battle front spans our schools, media, national policies, and pulpits. Families are breaking down, children are becoming rebellious; communities no longer have shared values, and a cultural flux is emerging. In Worldview Wars, the author presents practical ways to win the battle in your life, family, and community. This book will renew your mind and help you to stay free and bring freedom to others that have been taken captive. You will also discover practical strategies that will help you to teach your children a biblical worldview and arm them against deception.

Ifiok J. Ukobo is the founder of Think Right and Live Right Club, a leading voice on reclaiming a biblical worldview in Nigeria. He served as vice principal for academics at Africa Centre for Theological Studies before moving on to initiate a biblical worldview discipleship program in 2009. He lives in Lagos with his family.