Evolution Is a Myth. Darwin Admits Evolution Theory Is Not Supported by the Evidence. 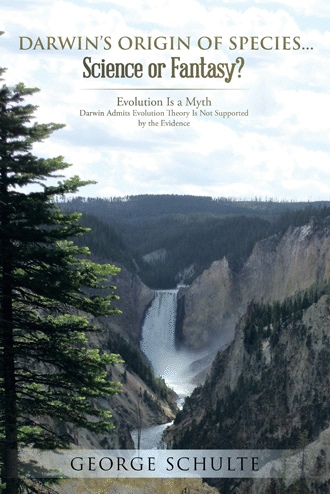 Darwin continually reported, throughout the book, that much of the evidence that he observed seemed to disprove his theory. But then, in each case, he would go through what appeared to be extremely convoluted and unnecessarily elaborate machinations to explain away the evidence that was before him.

It all started with Darwin. Have you ever wondered what Darwin’s Origin of Species... really says? Can you come up with logical answers as to why evolution is not fact? Geologist George Schulte provides a careful analysis and logical critique of Darwin’s book, chapter by chapter. Verifiable facts are separated from fantasy and each issue addressed with surprising results.

Darwin’s Origin of Species...Science or Fantasy? will reveal:

• The glaring lack of scientific evidence for Darwin’s theory

• The case of the missing transitional forms

• The crucial differences between natural selection and variation within species

• What the geologic record really says

• The grave difficulties with Darwin’s theory in his own words

This book will answer questions and settle issues. It is an invaluable resource for students, parents, teachers, and anyone who is interested in separating fact from fiction—the proven from the imagined.

George Schulte earned his BS and MS degrees in geology from the University of Kansas and worked in exploration for the petroleum and natural gas industry. He currently teaches biblical and scientific evidence for the Creation and the Flood, as well as the lack of evidence for evolution. Schulte lives in Overland Park, Kansas, with his wife, Mary. He and his wife have two married children, three grandchildren, and three great-grandchildren.