YOU DON'T HAVE TO MOVE THE WASHER TO MAKE TOAST

by Susan A. Rader 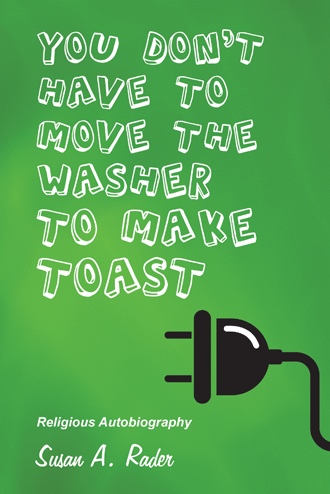 My husband put his chin on my shoulder to look down at the frozen lasagna box. He noticed I was studying the directions in detail.

“Oh, this is the same box but it's got 'new and improved' which means they probably ruined it.”

“Hmm. A bit early for lasagna.”

“Not if I'm planning supper tonight.”

“Oh well, then that makes sense.”

I gave him an elbow push.

“Are you insinuating that I'll forget by tonight?”

David put his chin on the top of my head.

“Well, it crossed my mind.”

I ignored him and pulled the plastic bowl of frozen lasagna out of the box.

My husband moved his chin to the other side of my neck, then began poking the plastic. He drew an imaginary horizontal line.

“You get this half, and I'll take this half.”

I erased his imaginary line and drew a line vertically through the frost.

“Nope. I'll take this half. YOU take that half.”

Silence. I turned my head toward my husband and raised my eyebrows as I leaned back on him.

We both burst out laughing.

“Like I can eat this much in a month! Maybe you could eat all this at one meal, but I can't” I poked him in the ribs. “Besides, I want the front half of this lasagna thingy. It's shallow and cooks faster.” I examined the plastic container trying to see through the frost.

“Not if I take it out of the box!” More laughter.

I pointed to the long packaged garlic bread still frozen and glistening on the counter.

“That's enough garlic bread to feed fourteen people.”We exchanged glances, as I waited for his comment.

David pretended to figure some calculations in the air and asked,

“Then you think that's enough for the two of us?”

We were going over the meal plan for this evening, but discussing this over breakfast. When I remembered to plan ahead, then I think it's great to plan ahead. Other wise, I wing it for dinner and no one likes my chicken surprise.

With a kiss goodbye, my husband added, “Don't forget to turn on the oven!”

“Ha, Ha. Very funny, funny man. Just for that your half won't be cooked!”

David left for work just as my cell phone buzzed. It was a text message from our daughter. She was already at work.

The smile on my face for her message began to fade. One little thoughtful moment meant so much, for so many reasons. It feels as if I have lived many lifetimes and I've been many people. A tear ran down my face.

It was three short years in the 1970's. The timing was just as the Women's Army Corps transitioned from 'WACs', as it was called, into Regular Army. My life was so different then, because I didn't receive my new life until1981.

My daughter's text message made me feel good. She's old enough to understand more about life in general. I recalled some of my time in service, and not coming up with anything better, I replied: “Thank you. Very thoughtful. I love you.”

No wonder so many who are in military service never talk about it. Who can relate to the circumstances? It even goes unspoken between veterans. Sometimes there is little sense to what we experienced. My goal when I enlisted was to have a career in the framework of the military, but it ended unexpectedly as a result of a trip through a cyanide gas chamber. That morning in 1974 changed my life. I should have died.

Thinking about this on the larger scale, this wasn't the only time I should have died. It was as if each stage became one lifetime, just enough in one direction for Life Lessons, to suffer loss or to triumph, only to be stopped by near death. Then, immediately after one sequence, my life would take another direction. The pattern is too marked to be coincidence. And, there is a reasonable explanation.

Most people who write this type of book are professionals, but I speak from experience. I grew up in a dysfunctional family. I realized I had a bad background and set out how to find what I didn’t know. We don’t often see why we are going through trials or even understand them. I know I have been through this, but others have been through worse. I hope my story will help you. It will make you laugh and cry. There is always hope in Christ Jesus. Maybe, a little help from me can get you on the right path.