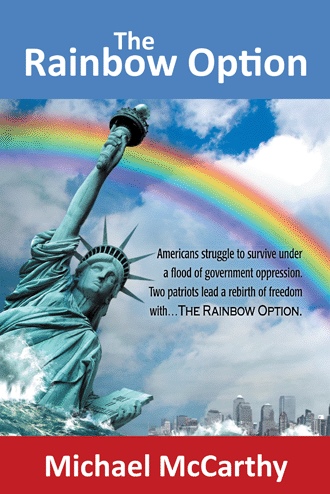 
Judge Block took off his tie, put on a windbreaker and left his office at the 9th Circuit Court of Appeals. It was lunchtime on a sunny day. He took Bus 14 to Justin Herman Plaza. He hummed to himself as he strolled up to a food truck and bought a hot dog. He sat on a bench and looked at the latest tent city erected by “Occupy San Francisco.”

One of the protesters emerged from his $800 backpacking tent and adjusted a placard that hung from his tent pole. He stumbled a little; still hung over from last night’s partying with his fellow occupiers. He opened a plastic-wrapped backpackers’ gourmet food item and began eating it like a sandwich. His placard read: WE ARE THE 99%! REDISTRIBUTE THE WEALTH OF THE 1% !

Then he ambled unsteadily toward the hot dog truck in his $300 hiking boots and $200 SPF 60 outdoor shirt. Watching, Judge Block moved to the other end of the bench in order to hear better.

The hot dog truck owner asked, “What’ll it be?”

The expensively dressed protester replied, “You are exploiting defenseless pigs and cows with these disgusting unhealthy hot dogs you sell! You should be serving healthy food and giving it away for free. You don’t deserve to be here! Leave!”

The truck owner was dressed in jeans and a t-shirt. He calmly looked over the expensive “outfitter” hiking gear the protester was wearing. Then he noticed the backpacker food item he was eating.

“I’m willing to have an open mind. What’s that you’re eating?”

“May I see the package?”

The young cart owner studied the package, looking at both sides. Then he began reading, “Prosciutto jerky. Processed from pampered maiale in the Tuscany region of Italy, fed on the finest high intensity farmed corn, oats, and our secret seasoning: Montepulciano d'Abruzzo wine and grapes. Imported to the U.S. by High End Marketing Incorporated. Contains one serving. Price: $45.”

Looking up at the protester, the cart owner said “Sounds like food for the 1% to me.”

Looking back down at the package, the cart owner asked, “Do you know what prosciutto is? Or maiale?”

The young protester looked confused. “My girlfriend made me go vegan. She said prosciutto is made from compressed soy fiber.”

“I hate to break the news to you, but prosciutto is ham, and maiale is pig. You’re eating pork, buddy.”

His eyes widened as he looked at the thin pink strips in his hand. “What! That can’t be. You’re just repeating talking points from the FACTS News Network.”

The truck owner handed the package back to him. “Read it for yourself.”

“No! My girlfriend said it was soy fiber, so that’s what it is. Screw you!”

The young man gave him the finger, then turned away and walked back toward his tent.

“I admire the way you attempted to educate that young man about everyday reality, like reading the label.”

“I did the best I could with what I had to work with.”

Judge Block laughed at this. Then he stooped over and used his finger to trace out a symbol in the sandy soil in front of the food trailer.

The truck owner quickly looked around. Seeing no one watching them, he came from inside the trailer and stooped over.

His voice pitched low, Judge Block said, “A nation of laws,” The truck owner softly spoke the counter-sign: “and not of men.”

The lunch crowd was drifting away, going back to their offices. Since no one was close enough to hear, the truck owner continued, “I’m new to the CRM. Where did this symbol come from?”

Judge Block quietly replied, “The early Christians were persecuted by the Roman Empire and had to go underground. They identified themselves to each other by drawing the ichthus symbol, which means fish in Greek.” Here he drew it in the soil:

“In the Greek spelling of ichthus, , the letters stood for Jesus Christ, Son of God, Savior. We in the Constitutional Resistance Movement devised our own symbol, an icon of the two tablets given to Moses, containing the Ten Commandments. This is the earliest instance of a nation governing itself by laws and not by the changeable whims of a king.”

The truck owner grunted. “Makes sense. I learned the Ten Commandments in Sunday school. Before Sunday School was made illegal.” He looked carefully at Judge Block, memorizing his face.

Judge Block rubbed out the symbols with his shoe. ”We need a new app.”

“We need an app that will allow us to pair with any Federal cell phone, track its whereabouts and eavesdrop on conversations.”

“When it’s ready, put it out as a download on .ARK with the usual encryption. Code name: Swamp Fox 2.0. Swamp Fox 1.0 is an unqualified success, by the way. Our first beta test was to ‘out’ some of the food Gestapo agents terrorizing school children and their mothers. Quite satisfying.”

America has become a different land. Gangs and hunger stalk the nation and most aspects of life are controlled by big government. Small resistance groups escape to refuges called ARKS, working to restore freedom.

After Federal Judge Barry Block blocks new super-seeds that can save Africa from famine, he’s abducted to the Sierra Nevada wilderness where he must learn to grow his own food. While there he finds the humility to ask for help from a Higher Power. When he is returned, he joins with the resistance movement to sabotage the petty tyrannies inflicted on Americans. Meanwhile, eighteen-year-old Shoshone Joseph Wakini becomes the leader of a band of ARK survivors after he helps them evade predator drones. When the government begins infecting the ARKS with a deadly virus, brilliant African-American botanist Dr. Grace Washington and her software genius husband Isaiah Mercury risk their lives to develop a cure. As the nation erupts into anarchy, a promise called The Rainbow Option is born.

In this thrilling sequel to The Noah Option, as Americans struggle to survive under a flood of government oppression, two freedom fighters must find a solution before it is too late for the nation.

Michael McCarthy is a process excellence consultant and author. While serving on the 157' schooner Te 'Vega in Europe at the Flint School, he became passionate about the three keys to prosperity: constitutionally limited government, free enterprise and capitalism.