A Layman's Study of Matthew 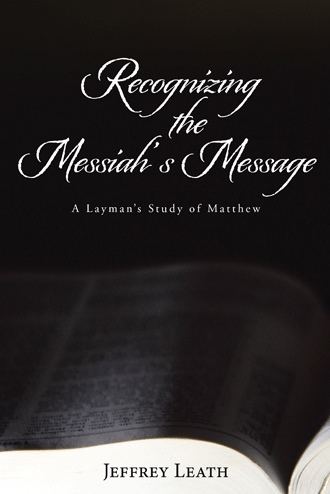 Posted on September 22, 2015 by David Daniels WiseReader.com Jeffrey Leath WestBow Press, 2015 ISBN: 978-1- 4908-7078-6 This is Jeffrey Leath’s second book, and with it he continues demonstrating the valuable contribution diligent laypersons make in the biblical and theological education of our congregations. As with his first book, Solid Food: A Layman’s Study of Hebrews, this study of Matthew was first presented to the Sunday School class he teaches at Pine Grove Church in Bowmansville, Pennsylvania. Christians generally understand the four gospels – Matthew, Mark, Luke and John – to present four pictures of Jesus. Matthew – Jesus as the King Mark – Jesus as a servant Luke – Jesus as the perfect human John – Jesus as God incarnate While Leath says he also studied the gospels through these four pictures, he now believes Matthew’s purpose is more extensive than simply presenting him as Israel’s King… I find that Matthew is being led by the Holy Spirit to reveal more than merely Jesus’ position as King and Messiah. Matthew is sharing with us the message of the Messiah and His message to the early church is still relevant today. Through twenty-seven chapters, Leath unpacks the man and the message of this one who came as Israel’s Messiah and the Savior of all who believe in him. Leath carefully puts readers into the context of the first century world of Jesus – both in terms of the occupying Roman government and the Jewish cultural and religious world in which Jesus lived. I hope readers won’t miss the way Leath willingly draws from all the resources available to him: his daughter’s knowledge of Jewish history and culture, received from an International Jewish Studies education through Friends of Israel and Cairn University, and from several classic texts focused on life in first century Israel. The background and color Jeffrey Leath brings to his study is available to any serious student of Scripture who is willing to invest to the time to research the sources available to North American Christians. They study moves consecutively through Matthew’s gospel, unpacking the high points of the text, never losing sight of the imperative to apply the principles of Messiah’s message to our own lives. In Matthew 24, when answering the disciple’s questions about the destruction of the Temple and the end of the world, Jesus outlines a number of significant eschatological events: The destruction of the temple Wars and rumors of wars Famines and earthquakes Persecution of Christians (“account of my name”) False Prophets Increase in lawlessness Abomination of desolation A great tribulation False christs Loss of power from the heavens (sun, moon, stars) Return of the Son of Man Leath doesn’t succumb to the temptation to dwell solely on dates and timing of events, but rather emphasizes the spirit of Christ’s teaching to be ready and watchful. He writes: These things will happen, and some have already happened. Jesus’ message to the disciples, however, was more than just to satisfy their curiosity. His message was: know the signs, be ready, be faithful and prudent, know the signs, be ready, be faithful and prudent, keep watch, and be prepared because you do not know the day or hour, and administer what has been entrusted to you until the day of reckoning. There is a lot of good teaching on how to live today in light of Christ’s return to this world. Leath quotes Michael Green: "Prophecy is not intended to give us a detailed picture of the future, but to lift up our hearts in expectancy so that we make ourselves ready for what is to come. … Jesus did not tell us to get out our calculators and polish our crystal balls, but to live a holy life in preparation for meeting Him." If you are looking for a devotional study of Matthew’s gospel for personal study or a small-group setting, give Jeffrey Leath’s study guide consideration. He reads easily, is warmly evangelical, and consistently reminds us that good Bible study leads to changed lives.

Hebrews were waiting for the Messiah to come and set them free; free from the bondage of the Roman enemy. But then, announced to a group of shepherds one night, the Messiah arrived, was wrapped in strips of cloth, and took His royal position in a feed trough. This was the Son of God who takes away the sins of the world! He was given authority from His Father. He would show signs of His Messiahship and have a great following because of His miraculous healings; even bringing the dead back to life! But His message was confusing to some. He didn’t meet the expectations of the Messiah. He said that we should love our enemies. He said that God was a loving heavenly Father and even referred to Him as “Daddy” (Abba Father). And then there was His message of relating to God through humility.

Matthew’s writing helped the early Hebrew Christians recognize Jesus is the Messiah; an important message that encourages one to stand firmly in faith. Recognizing and identifying with the Messiah’s message will lead us to call upon our one true Teacher and Savior, Jesus Christ through whom we receive God’s loving grace and mercy.

Jeffrey Leath is originally from Mooresville, Indiana, and now lives in Bowmansville, Pennsylvania. He has been teaching Sunday school for over thirty years. His study of Scripture incorporates the study of the culture, language, and environment of the writer and the writer’s audience. Designed for personal or small-group Bible study, his work is meant to assist the layperson gain a deeper understanding of Scripture.

He and his wife, Reta, have three grown children and attend Pine Grove Church in Bowmansville. Recognizing the Messiah’s Message, A Layman’s Study of Matthew is his second published work.