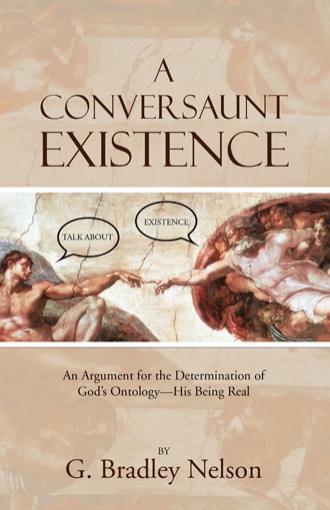 There is evidence of a different kind that shows everyone how the idea of a rational, complex existence of being has a footing in reality. To do so, I would like to examine a conversation I had with my mother, Lenora Nelson. She had done some thinking, and she made an astute observation about what is real to us. While sitting around the kitchen table one Saturday afternoon, she told two young men—her nephew Don Taylor and myself—an astonishing fact about the nature of self-awareness. She did so without it seeming to be the least bit extraordinary.

My mother said, in reference to time, "I want you boys to know that no matter how old I have become or appear to be on the outside, I have not changed how old I think of myself on the inside." She laid claim to having no age, or giving age no relevance in her perception of herself. She perceived herself as being ageless. Anyone, who is willing to be honest, will admit that they are not thinking about themselves with any regard to the passage of time either— that is, until we look into a mirror.

The idea that we don't perceive age as being an important factor when thinking about ourselves has many interesting possibilities. I think it is useful for defending my position. We somehow automatically aspire to the superlative and forgo the mundane. What this insight highlights is how self-perception and self-awareness quite naturally and quite automatically interject transcendence and rationality into all aspects of our thoughts and perceptions. This level of complexity is absolutely astounding and without comparison.

What undeniable levels of mental complexity do compare to is the fact that humans can reasonably assume the idea of continuing to exist forever isn't some foreign pie-in-the-sky invention. It is a part of our makeup, our psyche, and as such, lends credence to a concept of reality that includes the possibility of life after death, which is rejected outright by materialists and naturalists.

I was recently introduced to a book written by the Christian apologist C. S. Lewis that includes a similar argument. In the book Reflections on the Psalms, Lewis gives the example where we are surprised by the passage of time. The example is about a comment one makes when being reintroduced to a child you haven't seen for quite some time. He says our response usually registers some surprise like, "My, how they've grown." This is another example of the human spirit not quite believing time is strictly a chronology.

The King James Version of that passage uses the word season instead of an appointed time. Some people have used this idea of seasons and tried to reinterpret the passage to suggest that time is cyclical. I don't agree with that interpretation. However, I do believe most human beings innately accept the fact that there is more to life than material physicality and that life in fact has purpose, which is exactly what the King James passage goes on to proclaim. Where does that acceptance come from? Well, the answer cometh in due time and with due diligence.

At this juncture, it can be said that we have exposed inadequacies of the worldviews of the naturalists, materialism, and nonmaterialism (Eastern mysticism). Not only have we found a path through that maze, but in the process, we have discovered how the proponents of materialism and nonmaterialistic mysticism have instinctively used their capacity for reason and transcendence to become "intelligent designers" of their own make-believe worlds.

The materialists produce unsupportable reasons for the gaps in evolutionary evidence, and in mysticism it appears that the individual one (Atman) has unsuccessfully tried to produce the encompassing all (Brahman). So it seems we are now ready to continue our journey by examining more of what this rational and intricately complex and contingent mind/body can successfully uncover.

Q. What is the famous quote attributed to the philosopher René Descartes?
A. "I think, therefore I am."

Q. While Descartes was defending his proposition, what did he claim was impossible to accomplish?
A. He showed that anyone who tried to deny having an existence was in fact confirming that very existence.

Q. What does the author mean when he uses the term transcend or having the ability to transcend?
A. Transcending is about having the capacity to rise above or step outside of your surroundings and give a rational, objective account of the facts and truth of those claims.

Q. What groups believe that the sense data and the events in life are illusory?
A. There are the religions of Eastern mysticism that speak in terms of life being an illusion. Postmodernists also think we create our own reality.

Q. What point did Dr. Lund, Lenora Nelson, and C. S. Lewis all support?
A. Man's mental abilities are more substantive than what is normally ascribed to man's intellectual capabilities. What this also reveals is how those transcendent aspects of commonsense perceptions shouldn't be discounted or ignored.

Q. Are the positions held by the adherents of mysticism and naturalism accurate in their definition of the actual or the factual way to interpret the world we inhabit?
A. The current positions in Eastern mysticism have a major problem trying to match their religion to reality, and the proponents of naturalism/materialism cannot provide any answers that can be trusted. Rather, an endeavor that details and establishes the complexity of man's intellectual and rational abilities and develops this new understanding of how man can ascertain a truthful account of reality would be a far superior pursuit.

Discussions about existence have generally come through the subject of philosophy. The thinking and thoughts about God's existence are well documented. Both sides of the standard arguments for God's existence have been presented. Current thinking has turned to evolutionary concepts that deny God exists or claims that God is a mere impersonal force. However, the time has come for a fresh look into how man can know of God's existence.

A Conversaunt Existence is just such a look. Changes have been made to the standard arguments for God's existence. New avenues of thought have been incorporated to corroborate these changes. There are reasons for directing our thoughts toward God's existing: First, it's foolish to let others steer one's thinking into denying God's existence. Ultimately, God wants everyone to respond to His invitation, accept His lifesaving and life-giving message, and participate in writing His story.

A short treatise on existence with an emphasis on the existence of God.

Nelson harkens back to a premodern era by using the archaic word "conversaunt" in place of "conversant" in his title. In doing so, he honors the fact that humankind has always experienced existence as a common form of knowledge. Nelson's work, though deeply philosophical in content, is meant from the beginning to have a personal impact on the reader and not just be merely theoretical in nature. Moreover, his overarching goal is to demonstrate the existence of a personal and involved God. Such authors as C.S. Lewis and Soren Kierkegaard help lead the way. In order to show that the human race is capable of understanding and even connecting with a God figure, Nelson coins a new term intercomplexicate which describes a self-consciousness that is able to make quick evaluations of complex ideas, leading to moral understanding. The author discusses both the strengths and weaknesses of ontological arguments for God's existence and also attempts to disprove popular scientific arguments against the existence of a deity. The idea of contingency (that existence can only occur due to a prior cause) is of great importance in later chapters, as Nelson argues that existence must be contingent on a "necessary being," such as a primary mover or first cause. In closing, the author provides a case not merely for a creator ("watchmaker") God, but for a personal God who continues to be involved with creation. Nelson has a penchant for mixing theoretical and philosophical verbiage with nonstandard language (such as using "by da vey" instead of "by the way" or comparing God with Jean-Luc Picard of Star Trek: The Next Generation). He seems to be seeking a balance between the often opaque material he presents and the personal effect he hopes to have on readers. This balance, unfortunately, is rarely found. Nevertheless, Nelson provides sound arguments worthy of further reflection. Review questions after each chapter are helpful for guiding and focusing the reader.

Attaining the age some call “senior” provides many experiences with this event called life. Contrary to the popular sentiment of this youth-worshiping culture, some things I’ve learned should be beneficial to you. I embraced Christianity at twenty-six and made up for lost time by attending Oak Hills Bible College. I continued by attending Bemidji State University, receiving a bachelor of arts in philosophy. I reentered the workforce with the knowledge of how to be satisfied with life, whether in lean times or in plenty. I became involved in environmental hazards as an inspector and training provider for all disciplines dealing with residential lead hazards and safe work practices. It is just one way to leave this world a better place than I found it.

I enjoy philosophy but I do not worship the institutionalized God philosophy analyzes. I’m interested in serving the God who is personal and loving.