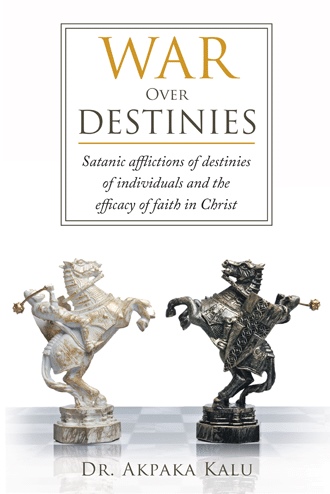 Sarah, barren! Rebecca, barren! Rachel, barren! Three successive generations of barrenness! That was the lot of the house of Abraham. Husband number one…dead! Husband number two…dead. And husband number three…denied, averting a third death. That was the life of Tamar. The one that was destined to birth Perez, one of the ancestors of Jesus Christ, was left a barren widow. Job’s businesses, property, children, well-being, health, and relationships were destroyed in one season – he who had children became like one who never had any; he who was prosperous with a booming agricultural business became a pauper; and he who was healthy became sick unto death. Job that had a great circle of family and friends became an outcast.

“How do you know that Satan is warring against your destiny?” you may ask. “What do you look out for?” I say, “Raise your index of suspicion. Look for repeated patterns of afflictions.”

War over Destinies explores the foundations of satanic oppression and the principles of attaining total deliverance from the schemes of the devil to control, use and misuse people and their estates. The book is designed to equip believers with the audacity to take a spiritual stand and fight for destinies. It is a call on all believers in truth and spirit to arise and decree their freedom from satanic snares and afflictions. It consists of a prologue, six chapters and an epilogue.

Prologue, lessons in spiritual warfare: This documents personal life experiences and convictions about the reality of satanic war over the destinies of individuals, families and communities. The chapter contends that victory lies in operating in the authority of the believer and further defines seven dimensions of believer’s authority: authority to confront the devil, his agents and all his powers including authority to cast out demons; authority to heal the sick; authority to will, decide or permit; authority to destroy, dethrone or uproot; authority to create, construct or restore; authority to restrain, confine or imprison; and authority to free or liberate.

Dimensions of destiny: Acknowledging the sovereignty of God to will and to do, the chapter defines destiny as a package of divine provision and platform for attaining divine purpose. Several concepts related to personal destiny and legacy destiny are presented: destiny-carrier; destination or destiny-place or destiny-land; destiny-giver; destiny-time; destiny-calendar; destiny-co-travellers; destiny-players; destiny-networking; destiny heritage; destiny-fore-bearer; destiny-heir; and destiny key-holder. The chapter concludes with Journeying to destiny by defining five stages in the journey to destiny: ordination; conception; gestation including validation of destiny, linkage with destiny players and platform development and resource mobilization; parturition; and formation.

Barren destinies, the satanic goal: The chapter confronts the reader with the discomfiting serial bareness in three successive generations of the house of Abraham – Sarah, Rebecca and Rachel, women ordained to birth the destiny transitional carriers in the first three generations after Abraham; serial deaths of Tamar’s successive husbands; and serial calamities in the life of Job spanning his businesses, property, children, well-being, health, and relationships – all in one season. Contending that bareness of the womb and bareness of all other spheres of life is the goal of Satan, the chapter concludes that war over destinies presents with patterns of evil across successive generations or patterns of successive wickedness or affliction in a person’s life or in the lives of his or her contemporaries of the same family or community. The chapter ends exploring three themes: barren destines the result of spiritual exile; spiritual exile, the result of sin; and ending barren destinies.

Ensnarement, the primary satanic strategy: This chapter defines snare as that good thing, that harmless thing, gift, question or activity put in place by a known, unknown, or friendly enemy or competitor as a scheme to trap and lead you to ruin; the devices of the Devil for taking many captive and making them lose their senses. The chapter ends with five sections: process of ensnarement; types of snares; the snare cocktail; ensnarement that destroys destinies; and ensnarement and the stages of the journey to destiny.

Open doors of satanic afflictions: Opening with the affirmation that open doors guarantee satanic access for affliction, the chapter ends in two sections: God’s impregnable wall of defence around the righteous; and sin and rebellion, the causes of open doors including subsections on open doors from personal sins and open doors form ancestral sins.

Believers audacity to fight for destiny: This chapter affirms the right and capacity of a believer to fight and reclaim own place and position; that a believer can ask God for deliverance and restoration; and that to attain and retain deliverance and restoration, a believer first needs mercy and grace before arising to fight.  The chapter has three sections: God’s mercy, the believers’ secret weapon; God’s grace, the believers’ strength in warfare; and arise and fight.

Epilogue, positioning for harvest: Instructing believers on post-deliverance attitudes and actions two main sections are presented here: things to mind – Satanic fighting back; issuing satanic reentry pass; weakness in faith; and dangers of sleep; and things to do –walk in righteousness and be subject to God’s pruning; fellowship in a bible-believing, bible-teaching, and prayerful ministry; and dwell in the ministry God planted you in.

War Over Destinies is an inspiring book of deliverance teachings—an exposé on dimensions of satanic afflictions of destinies of individuals and families and the overcoming power of faith in Christ. It is based on the Bible, divine revelations, and true stories of personal and ancestral involvement in idolatry, resultant satanic afflictions, and extraordinary deliverance.

A compilation of the lessons God so graciously taught me in my own journey, these are lessons from my personal experience of the rage and ravage of Satan and his agents in the life of a believer with idolatrous foundation. Also found are lessons on God’s assurance of victory and His abiding grace for overcoming the devices of the devil.

I share the lessons in the hope that they will both encourage and equip groups and individuals in their journeys to destiny in Christ.

War Over Destinies explores the foundations of satanic oppression and the principles of attaining total deliverance from the schemes of the devil to control, use, and misuse people and their estates. The book is designed to equip believers with the audacity to take a spiritual stand and fight for destinies—their own destinies as well as those of their families and estates. It is a call on all believers in truth and spirit to arise and decree their freedom from satanic snares and afflictions.