A Father’s Story of Loss & Hope 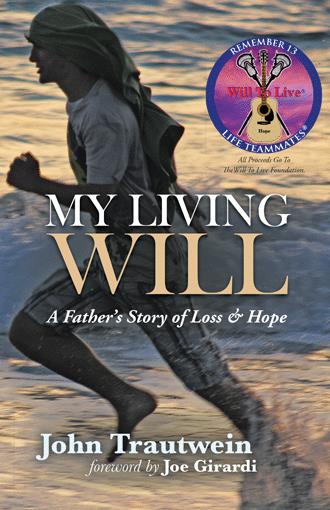 My alarm went off that mid-October morning. It was a Christmas song by Sugarland called “Gold and Green,” the same wake-up song I’d had since last Christmas some ten months before. It seemed to be a lucky song for me, so I decided not to change it when the holidays were over.

Being a former pro baseball player, I am rather superstitious, and ever since I selected that peaceful song as my wake-up alarm, my luck had indeed been improving. I was happy, work was good, my wife and I were great, and all four of my kids were healthy, beautiful, successful and happy. Yes, things were definitely going my way, so there was no way I was going to mess with a good thing and change my luck by changing my wake-up song. As Crash Davis said in Bull Durham, “You must respect a streak.”

When I turned off the alarm that Friday morning, the fifteenth of October 2010, I didn’t realize my life was about to change. Just seconds later I heard the scream.

It was unlike anything I had ever heard before. It was definitely Susie, and it was coming from upstairs. I thought maybe she twisted an ankle or dropped something heavy on her toes. Whatever it was, she was in a lot of pain, so I jumped out of bed and sprinted out of our main-floor master bedroom. The screaming was not going away, and I could feel the fear building up inside me as I realized something was very wrong with Susie. As I ran up the stairs, I heard her yell “Will!” I looked up to see the bedroom door to our oldest child’s room at the top of the stairs was just slightly open. Susie’s scream was now more of an uncontrolled sobbing. As I reached the top of the stairs, I also heard Will’s eleven-year-old brother, Mikey, screaming, “What, what?” as he hurried out his bedroom down the hall.

I remember stumbling on the steps as my bare feet slipped, but somehow I caught my balance and took the last steps three at a time. When I arrived at the top of the stairs, Susie was standing there in the hallway, screaming, with her hands covering her face. I had no idea what to expect, but I remember the feeling of pure panic coming over me as I felt my heart racing, pounding against my chest. Mikey was now in the hallway, standing behind Susie, an unbelievable look of fear all over his innocent face as he tried to decipher what he was hearing and seeing at that moment. His wide eyes met mine for a brief instant as he watched me stumble at great speed up the steps and into his big brother’s room.

As I entered Will’s room, the adrenaline in my body was pumping like never before. When I passed my wife, standing in the entranceway, I realized immediately I was no longer entering my boy’s bedroom. I was entering a new, unimaginable world full of such pain that I knew my life could never be the same again.

My Living Will is the story of former major league pitcher John Trautwein, and the unbelievable tragedy which befell him and his family when his fifteen-year-old son, Will, took his own life. There had been no warnings, no obvious signs of anxiety, depression, or unhappiness; nothing. A family and a community were left stunned as they pondered how a young man like Will Trautwein, a healthy, happy, popular, athletic, and musical teenager, who came from such a loving home, could lose the will to live.

“John Trautwein writes straight from the heart. And his words will save lives. The story Trautwein shares in these pages––a remarkable journey of passion and purpose––will literally save lives.”

“John Trautwein’s story inspires hope. It empowers people, and it gives its readers the ‘hope for life.’ The triumph that this story imparts arouses the goodness in everyone as it drives people toward action.”

“In my twenty-two years of broadcasting, I have told many stories of triumph over tragedy, but the story of Will Trautwein and his family has stayed with me. The loss of such a vibrant young man and the strength of his family to use their heartache to help has had an impact on how I parent my daughter, and how I report stories of teenage depression and suicide. This is a must-read if you have a teenager in your life.”

“Ever wonder if a young person in your own home might be at risk? Read this book. In “My Living Will,” John Trautwein takes the emotions of loss and turns them into a message of awareness and hope. A must read for parents and teenagers alike!”

John Trautwein, an ex-pitcher for the Boston Red Sox, is a successful business man living with his wife and children in Johns Creek, GA. He is an accomplished motivational speaker and runs the nonprofit Will To Live Foundation dedicated to raising the awareness of teen suicide in America.

“The Trautwein story is remarkable. Their work commands respect. Read this book, then reach out to someone in need.”

“Ever wonder if a young person in your own home might be at risk? Read this book. In “My Living Will,” John Trautwein takes the emotions of loss and turns them into a message of awareness and hope. A must read for parents and teenagers alike!”