Barefoot in the Boot

A Lost Boy's Journey to Freedom 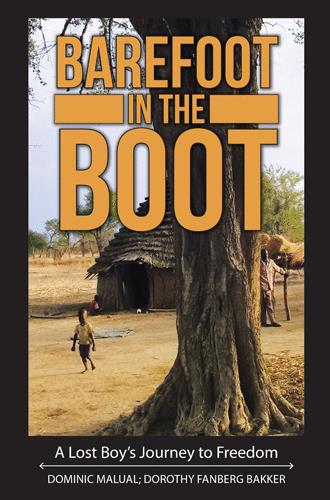 PART ONE
A Child of the Cattle Camps

They called me Deng Achel Anguam – the first of many nicknames I would acquire along the way. But there was a special reason behind the name. At the time I was born, my mother had already given birth to two daughters and three sons and she had nursed each one for more than a year. But when my time came, she was unable to nurse me because her breasts became swollen and she could not produce milk. Fortunately, however, she had a cow that she got milk from to feed me. That cow was called Achel Anguam, which in the language of my tribe, the Dinkas of southern Sudan, means “black cow with the horns facing downward.” Since that cow was the one who provided my nourishment, my mother nicknamed me after her. It’s fairly common for Dinka people to name a child after the color of a cow – but in my case, people who didn’t know, thought I was given the name because my own mother must had passed away.
My mother had one more baby after me – my sister Abuk, who was born when I was five. My mother had no problem nursing her – but first, let me tell you about Abuk. She was my mother’s seventh child, so for my mom, pregnancy was a very familiar experience. The people in our village, and especially our own family, anxiously awaited the birth of my mother’s baby; but Abuk didn’t come at the expected time. My mother had felt my sister moving and kicking in her belly for several months, but she just wasn’t ready to come out into the world.
Three months passed beyond Mother's due time, but still no baby.
“I think your baby is dead,” one of the village women told her.
“No,” Mother said. “My baby is okay. I can feel it moving.”
More months went by. My mother looked very pregnant, but she wasn’t gaining additional weight and she seemed to be in reasonably good health. But by this time, everyone was becoming quite concerned for her. Month after month the family watched her and they struggled to find a way to make her deliver the baby. As her pregnancy approached twenty-four months, they called her a “human elephant,” because that’s about how long it takes an elephant to give birth.
With nowhere else to turn, my daddy finally made the decision to take my mother to a medical hospital. This was a big decision on his part. because our people rely on traditional or tribal practitioners for medical issues – but no one as yet had been able to help my mother. The closest hospital was many miles away in Wau City and we had no means of transportation of our own. So my daddy had to hire a truck – the equivalent of taking a bus – in a nearby community to get my mother to the hospital. This was an important event for us and a whole family entourage accompanied my parents on foot to see them off. I was there too, trudging along the dusty road while keeping close to my mother’s side.
This was definitely a new experience for me and when we reached our destination, I was a little frightened by the strange animal that stood quietly waiting for us. It seemed harmless enough, but I was curious about the odd-looking round legs and huge eyes of the beast. Then my daddy’s friend, Rind Deng, stepped inside and sat down. “What kind of animal is this,” I asked my big brother, Mayom. “And why do you sit inside it instead of riding on top?”
“It’s not an animal,” he said, amused at my question. “It’s a Thurumbil,” he explained, speaking the Dinka word for “motor vehicle.” I had never seen any type of machinery before and I was in awe of this thing that was going to take my mother to Wau City to get our new baby.
We said our goodbyes and my daddy helped my mother into the cab of the truck where she sat alongside the driver. Then Daddy and his friend Rind Deng and my brother Mayom climbed into the truck bed along with more than a dozen other passengers who were also going to Wau and I returned home with the other family members who had seen my parents off.
The roads of south Sudan are extremely treacherous in places, and on the way the driver lost control of the truck, causing it to roll down an embankment. It was a terrible accident that left ten passengers dead. My father suffered a deep cut on his thigh and his friend Rind bit his tongue and nearly severed it. My brother Mayom was saved by landing safely in the top branches of a tree and my mother was saved by God.
The survivors were all taken to the hospital in Wau City for treatment. The men had their wounds cleaned and stitched and the doctors tended to my mother. After thorough examination, they agreed that her baby was definitely well past due, but they told my daddy that, unfortunately, there was nothing they could do for her there. “The reason the baby won’t come,” one doctor explained, “is because it can’t. It is attached to her back, right by her spine. This is unheard of – I’ve delivered many babies, but have never seen anything like this before. Surgery is not an option – it would be too dangerous to even risk.” They told Daddy to take my mother home and consult traditional tribal doctors (witch doctors) or powerful spiritual leaders to cure my mother of her long pregnancy.

Barefoot in the Boot is a detailed and enlightening account of the life of a young Dinka boy from South Sudan. As a child of war, Dominic Malual fled his home at the age of seven, seeking safety from a brutal attack on his village. He traveled hundreds of miles enduring years of danger, loneliness and separation while struggling to reach the refugee camps in Ethiopia and Kenya in search of his family. During Sudan’s civil war, many children fled for their lives - by some estimates at least twenty thousand. Dominic Malual’s story focuses on the challenges he and the other boys faced as they struggled to stay alive. One cannot help but be inspired by the boys’ creativity in searching for food to avoid starvation, and their determination to live for even one more day.

Dominic Malual came to the United States as a refugee at seventeen and enlisted in the US army at twenty-one. While serving as an infantryman in Iraq, he began writing down memories of his village and the customs of his people, the Dinka of South Sudan. He also documented his life as a US soldier. At a family dinner in Michigan, he shared his journal with Dorothy Bakker, and expressed his desire to have it published. Impressed by his story, Dorothy offered to help make Barefoot in the Boot become a reality.


Dorothy Fanberg Bakker has skillfully captured the essence of young Malual’s life. By digging deep into his childhood, she has brought to life his many struggles to survive. Her use of detail, dialogue, and occasionally humor, draws the reader into the times and places where the story occurs.