It’s Too Soon To Quit

A Story of Hope

by Dr. Jeanne A. Svobodny 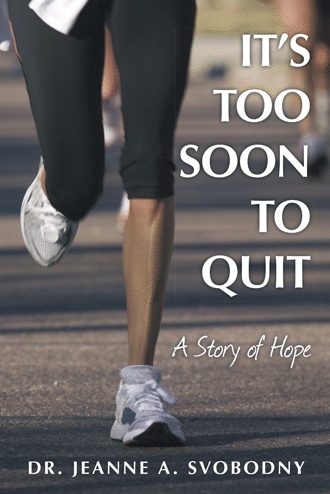 I survived six terrifying years. Each morning I awoke filled with fear and an impending sense of doom. No matter what I did, unexpected fear overcame me as I moved throughout the day – whether driving, teaching, talking with friends, attending meetings, worshiping in church or playing with my young daughters. I was constantly afraid – my heart beat extremely fast, my ears rang loudly, my hands became sweaty. I couldn’t get a deep breath and I felt the need to quickly escape whatever situation I was in. I could not concentrate on anything but surviving these horrible sensations.

God has been nudging me for a long time to share my story with others. Finally, I have the courage to do so. My hope is that those experiencing a time of suffering will know that they too will live through it and be strengthened in the process. Maybe you are experiencing the loss of a loved one, a physical challenge, a broken marriage, a financial crisis or a mental illness. My particular time of suffering was the result of an unexpected mental health condition. If you are currently suffering through some difficult situation, know that through God’s love and grace – it will get better and you will become even stronger than before. God will be there for you to lean on. If you are experiencing a mental health challenge, know you aren’t going crazy. God has a purpose for what you are going through and He will deliver you with His “mighty right hand” (Isaiah 41:10) as He did me.

What is happening to me? Why am I constantly terrified? Why are these strange and scary feelings plaguing me and robbing me of life’s joys? Why won’t they go away? What is wrong? Why Lord? Why won’t you rescue me?

Jeanne Svobodny asked these questions during a very difficult time in her life. Jeanne had experienced what she describes as an idyllic life as a Christian wife, mother, daughter, teacher, and athlete until she unexpectedly experienced overwhelming fear. The physical sensations she repeatedly felt as a result of horrific fear including rapid heartbeats, nausea, dizziness, sweating, chills, and loud ringing in her ears were petrifying and shook her confidence to the core.

In It’s Too Soon to Quit, this determined woman describes her journey coping with an unexpected season in her life which was filled with dreadful panic attacks. By writing her story, Jeanne hopes the lessons she learned will bring hope to others who may be going through a similar season of suffering.

Jeanne vulnerably shares her early experiences with extreme anxiety and her later diagnosis of panic disorder. Because of the severity of the attacks, she thought she was going crazy. Functioning through simple, routine daily tasks became extremely challenging for her. After many years of living with excruciating fear while searching for answers, relief finally arrived.

Read about the amazing promises of God and His personal whispers which sustained Jeanne during this season of her life. Take heart and “Run with perseverance, the race that is set before you” (Hebrews 12:1-3) and “Let the peace of God guard your hearts and minds” (Colossians 3:15).

Dr. Jeanne A. Svobodny is a successful school administrator, wife, mother and grandmother who shares her story of living with a severe panic disorder. By writing in a very personal and vulnerable style, Jeanne hopes to encourage others who are experiencing a season of suffering and/or despair.