Something Stewing in a Cracked Pot 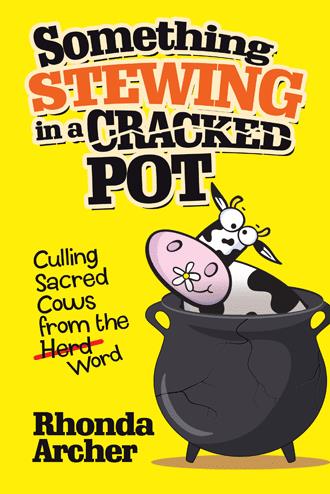 One lunch when we were teenagers, Kay was eating only a grapefruit while I was enjoying our standard meal of meat, mashed potatoes and milk gravy. After grandpa gave Kay his “you need to put meat on those bones” talk, he looked at me when he said, “I never have to worry about Rhonda not eating.”

Come to think of it, all the food metaphors contained in God’s Word might have something to do with my love for it. Jesus even said that He hangs out with the one who continually chews His flesh and drinks His blood. Which is a kind of strange way of saying we are to break His Word into small horse d’oovers (Or is it hors d’oeuvres?) to study, think about, then swallow it in order to properly absorb His Word so Its Wisdom steers our behavior.

Whoever wrote the book of Hebrews used milk and solid food to illustrate Biblical maturity levels. To nourish their spiritual life, newborn-again folks need the unadulterated spiritual milk of a mother’s teaching (Old Testament Teachings) to help them out grow deceitfulness, pretentiousness, jealously and slander. A few newbies become contented to having someone else spoon feed them “grapefruit teachings” to satisfy their emotional needs instead of developing their life of faith by learning to eat for themselves. By settling for a grapefruit-mental-assent-to-Truth diet they risk being spiritual skinnies easily shaken when troubles blow in and get carried about by every windy myth or rules set up by men who have turned their backs on didache’, the doctrine authored by God Himself.

Jesus taught from the Torah; the only Teachings that can put meat on your spiritual bones and gives us strength to train by practice the discernment required for distinguishing Truth from its cross-breed look alike.

The aim of God’s Teachings (Torah) is to “love out of clean heart a good conscience and sincere faith, from which, when some missed the mark they turned away to fruitless talk wanting to be teachers of Torah (Teaching), although they understood neither what they were saying nor about what they were confidently insisting. But we know that the Torah (Teaching) is good…” (1 Timothy 1:5-8, emphasis mine)

Contrary to popular belief, Paul does not give the Torah a bad rap in his first letter to Timothy but points out they share the understanding that God’s Teaching is good. Both of them would’ve known the word for Torah, yarah, has the connotation of when a teacher’s instructions “hits the mark” it has penetrated the heart similar to an arrow hitting its target.

Ouch! I guess Truth does hurt.

In Matthew 24:4, Jesus warns that we are not to be deceived by fancy talking bad shots who missed the mark and won’t get to enter His Kingdom with the ones on the mark who do His Father’s will.

Proverbs 1:5-9 can help our aim. Succulent wisdom starts with planting reverence for the LORD. Only fools despise the instructions and self-discipline required to grow in knowledge of His Truth.

Along with the victor’s garland of grace on the head, kingly chains and pendants will hang around the neck of anyone willing to listen up to their Father’s Instructions and stop rejecting their mother’s teachings (Torah).

The recipe instructions in Deuteronomy 14:2 of not cooking a goat in its mother’s milkties a mother’s teaching (Torah) with milk. Boiling deception with Torah not only toughens the meat of God’s Word but makes it steer-ile.

For any city folk who might not know, a bull becomes a steer (sterile) when his “ability to reproduce life” is cut off through castration. Farmers use this method to make bulls easier to control. That’s why this farm girl can see how teachers who say no-one needs to keep the Word of Life have led many into the error of steer-ile beliefs by depriving them of the power to bear fruit.

The sheer number of denominations that exist today would seem to contradict my premise that de-seeded fruits don’t multiply. Unless you take into account the church splits after a few stubborn old goats butted heads then I can still maintain steer-ile beliefs don’t multiply; they divide.

Mostly we think of a “stubborn old goat” as someone set in their ways and are very resistant to change but goats were linked with deception in Genesis 27:16-17 and 37: 31. Rebecca used goat hair and meat to help her son deceive his dad, Isaac, into thinking Jacob was Esau to get the first born blessing. This deception’s payback would pierce Jacob’s heart when his oldest sons used blood from a goat to trick him into thinking Joseph was dead.

“Brothers” are still around who like to twist the Truth with the aim of leading God’s chosen into the ditch. Oh they will be protesting on the day of judgment that they prophesied, drove out demons, did miracles all in His Name but no amount of pleading on their part will make Jesus pencil their names into His Book of Life. Jesus will banish from His presence those who disregarded His commands and say He never knew them.

Naturally, Jesus has a mental awareness of every person but according to Matthew 7:21-23, He will cull anyone who has an utter disregard for His written Word and does not have the covenant right (similar to wedding vows) to take His Name.

Jesus assures us in John 14:12-15 that anyone who believes in Him as Savior would do the things that He was do-ing; and do even greater things than what He did because He was going to the One Who does not change but remains faithful to His covenant with us. That is why whatever we, as His representatives, ask in His Name He will do so our Father is glorified and His Son celebrated. If we really love Him, we would happily keep and obey His commandments.

Similarly to how the True Farmer prunes unfruitful branches in favor of the prolific branches, a dairy farmer increases the value of his herd by culling unproductive cows. No calves. No milk. No moo-la. Steer-ile Bible herd mentalities need to be culled from our happy God’s Unadulterated Teachings before they cheapen grace by failing to reproduce hope in a fractured world. Something Stewing in a Cracked Pot cooks up a fresh off the farm field of vision that is:
Sprinkled with wit
Spiced with a hint of Hebraic perspective
Seasoned with covenants
Stirred, not shaken, in faith
Served from a recovering perfectionist pot
Taking the practice of culling from the cow kingdom into God’s, Rhonda Archer moo-ves out udder-ly absurd cultural assumptions then opens the gates so restored thinkers will be as free and happy as calves let out to pasture.

As a child growing up on an Oklahoma dairy farm, Rhonda Archer would use her off-key serenading to move cows between connecting pastures. Finally grasping there would be no fruition of her dream of being an opera singer, she became an avid silent reader which sparked her burning curiosity. Now she hopes to use the cattle prod of words to stoke the fiery want-to-knower inner child in others so their outlook moo-ves from the world’s field into their Heavenly Father’s Kingdom. She met and married her husband of forty-three years, Scott, in New Mexico. Now they reside in Alabama with their cattle dog, Mr. Favor.